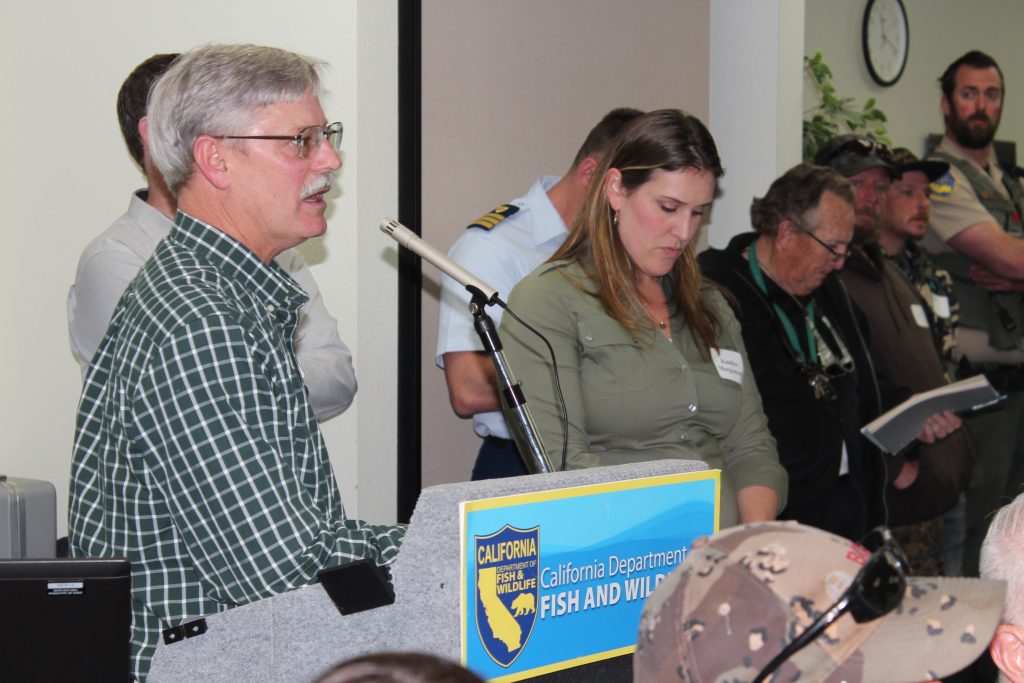 There is no doubt there will be ocean and inland recreational fishing seasons targeting Sacramento and Klamath River fall Chinook salmon this season, but the exact length and scope of those seasons will be determined in upcoming meetings at the Pacific Fishery Management Council (PFMC) and California Fish and Game Commission. Anglers can expect increased restrictions on some fisheries.

The adult returns of both stocks were well below minimum escapement goals in 2017, while the projected abundance for both stocks is modest compared to historic averages. The data released on March 1 will help to craft the ocean and in river salmon seasons developed by the federal and state governments this year.

The 2017 spawning escapement of Sacramento River fall run Chinooks was only 44,574 adults, reported Vanessa Gusman, CDFW environmental scientist. This is well below the conservation goal range of 122,000 to 180,000 fish. The fish included 27,039 hatchery fish and 17,535 natural origin fish.

The 2017 Klamath Basin fall Chinook run was the 5th lowest in 39 years of records and 43 percent of the 39-year average. All recreational ocean and in river fishing for Klamath and Trinity River Fall Chinooks was closed last year, due to the projected low return.

The stock is now considered to be in an “overfished” state, meaning that a Conservation Plan must be developed to recover the fishery.

On the positive side, the state and federal fishery scientists reported an increase in the number of jacks (two-year-old Chinook) that returned to spawn in 2017 in both the Sacramento and Klamath-Trinity river systems.

The 2017 Sacramento River jack counts were well above normal. A total of 24,375 jacks returned to the Upper Sacramento, Feather River and American River Basins in 201.

Likewise, the number of 2-year-old grilse (also called jacks and jills) in the Klamath is 21,903, above the long term average and a precursor for age three abundance, said Sinnen.

The Sacramento River fall Chinook forecast is comparable to last year (down slightly) but there are greater numbers of Klamath River fall Chinook projected to be swimming in the ocean this year. Fall Chinook from these runs typically comprise the majority of salmon taken in California’s ocean and inland fisheries.

“The Sacramento Index forecast is nearly identical to the 2017 forecast,” said Dr. O’Farrell of the National Marine Fisheries Servic e. “2018 management must target an escapement of at least 122,000, a 46.8 percent exploitation rate.”

If the 2017 regulations were in place now, it would provide for a preliminary escapement prediction of 134,900. “This stock is likely to constrain 2018 fisheries,” said O’Farrell.

In addition to being subject to the Sacramento Index, fishing for Sacramento River stocks is also constrained by the status winter run Chinook salmon, a species listed under both the federal and state Endangered Species Acts.

As in previous years, this is likely to constrain 2018 fisheries south of Point Arena on the Mendocino Coast. O’Farrell stated.

This could constrain 2018 fisheries south of Cape Falcon, Oregon.

Why the low numbers in 2017? Morse said the effects of the recent drought are still impacting California’s salmon populations. “Outbound juvenile Chinook suffered unusually high mortality because of low flows and high water temperatures in both the Sacramento and Klamath watersheds in 2014 and 2015,” said Morse.

In addition, representatives of fishing and environmental groups and Tribes cited the mismanagement of the storage reservoirs and river releases and massive water exports to corporate agribusiness and Southern California water agencies as key factors in the salmon declines.

The outlook for salmon fishing this season depends on who you talk to.

“If I were a commercial troller, the information released at yesterday’s meeting would be good news, since the commercial season was severely constrained by the Klamath River runs last season,” said Marc Gorelnik, a member of the Pacific Fishery Management Council (PFMC) representing recreational anglers. “This won’t be the case this year. The commercial trollers should have more time on the water.”

“However, this means that the recreational fisherman will be going to have to share the fish more with the commercials,” said Gorelnik. “It was a pretty good season for the sport anglers last year. That is probably not going to happen again this year with the increased fishing pressure. I would expect a less generous season for sport fishermen as the commercials get to spend more time on the water.”

“I would not expect a complete closure, but I would expect the state and federal governments to be less generous,” he said.

The inland fishing seasons on the Sacramento, Feather and American Rivers could face cutbacks in order to allow more salmon to return to fish hatcheries and natural spawning areas this season, but that is yet to be determined.

“The inland season on the Sacramento River could be a huge problem, with 60,000 fish estimated contacted last year, way more than expected,” Gorelnik added.

Dick Pool, the Secretary of GGSA and President of Pro-Troll said, “The low 2017 adult return figures we heard at the meeting were very disturbing. Some of them are all time record lows. Even under the best of circumstances, salmon fishing this year is going to be curtailed again.”

“It is not the fault of the fishermen,” Pool emphasized. “The problems are the low survival of the juveniles in the rivers and in the Delta. There are solutions and the State and Federal Governments need to step up and fix them while it is still possible.”

Over the next two months, the PFMC will use the 2018 fall Chinook ocean abundance forecasts, in addition to information on the status of endangered Sacramento River winter Chinook, to set ocean sport and commercial fishing season dates, commercial quotas and size and bag limits, according to the CDFW. A range of three alternatives will be proposed, from which one will be chosen at the April PFMC meeting.

Concurrently, fishery managers with the California Department of Fish and Wildlife (CDFW) will be working to develop a suite of recommendations for the California Fish and Game Commission (FGC) to consider on 2018 fishing seasons, size limits and bag limits for Chinook salmon river fishing in the Klamath/Trinity and Sacramento River basins. For more information, please visit the FGC Sport Fishing Regulations website.

For the latest inland salmon season regulations in the Klamath/Trinity basin, call (800) 564-6479, and in the Central Valley, please visit the CDFW Freshwater Sport Fishing Regulations website.