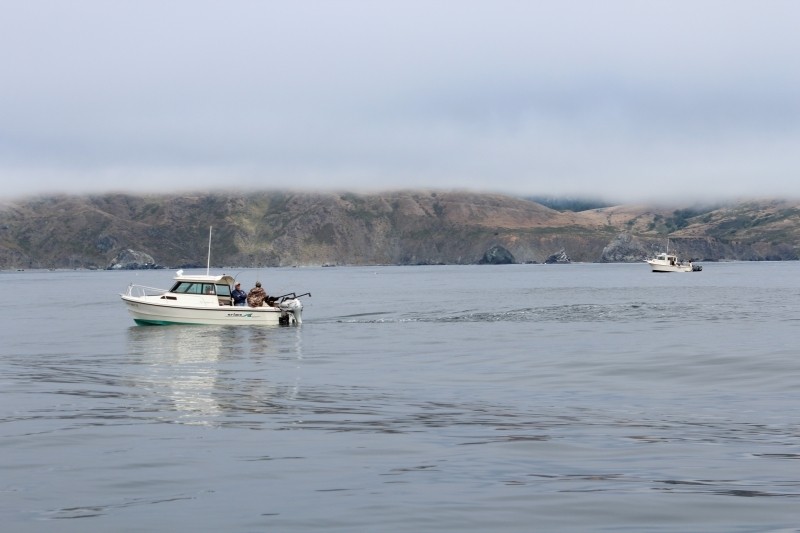 The opening of California’s recreational ocean salmon season from Point Arena to Pigeon Point on the first Saturday in April has been a fond tradition for anglers for many years — but it won’t happen this year, due to low numbers of Klamath and Sacramento River salmon returns three years in a row.

The Pacific Fishery Management Council (PFMC) at its March meeting in Rohnert Park, California, made the decision to open only a limited section of the California coast on April 7.

The low numbers of fish were spurred by a combination of drought conditions, water diversions and poor water and fish management by the state and federal governments.

California’s recreational salmon fishery will open in ocean waters on Saturday, April 7 from Pigeon Point (37° 11’ 00” N. latitude) south to the U.S./Mexico border, according to the California Department of Fish and Wildlife (CDFW).

The season in that region, including both the Monterey North and Monterey South management area, will be open to fishing for all salmon except coho, with a limit of two fish per day. The Chinook minimum size limit will be 24 inches total length; and the same gear restrictions will apply as in 2017. However, this fishery may be modified at the March Council meeting, according to the PFMC.

The recreational salmon fishery will remain closed in all other areas off California during the month of April.

The PFMC meeting followed a March 1 salmon fishery information meeting in Santa Rosa where many anglers left scratching their heads, due to favorable counts of two-year-old salmon (jacks and jills) that have been used to forecast ocean salmon abundance, offset by three years of low Klamath and Sacramento returns that didn’t meet their conservation goals.

This is the first time that the season from Pigeon Point to Point Arena hasn’t opened on the first Saturday in April since the Central Valley salmon collapse of 2008-2010, a disaster caused by a “perfect storm” combining poor ocean conditions, massive water exports out of the Delta and again, poor water and fish management by the state and federal governments.

On a positive note, the Klamath Management Zone will be reopened in both California and Oregon this year, due to improved forecasts of Klamath River fall Chinook abundance in 2018 compared to 2017.

All recreational and commercial fishing for Klamath River fall Chinook salmon was closed last season, along with the inland recreational season in the Klamath and Trinity rivers and the Yurok Tribe’s commercial salmon fishery. The Yurok and Hoopa Valley tribes had a very limited subsistence fall Chinook fishery in 2017, while the Karuk Tribe decided to limit its traditional dip net fishery at Ishi-Pishi Falls.

The Council developed alternatives for 2018 fisheries to allow for spawning escapement in excess of what is required under the Salmon Fishery Management Plan in an effort to begin rebuilding both Klamath River fall Chinook and Sacramento River fall Chinooks.

Morgenstern said fishing seasons “are being curtailed this year in an effort to increase spawner escapement to the Sacramento and Klamath river basins in 2018.”

California is not the only state that will see salmon fishing cutbacks. Salmon seasons in Oregon and Washington have been crafted to protect coho runs and lower Columbia River natural tule fall Chinook.

“Although some abundance forecasts are improved over last year, the 2018 salmon runs still present a challenge for ocean fishermen and managers throughout the west coast,” said Chuck Tracy, Executive Director of the PFMC.  “In the north, low returns of some Puget Sound and Washington coastal coho runs and lower Columbia River natural tule fall Chinook will constrain fisheries. In the south, the conservation needs of Sacramento River fall Chinook and Rogue/Klamath coho will constrain fisheries.”

Council Chair Phil Anderson added, “Once again, the Council adopted a range of management alternatives for public review designed to conserve and rebuild a broad range of Chinook and coho stocks of concern. Commercial and recreational fisheries will face restrictions in areas along the entire west coast in response to the Council’s conservation efforts.”

“I’m very disappointed but not surprised by the cancellation of the opener,” said Richard Pool, the Secretary for the Golden Gate Salmon Association (GGSA). “The runs are in bad shape. It’s not the fault of the fishermen, but I’m not surprised that adjustments have to be made this season.”

“The problem is the low survival of the juvenile salmon in the rivers and in the Delta. There are solutions and the State and Federal Governments need to step up and implement them while it is still possible,” said Pool.

This is the second lowest return ever. In 2009, when the fishing industry was shut down, the return was 40,873.

The 2017 Klamath Basin fall Chinook run was the 5th lowest in 39 years of records and 43 percent of the 39-year average.

The number of 2-year-old grilse (also called jacks and jills) in the Klamath is 21,903, above the long term average and a precursor for age three abundance.

Commercial season alternatives south of the Klamath Management Zone are also restricted this year to protect Sacramento River fall Chinook. All areas are limited to about two to three months of fishing or less, according to the PFMC.

Salmon seasons beginning on or after May 1 will be decided during the April 5-11 PFMC meeting in Portland, Oregon. The PFMC is considering alternatives for California’s 2018 commercial and recreational ocean salmon regulations, including season dates and size limits.

The public is encouraged to comment at a hearing on Tuesday, March 27 at 7 p.m., at the Laurel Inn and Conference Center, 801 West Laurel Drive in Salinas. Comments can also be submitted through the PFMC website at www.pcouncil.org.

The Council will forward its final season recommendations to National Marine Fisheries Service for its approval and implementation by May 1.

Public notification of any in-season change to conform state regulations to federal regulations is made through the NMFS ocean salmon hotline at (800) 662-9825.