My wife Gena has caught a lot of big fish, including 100 pound tuna, 30 pound yellowtail, a 40 plus pound striper and a huge jack crevalle that was within a pound of the world record!
The one fish that she really wants to catch that has eluded her is a big trout. She isn’t particular whether it’s a rainbow or a brown, but she has made clear mackinaw don’t count.
For Gena “big” is 8 pounds. She’s gotten a few rainbows around 5 pounds and her biggest overall trout so far was a 6 pound silver color phase brown that she caught at the mouth of the McCloud River Arm on Lake Shasta. That husky brown smashed a Silver Horde salmon spoon trolled beneath a big bait ball.
Last week, Gena’s hunt for a trophy trout was elevated to a whole new level when she finally hit the water with Captain Bryan Roccucci of Big Daddy’s Guide Service. She has known for a long time that Lake Almanor is full of big browns and rainbows and that fish in the 8 pound class are not uncommon at the Plumas County impoundment.
A couple years ago she decided that she really wanted to fish the lake with Roccucci, but it can be tough to get a date on Bryan’s boat during Almanor’s early spring trophy season that typically takes place in March and early April.
This year when I dropped into Bryan’s booth at the January Sacramento ISE show I asked about a date and he revealed a couple openings in early April. Bryan penciled in our names and April 2 was officially the date when Gena would attempt to trade punches with a Lake Almanor monster! 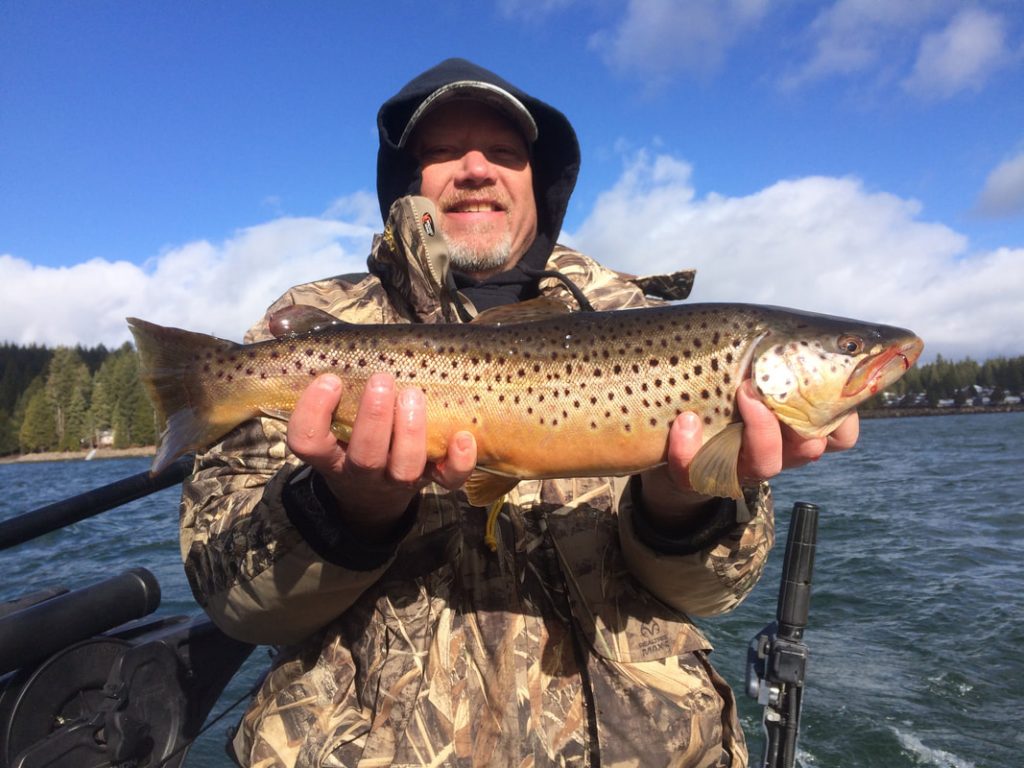 Gena and I along with our Labrador Lucy arrived in Chester on the shores of Lake Almanor the afternoon before our trip with Bryan. After checking into our hotel, we decided to go exploring around the lake and give Lucy a chance run off some energy.
We ended up at an area of the lake on the west shore where a large cement structure pulls water out of Almanor and pumps it up to Butte Lake.
After playing with Lucy in the snow for a while I decided to make a few casts with a spinning rod armed with a countdown Yo-Zuri.
I was about 6 casts in when I noted a dark shadow following the lure. The trout followed the plug right into the rocks without actually touching it and basically ran aground.
The husky brown trout panicked, thrashed and them made a wild arching leap back into open water. From the memory burned into my mind, I’m confident that the fish weighed at least 5 pounds and it was likely over 6!
Of course, I made 956 more casts with zero action, but it didn’t matter. We’d yet to actually step into a boat and we’d already come face to face with a nice brown…
“Tomorrow might be the day,” I ribbed Gena on the way back to Chester.

Gena, Lucy and I met Bryan at the Canyon Dam launch ramp early the next morning. As Bryan got the rods ready, I got busy setting up my cameras.
The plan for the day was to cover maximum ground while top lining 4 inch minnow plugs from various manufacturers.
Bryan and I would tend the rods and cameras and Gena was going to fight all the fish. Bryan’s clients had landed fish well into the 7 pound class the previous week and I felt a shiver of excitement when the plugs went into the water the first time.
We trolled for a little while before the first strike came. The fish was hooked initially but quickly tossed the lure. The next fish that came knocking also got away.
Fish No. 3 wasn’t so lucky. The hooks were anchored securely to the trout’s mouth and Gena successfully brought a beautiful 3 to 4 pound brown to the boat. The fish was quickly unhooked and released.
Gene followed up on the brown with a couple rainbows in the 18 inch class and then lost a brown about 20 feet behind the boat that looked to be a carbon copy of the first trout she landed.
By late morning the bite had slowed down a hair but we were still getting hits. I’m still scratching my head about one strike in particular.
I happened to be standing next to the rod when it went off. I slipped the rod out of the holder to hand it to Gena. The fish felt really powerful and it was pulling line off the reel against the drag when I handed it over to Gena.
Gena fought the fish for a while and from all appearances it was a big trout, but then Gena thought she’s lost the fish. Yet Bryan and I could still see head shaking on the rod tip.
“Don’t stop reeling,” Bryan instructed. “There is still a fish on the line.”
When the fish appeared behind the boat I was dumbfounded. It was a king salmon that might have stretched to 14 inches. Hardly the sort of fish that doubles over trolling rods and smokes line off reels.
I’m convinced that Gena had a good trout on the line. I think it shook the hook and when it did there was an ambitious salmon loitering nearby ready to grab the plug when it pulled loose. Of course, we’ll never know what exactly happened, but I have my theory.
I’d like to say that Gena’s big bite came at the end of the day, but it didn’t. Gena finished up with a total of 2 rainbows, 2 kings and one colorful brown.
Gena hasn’t given up on Lake Almanor or Bryan Roccucci. She is already planning next spring’s Almanor trophy hunt.
I’m confident that Gena will eventually get her trophy trout because she isn’t willing to give up!
If you’d like to hit the waters of Lake Almanor, Bucks Lake, Eagle Lake, Tahoe or Davis, give Bryan Roccucci of Big Daddy’s Guide Service a call and he will put you on the fish (530) 370-1001.