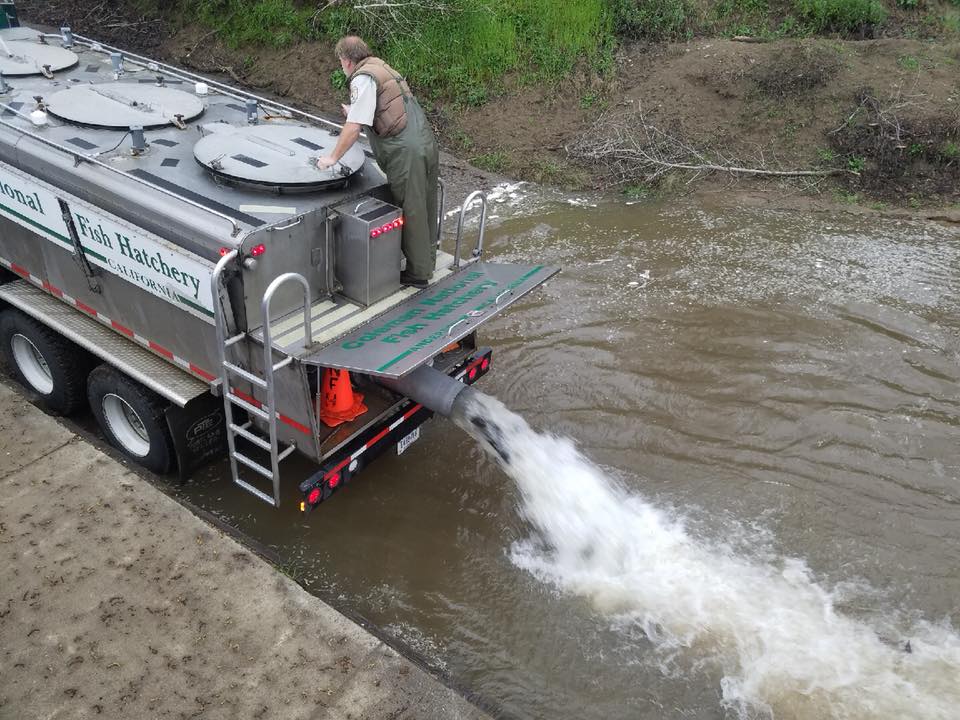 Fred Myer, the California Department of Fish and Game fishery biologist for many years on the American River, used to say that steelhead often do well in years that salmon don’t and vice versa.

That was definitely the case when the Coleman National Fish Hatchery saw a record high steelhead run and record low fall Chinook salmon run in the fall of 2017.

Coleman Fish Hatchery staff released a total of 5,000 steelhead kelts in late March into the Sacramento River at the Bend Bridge boat ramp over a three-day period.  The fish released into the river were those that survived out of the 10,612 fish that returned to the facility on Battle Creek.

The fish averaged about 17-1/2 inches each, according to Brett Galean Project Leader, Coleman National Fish Hatchery, U.S. Fish and Wildlife Service.  “We released 2,000 fish the first two days, Thursday and Friday, and then the remaining thousand the next day,” said Galean.

After spawning the fish, they put them in a large outside pond where they are reconditioned before being released into Battle Creek. Typically, 75 percent of the fish die, said Galean.

“When we recondition them, we feed them floating pelted fish feed and salmon eggs to get their weight back on. We also put on sprinklers to break up surface tension so birds see them as well.,” said Galean,

Galean said they typically release the fish into Battle Creek in late March or April. “This year it was different and we released the fish into the main stem Sacramento,” he noted.

He cited three reasons why it was different this year.

First, the federal government and other agencies reintroduced winter run Chinook juveniles into Battle Creek this year as part of a big restoration project, so they didn’t want the fish preying on the winter run Chinooks.

Secondly, they typically release 200 to 500 kelts back into the river after spawning. This year they had 5,000 kelts, by comparison.

“Our thought is that if would put in the main stem and spread them out, it would be better for the winter-run chinook and fall chinook salmon released,” Galean stated.

Third, the water conditions were ideal for the release and they took advantage of the high flows on the river, due to the March storms that hit northern California.

“The Sacramento came up 6 to 7 feet last week, so the high flows would provide ideal conditions get fish to work downriver. Normally they would be released in April back into the river,” he stated.

Galean said the kelts are 100 percent adipose clipped so they are easily identifiable by anglers fishing on the river.

By the end of November, the hatchery had already trapped 9579 steelhead. “It was a tremendous run. I’m optimistic a lot of fish we released will return to the hatchery larger in size later this year,” he said.

In contrast with the record steelhead run, the fall salmon run was a record low for the hatchery. What counts for the disparity?

Galean said the steelhead that returned as adults this season were released in January 2016 when the Sacramento river was flowing at 10,000 to 20,000 cfs.

“The flows really helped, along with the turbidity. It was good conditions for the fish to make it to the ocean,” he noted.

“The Nor-Cal Guides & Sportsmen’s Association stayed in contact with us and was aware of and supportive of this effort,” said Galean.

Robert Weese, Treasurer of Nor-Cal Guides & Sportsmen’s Association, said, “We are very pleased to announce the CNFW decided upon our organizations’ recommendation to release all of the steelhead kelts back into the river. Over 5000 adult steelhead were saved.”

Weese said he went up to the hatchery in December and took some photos as he and the hatchery manager talked about the winter run. They also discussed the record run of steelhead at the hatchery.

“I asked him to put the steelhead into the river,” said Weese. “In the river, there were no natural salmon spawners this year when I did three natural snorkel surveys. The steelhead would have no competitors.”

Galean said he would consider the suggestion, according to Weese. “We had an ongoing conversation and then they decided to put the steelhead back in the river. I believe that the pressure from the guides association accomplished this,” said Weese.

“It is definitely a victory because we had good interaction with the fish hatchery staff and got the fish back into the river by talking to the staff” he noted.

“It is so important to get more information on how many fish are actually in the river,” emphasized Weese. “The U.S. Fish and Wildlife Service haven’t done studies on how many natural spawners are in the river. Being a fishing guide and a member of a sportsmen’s association gives us the opportunity to see what’s going on in the river.”

In contrast with the big number of steelhead returning, a total of only 5500 fall run salmon, the lowest number ever, returned to the system in 2017.

“When the steelhead were released, there were good flows being released into the Sacramento River at the same time that the salmon numbers were so low,” explained Weese.

“The hatchery staff trucked the salmon and my theory is where they were released, they ended up dying and not going anywhere. They released 12,000,000 smolts. Stray rates are not the problem, in my opinion. It either has to do with the time spent in the truck or because the food supply is low,” said Weese.

In addition to promoting the release of steelhead into the Sacramento at the Bend Bridge, Weese noted that the guides association currently is working on a project to get sediment removal going on the Feather River, where it is creating a problem for navigation.

Weese also noted that the organization successfully pressured DWR to provide pulse flows on the Feather River to help the fall Chinook salmon smolts migrate out of the system.

For more information about the association’s many projects, go to: http://ncgasa.org

About the Nor-Cal Guides & Sportsmen’s Association: “The Nor-Cal Guides & Sportsmen’s Association is an organization which brings guides & sportsmen together to protect and increase hunting and fishing opportunities in Northern California! We work closely with many other conservation organizations to make sure our children and grandchildren have more fish and animals. Our organization acts as a powerful voice to represent all people who use Northern California’s waterways and lands. Fishermen who use our rivers have the most experience and knowledge on what’s truly happening to our rivers and lakes. Hunters who use our lands daily have the most knowledge on our lands and it’s needs. Together, we are the Sportsmen’s Voice”