No fish gets me more excited than steelhead, whether I catch these often-elusive fish on a river or on a reservoir. I love their hard strikes, their unpredictable and often spectacular battles, and the beautiful photo targets they make after you land them, as well as their propensity to take a wide array of baits, lures and flies.

As several TV and newspaper reporters awaited at the boat ramp at Larkin Avenue, two California Department of Fish and Wildlife (CDFW) Feather River Hatchery trucks drove down to the water and stocked the second batch of 49,944 steelhead that day. 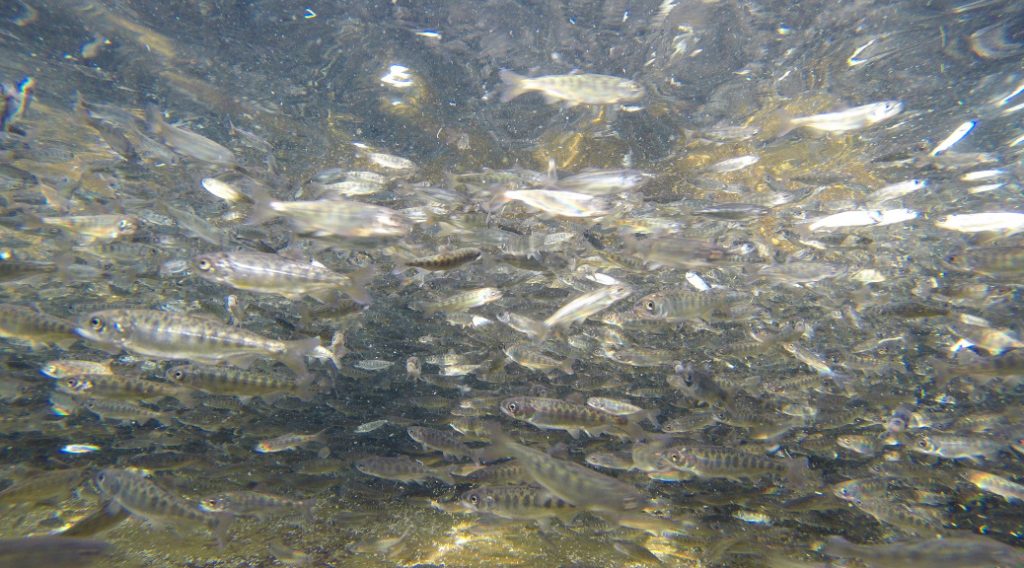 The last plant brings the total number of steelhead stocked in the Afterbay this season to over 231,682, according to Penny Crawshaw, hatchery manager 2.

The facility was hoping to release these fish at a catchable size of two to the pound, but the water temperature was too cold to produce the conditions for the fish growing quickly this winter. The fish ended up being between three and four to the pounds when released.

The landlocked steelhead fishery at the afterbay has been a very popular fishery since it first started in 2007 when the hatchery planted 10,000 juvenile steelhead in the afterbay.

The hatchery workers stocked 181,738 of the put and grow fish, starting at 11 to the pound and finishing at 8 to the pound in January, February and March. These were followed by the 49,944 “put and take” steelhead between three and four to the pounds that were stocked on April 4. (The remainder of the fish are earmarked for the kid’s fishing derby to be held in Chico this May).

The plants are only made when the hatchery has enough fish in excess of the Feather River steelhead allotment of 450,000 fish, reported Feather River Hatchery Manager Anna Kastner.

The fish grow at a very fast rate, due to the great forage conditions available in the afterbay. 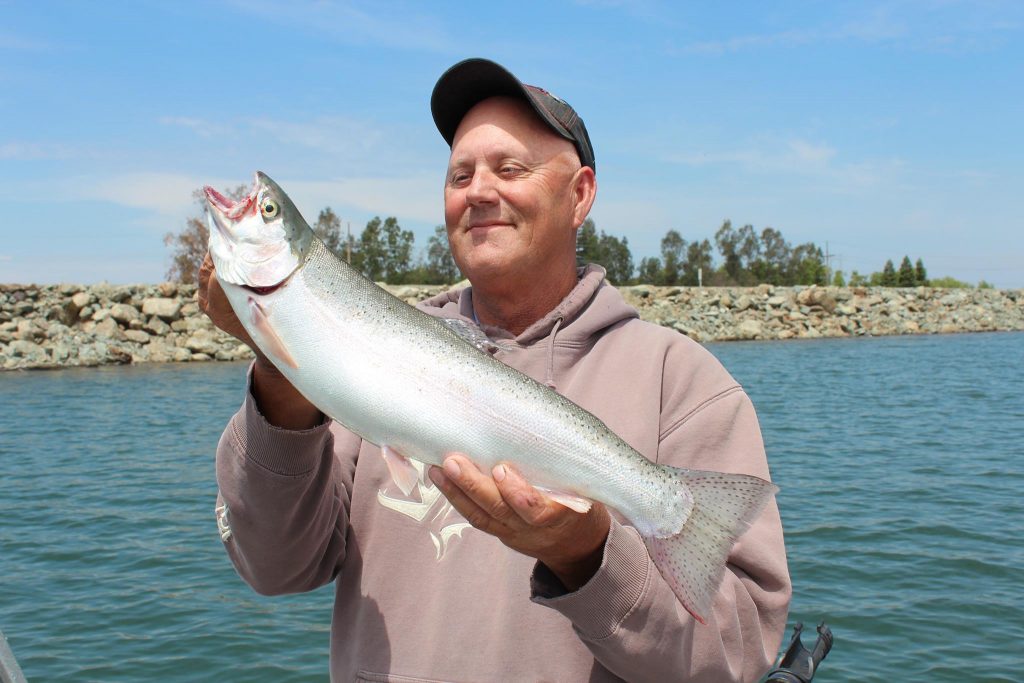 The fish that went in during my visit will take advantage of these insect hatches and grow to catchable sizes quickly.

Rowan said twenty to 24-inch fish are common later in the summer and fall. I can attest to this, since I caught two landlocked steelhead over 4-1/2 pounds while trolling nightcrawlers in the afterbay with Rob Reimers of Rustic Rob’s Guide Service in 2012 and again in 2015. Fish up to 12 pounds have been reported by anglers at the afterbay.

“It is really great to be able to provide an additional fishing opportunity for the community, especially one that is accessible to shore anglers,” said Kastner. “When the fishing is good, people will line up along the banks to catch these steelhead.”

While fishing will be best after the fish grow larger, the Feather River Hatchery has also stocked 303 hatchery steelhead kelts into the Thermalito Afterbay, providing an additional trophy fishing opportunity for shore and boat anglers.

The kelt program uses male hatchery steelhead that have returned from the ocean to the hatchery to spawn, according to Kastner. Their milt is first used to fertilize eggs at the hatchery for the next generation of steelhead. The fish are then reconditioned and put in the Afterbay for anglers to catch.

“There are concerns that putting hatchery-produced males back in the river after they have been spawned at the hatchery could allow certain family groups to be overrepresented if that fish spawns again in the wild, which could potentially lead to inbreeding. Moving kelts to the Afterbay solves that problem, with the added bonus of providing another fishery for anglers,” she added.

“We’ve always supported fish plants by the CDFW to enhance the fishery at Oroville and Thermalito,” said Popelreiter. “The steelhead fishery adds an extra layer of recreational opportunity besides the sunfish and black bass warm water fishery. It is clear that this water also supports a quality cold water fishery. Anything that DWR can do to improve recreation on the Lake Oroville complex is greatly appreciated.”

Some anglers have already caught some of the big steelhead kelts. Crawshaw said one angler earlier this year showed her a 10-pound steelhead on his stringer, along with two smaller fish, that he landed while shore fishing at the afterbay.

For bank fishing, Crawshaw recommended fishing in the Monument Hill area ioff the rip rap and rocks.
“All along the afterbay, there are wells to help pump the water table down so it doesn’t flood Highway 99. This movement of water stirs up the food,” she said.

She recommended using nightcrawlers and Mepps spinners for the fish.

Trollers find the best success while trolling nightcrawlers behind flashers and dodgers in the main channel where the cold water flows through, as I’ve done with Rob Reimers of Rustic Rob’s Guide Service several times.

Resident warm water fish species in the afterbay include largemouth bass, bluegill, green sunfish, channel catfish, and black crappie. Since there are numerous tules and weed beds, anglers find success while flipping with jigs and Senkos and tossing out spinnerbaits and swimbaits for the largemouths.

The Thermalito Afterbay is part of the Department of Water Resources’ massive Oroville-Thermalito Complex. The afterbay sits 2 miles (3.2 km) south-west of the tail end of the Thermalito Forebay, with only a 9,100-foot-long (2,800 m) canal connecting them. The Afterbay provides storage for the water required by the pumpback operation to Lake Oroville, helps regulate the power system, produces controlled flow in the Feather River downstream from the Oroville-Thermalito facilities, and provides recreation to the area. It also serves as a warming basin for agricultural water delivery to the numerous rice and grain fields just west of the Afterbay.

Thermalito Afterbay Dam, at 42,000 feet-long, is the longest crest in the California State Water Project system. Construction on the Afterbay began in 1965 and was completed in 1968.

Besides the afterbay, there are abundant salmon, steelhead, striped bass and shad fishing opportunities in the nearby Feather River in the Oroville area, along with Lake Oroville’s prized spotted bass, landlocked salmon, channel catfish and sunfish populations.

Location and description: The Afterbay is part of the Department of Water Resources’ massive Oroville-Thermalito Complex. The afterbay sits 2 miles south-west of the tail end of the Thermalito Forebay, with only a 9,100-foot-long) canal connecting them.

Season: Fishing in the afterbay is open year-round. Warm water fish species (largemouth bass, bluegill, green sunfish, channel catfish, and black crappie) can be found in the Thermalito Afterbay, in addition to the landlocked steelhead. Salmon, steelhead, shad, and striped bass can be found in the near Feather River.