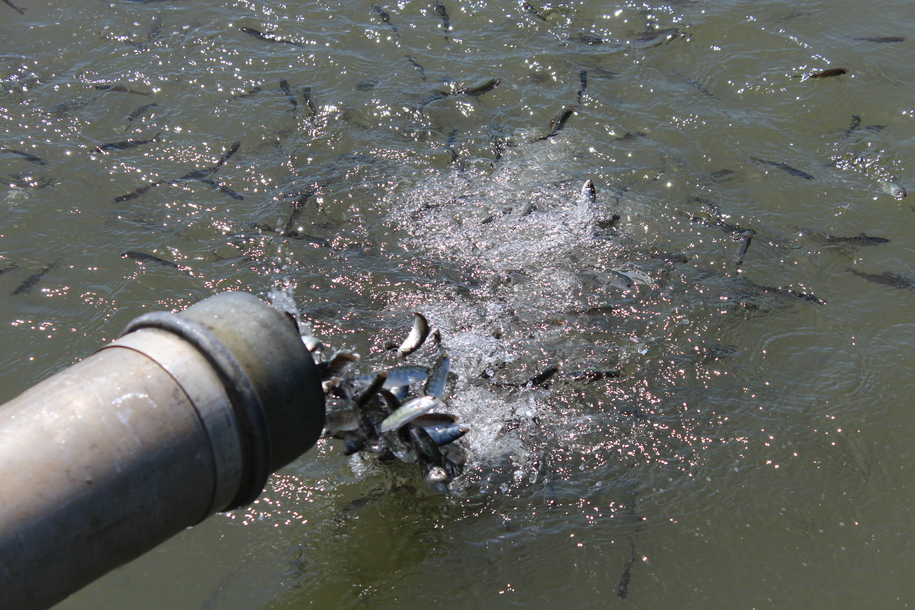 CDFW staff from the Feather River Fish Hatchery in Oroville hooked up a long metal pipe extending from each truck to the end of the boat dock to allow the fish to get into the current away from the eddy near the ramp. The silvery fish plummeted into the water on their long journey down the river, through the Delta and Suisun Bay, through San Pablo Bay and to the ocean outside of the Golden Gate.

“We’ve released 100,000 salmon this way at the Elkhorn ramp once before during a study,” said Jay Rowan, Senior Environmental Scientist Supervisor-Hatcheries, CDFW North Central Region. “We found out the survival of the  fish was really good and comparable to 100,000 fish taken down river in a barge and 100,000 fish released into the bay.”

The release is the result of months of discussions and meetings between the Northern California Guides and Sportsmen’s Association (NCGASA) and state officials. The association successfully negotiated a deal with the California Department of Water Resources (DWR) for it to pay the Department of Fish and Wildlife (DFW) to raise two-million hatchery salmon.

James Stone, the president of NCGASA, sees this as the first step to make up for the thousands of salmon killed in the aftermath of the partial collapse of the State Water Project’s Oroville Dam Flood Control Spillway Outlet, in February 2017. The disaster had forced nearly 200,000 residents of Butte, Yuba and Sutter counties to evacuate their homes on an hour’s notice, due to a feared collapse of the dam’s auxiliary spillway.

“Last month, 1,000,000 million of the 2,000,000 salmon were trucked from the Feather River hatchery and released into the San Pablo Bay. CDFW personnel said the delay in releasing the second batch of baby salmon was that they were too small to place code wire-tracking tags (CWT) in their heads,” he said.

Stone noted that an Independent Forensic Report attributed the spillway collapse to the DWR’s failure to properly construct, maintain, and operate the publicly-funded Oroville Dam flood control facilities, resulting in the discharge of tons of sand, gravel and other debris into the Feather River.

“The discharge of this material destroyed ‘critically listed salmon spawning habitat,’” said Stone. “More importantly, after the partial collapse of the spillway, DWR personnel deviated from the prescribed water releases from the Dam. Extreme fluctuations in river flow reached 100,000 cubic feet per second down to no water releases at all; causing upstream migrating salmon to be stranded and die on dry land before they could spawn and deposit their eggs.”

He also said many of the natural spawning fish fry died because of the massive amount of sediment flowing downstream. The turbidity rose to extreme levels, killing many young salmon and steelhead.

The Association had asked for a 20,000 cubic feet per second pulse flow on the Feather River for five days to allow the fish get down river quickly, safe from predators and away from the fish-killing state and federal pumping facilities. However, DWR said they couldn’t provide the pulse flows because they were trying to conserve water during a year with a light snowpack.

“DWR attempts to synchronize flow increases for project purposes with hatchery releases, but this is not always possible,” said Erin Mellon, public information officer to the California Department of Water Resources. “Although a pulse for a hatchery release in early March was a success, it was not possible this week because Lake Oroville is currently being operated to conserve water in light of the low snowpack with low water content.”

“As a result CDFW decided the best adaptive approach for this week would be to move the release downstream. DWR paid for the production and tagging of these fish, which are additional to normal production levels. CDFW believes they are being released in a spot that should have good recruitment to the ocean fisheries,” noted Mellon.

Bob Boucke, Northern California Guides and Sportsmen’s Association Board Member, and other Board Members at the boat ramp today said they were thankful that DWR paid for the extra salmon to be raised and released, but were disappointed that they weren’t able to provide water for the pulse flows.

“It’s all about money,” said Boucke. “We, the fishermen, do not have the money that the big farmers have to pay for the water.”

Because DWR wouldn’t provide a pulse flow on the Feather, CDFW made the decision to release these fish in the mainstem Sacramento River where flows are higher and better for survival, John McManus, Executive Director of the Golden Gate Salmon Association pointed out.

“Survival is almost certain to be better because of this decision, but straying of these fish, when they return in two years as adults, is also likely to be higher than if they were released in the Feather,” stated McManus. “This will hurt the economies of Oroville, Yuba City and Marysville that all benefit from strong salmon returns to the Feather River.  DWR could have chosen a different response that would have helped those communities and the survival of this group of salmon but chose not to.”

Stone noted that government officials recently restricted commercial and recreational fishing for salmon, due to declining populations. The recreational ocean salmon season has been cut by approximately one third, while the commercial ocean salmon season has been cut by about half this year. While anglers on the Sacramento, Feather and American rivers will enjoy a full season this year, the daily bag limit has been cut from two to only one fish.

“Billions-of-dollars of taxpayer funds have been spent in a failed attempt to double salmon populations, which are lower now than ever,” emphasized Stone.

The Central Valley Project Improvement Act of 1992 requires the doubling of all natural spawning anadromous fish populations, including Sacramento River Chinook salmon, Central Valley steelhead, white sturgeon, green sturgeon, striped bass and American shad, by 2002. Unfortunately, instead of doubling, salmon and many other species have continued to decline, due to massive water exports from the Delta, mismanaged upstream dam and reservoir operations and other factors.