Fishing in my local area is in a transitional period right now (in other words: not worth the time), but I was itching to get some water time in.
My buddy Bret and I made plans earlier in the week to give Bucks Lake a whirl. This would be our second trip of the year to Bucks. Given that I’d already scored my Devil Fish here a month before in the form of a 34.25 inch mackinaw, my main goal on this trip was to nab some kokanee for the grill and have some light-tackle fun with the macks or whatever else wanted to bite.
I left Chester around 0415 and met Bret at our launch spot at 0530. Soon enough, we were pushing off the shore right before the sun crept over the hills. 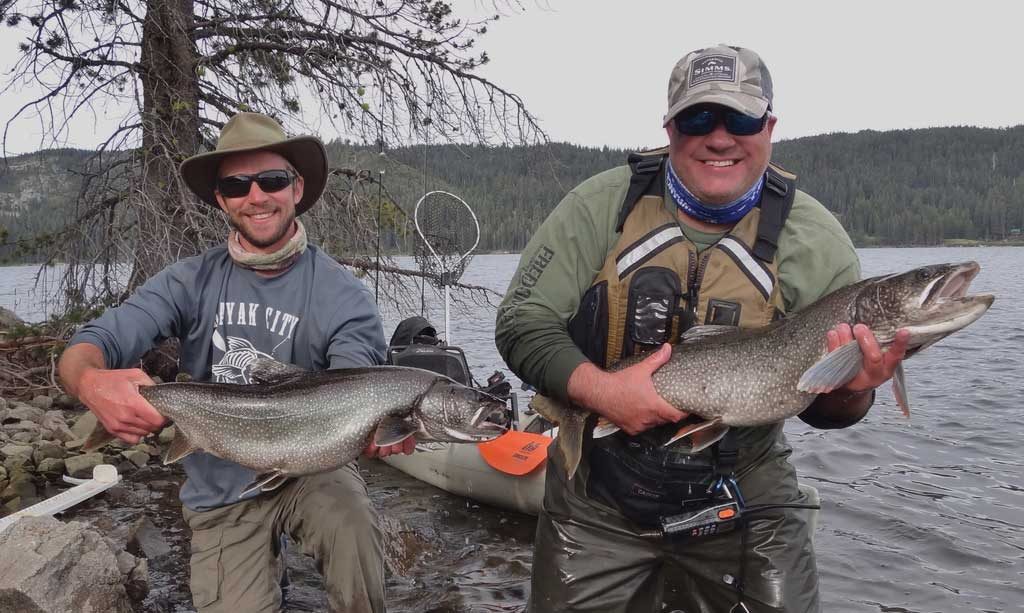 The weather forecast called for 8-13mph winds with gusts to 20. We hoped the morning would provide a few hours of calmness. The lake looked ominous as soon as we launched, with those weird “random gusts of wind from every direction” rippling the surface. But we were here, and we were fine with playing with whatever cards we were dealt.
Within 100 yards of the launch, I marked a school of kokanee on the depth finder. Dropped my jig on them, had some bites, but no hookups.
After that, Bret and I parted ways, with me in search of ‘koke schools and Bret looking for his Devil Fish. With eyes glued to my depth finder screen, I angled towards a favorite rock pile of mine that has produced mackinaw in past trips. As soon as I hit the transition from gentle 70 foot bottom to the 55 foot deep boulder cluster, I spied a nice mark hovering 5 feet off the rocks.
Thinking this was a smaller mack (Bucks is loaded with 12-18 inch macks), I dropped the exact same rig that I’d used last month right onto his nose. I watched the mark move up another five feet and as soon as my falling jig and the mark intercepted, my line went slack. Swing, set, fish on!
At first he came up kinda easy for about 15 feet, then all of a sudden he woke up and tore off on a screaming run all the way back to the bottom. Oh boy, here we go again!
After the initial screaming run, the fish settled into the same groove as my previous large mack. He bulldogged straight beneath the kayak, occasionally coming up 10-15 feet before plowing his way back into his comfort zone below 40 feet. Once again, the hookup came on 6 pound fluoro on a light-action rod, so all I could really do was hang on and wait for him to tire out.
Forty minutes in, and the fish started headshaking. Although they were the same big, violent headshakes as my previous mack, I wasn’t quite as terrified by them this time around, probably because I was already expecting them. 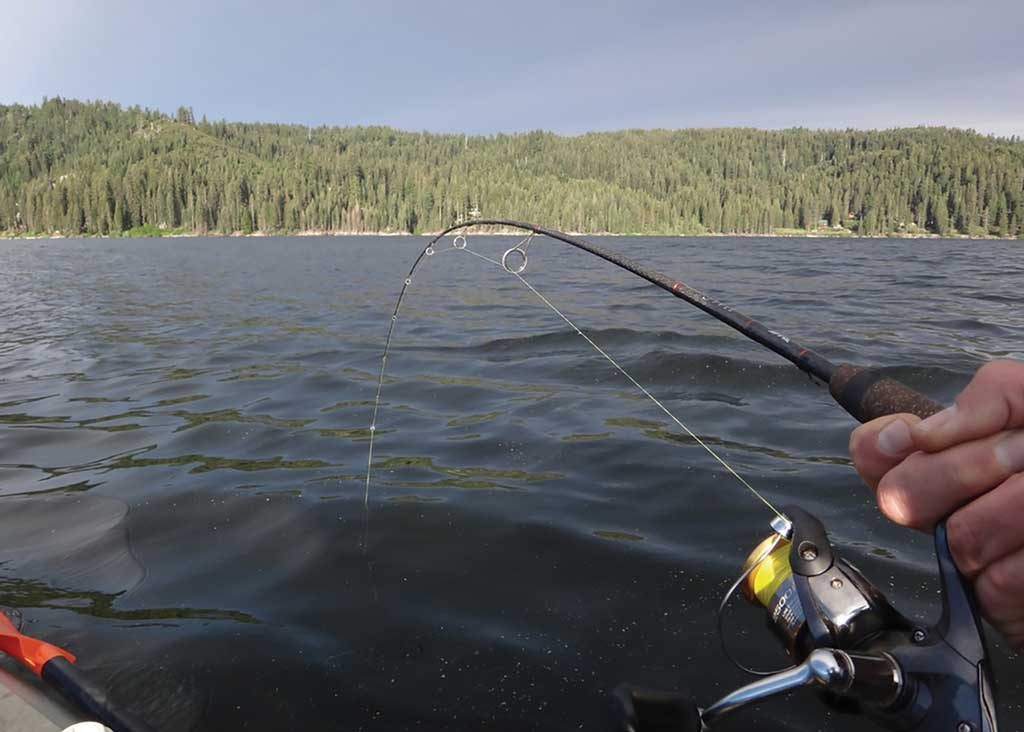 The violent headshakes were still unnerving, but I welcomed them because it meant the fish was growing tired. A few minutes later, I was able to work him above 40 feet, got color at 10 feet, and pulled off a smooth lip-gripper-landing with the jigging spoon hooked on the very tip of his lower jaw. My second 30 plus inch mack!
I radioed Bret to find where he was, since he’d disappeared from my view. He was on shore working with a fish for release. With the lip grippers in place, I placed my fish in the water and slowly trolled him towards Bret’s landing to keep oxygen running through his gills.
Once I reached Bret, an old college buddy of mine showed up in his 12 foot aluminum to say hi. It was good to see him, and it was also a great opportunity for a few photos of our back-to-back macks!
After the photos, it didn’t take long to work my fish back to health and I watch him lumber back towards the depths.
The wind started kicking up borderline-whitecaps at this point, and we were thinking this would spell the end of our day. But every time the wind would sustain itself from one direction just long enough to create chop, it’d peter out and start blowing from a different direction. It felt like the wind blew from every direction possible for at least 20-30 minutes at a time, but it was never enough to kick us off the lake. So we stuck it out and picked up a few more macks in the 16-18 inch class.
Around 1300, I finally stuck my first kokanee after dropping jigs on several schools and missing the bites. No wonder I was missing them: they’re running small this year, a far cry from the 12-13 inchers we were catching at the same time last year.
The afternoon bite was pretty slow. Bret and I spent most of it scouring the open water for ‘koke schools. We came across several schools, but due to their small size, they were difficult to hook with jigs. But it was tough to complain. 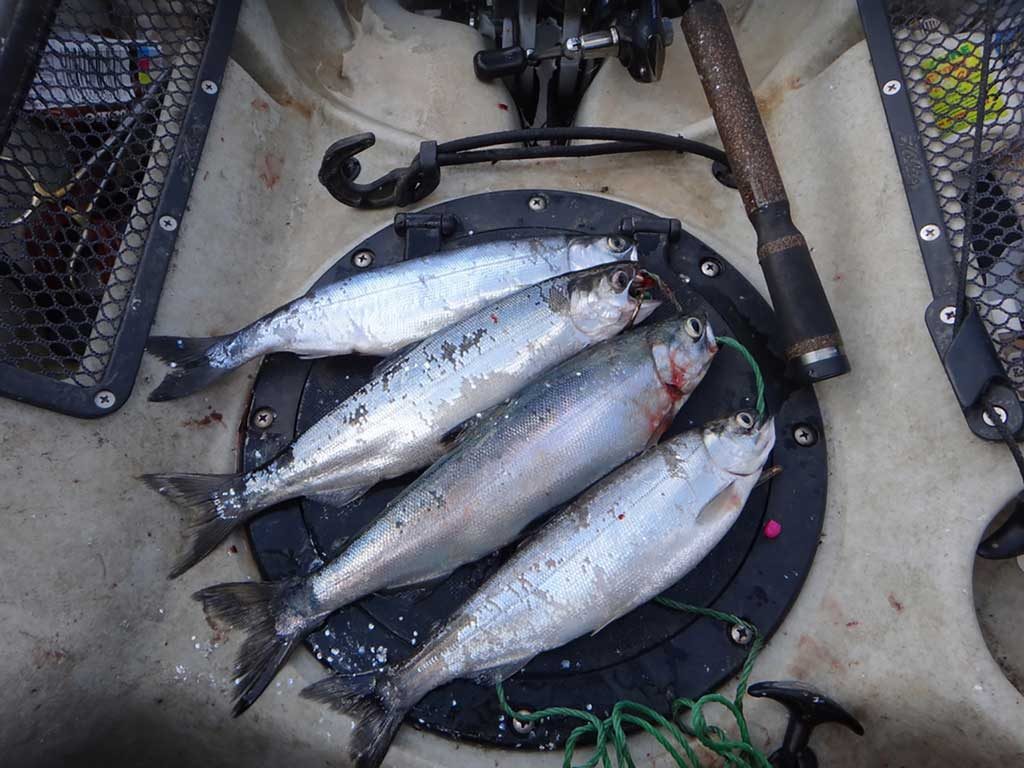 Bret took off around 1530 or so, but I stuck it out for a bit longer, intent on bringing home some kokanee. It paid off!
I found a large school in open water, hanging at 40 feet, that for some reason decided to stick around in one spot for a few minutes. I used this opportunity to increase my bag to 4 ‘kokes before the school departed.
Bucks Lake is poised to open soon. Bucks is a bit of a mystery for a lot of folks. We’ve received multiple requests to run this Chris Mayes Bucks Lake feature again that first graced the pages of the Fish Sniffer two years ago. Since we are kicking off a new kayak fishing column in the print edition of the Fish Sniffer this week, this seems like a great time to run kayak fishing guru, Chris Mayes’s article once again. We look forward to publishing more Chris Mayes articles in the near future-Cal Kellogg.