Lake Amador, located on Jackson Creek in the Mother Lode near Ione, lived up to its reputation as one of Northern California’s premier trout destinations during the NorCal trout Anglers Challenge held there on Saturday, April 28.
A total of 190 participants, including 150 adults and 40 youth, found solid fishing while enjoying beautiful spring weather during the popular event at the 400-acre reservoir.
“This event was a great way to end our winter-spring trout fishing season, and we look forward to our season ending event in October at Lake Pardee,” said Vince Harris, President of Angler’s Press Outdoors, the sponsor of the event along with the Fish Sniffer magazine. 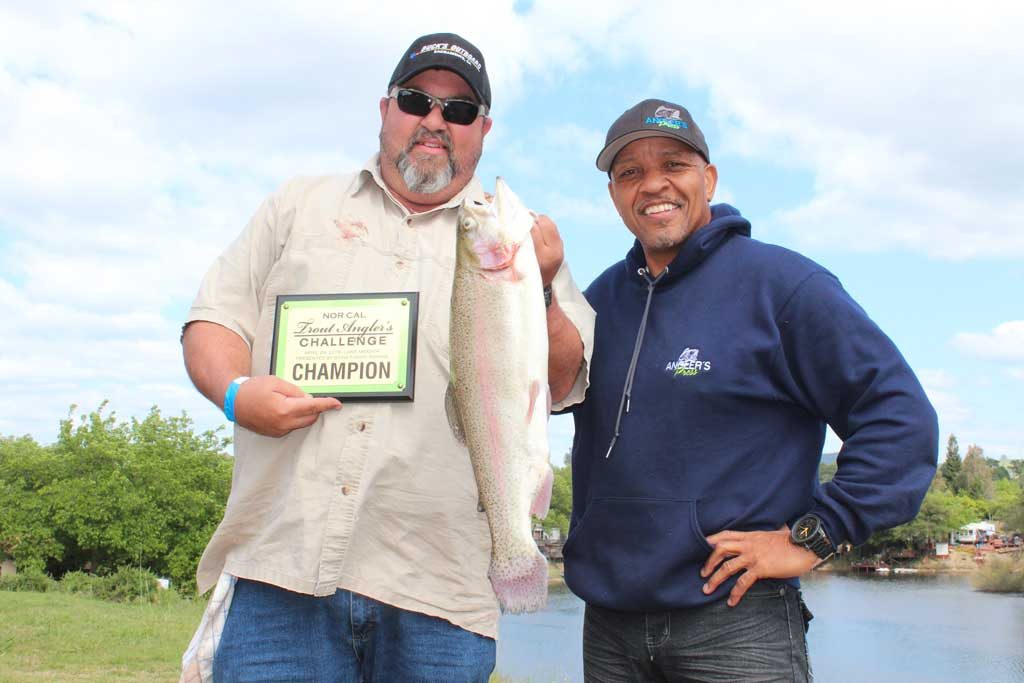 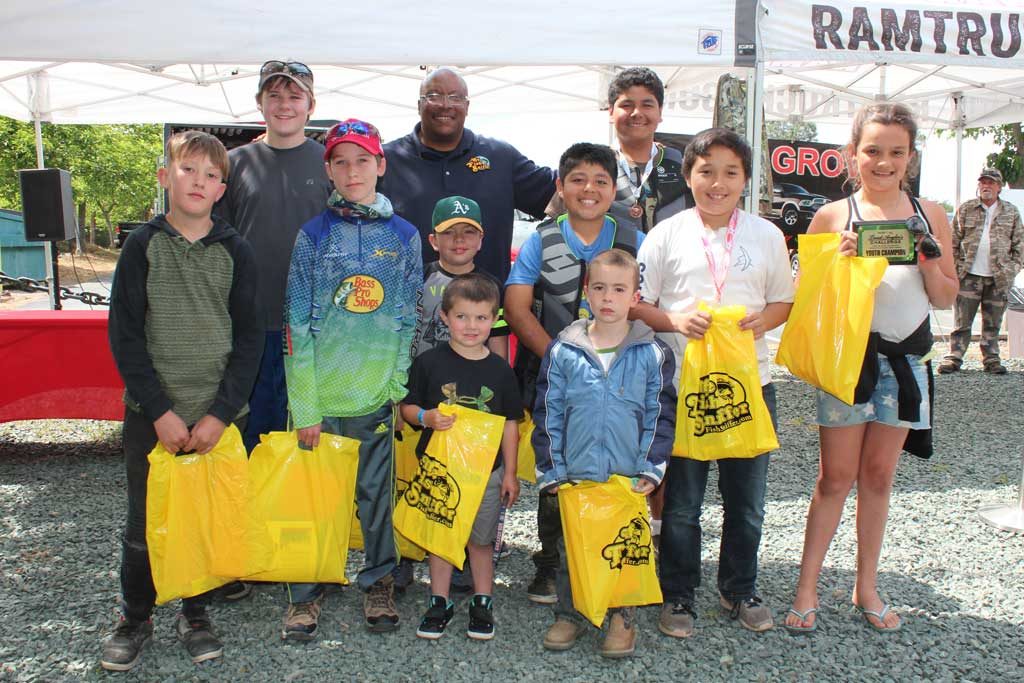 Erica Flores won the RoosterTail award for the day, decided in a drawing of those who purchased RoosterTail spinners.
For more information about the NorCal Trout Angler’s Challenge, call 916-768-0938 or go to: http://www.anglerspress.com/
The productive action was a result of the Lake Amador Resort’s ambitious trout stocking program, a fixture at the recreation area for decades. The resort is the only facility that I know of that has its own fish hatchery operation, an operation begun by Bob Lockhart over 25 years ago.
However, the lake management was forced to shut down the hatchery during the drought starting in 2018, the result of lack of water to keep the facility going. With better water conditions, the resort reopened the hatchery in 2017.
Amador produced one of the most memorable trout adventures that I have ever experienced. On a morning in June 1991, I went to the lake to catch some bluegill, since the tasty sunfish were on the bite the day before during a shore fishing trip I made to the lake in the afternoon. Fishing under a bobber off the docks below the lake clubhouse, I didn’t hook any bluegill, even though fishing buddy Doug MacPherson and I had experienced topnotch bluegill fishing the day before.
However, I did get into an epic trout bite. I caught one 3-1/2 to 4 lb. rainbow after another on light spinning gear, releasing some and keeping my limit of five fish. The limit weighed just shy of 18 pounds, a great weight for five fish anywhere in northern of Central California.
The resort has planted approximately 37,000 pounds of trout since this season’s trout plants began in October, according to Lee Lockhart, the grandson of Bob.
Around 6,000 pounds of the fish were from the newly reopened Lake Amador fish hatchery, closed during the drought, and the rest were fish from the Mount Lassen Fish Hatchery, including 1400 pounds of the unique, yellow-hued hybrid rainbow trout that are always exciting for anglers to catch. 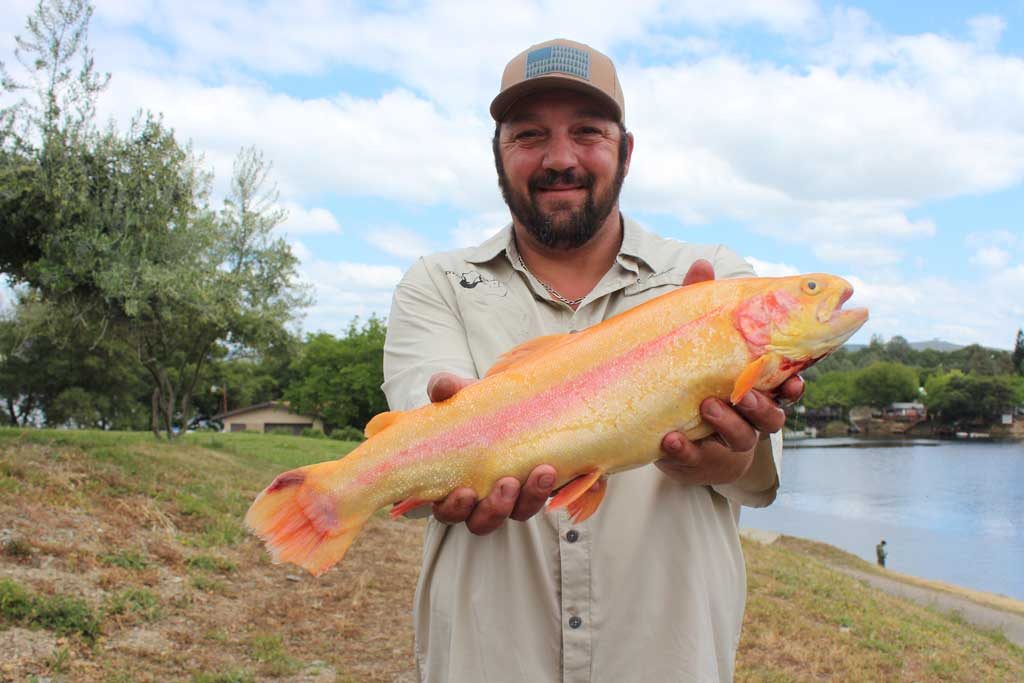 The hatchery is holding some Lighting trout – 100 fish – in the hatchery until the season begins next year to be planted in the fall because the fish are normally not available until the spring, said Lockhart.
Right now, the ponds are full with 1 to 1-1/2 pound trout. The ponds include approximately 5,000 Donaldson trout and 10,000 to 12,000 cuttbows, rainbow/cutthroat hybrids, from Utah.
They have also bought a batch of 38,000 trout eggs that are currently incubating at facility. The alevin (eyed eggs) feed off the remaining yolk that is attached to their body for 14-30 days.
“In addition, we are holding back some trout to be planting as large trophy fish,” said Lockhart.
The hard fight that Amador’s own hatchery raised trout have historically provided anglers, along with their beautiful fins and colors, are due to the unique strains of fish grown here and the conditions they are raised in.
First, the hatchery raises the fish in tanks 5 to 6 feet deep, rather than 18 inches deep like other hatcheries, making for better growing conditions.
Second, when the fish reach the age of 8 months and are taken out of the raceways, they are raised in 7 octagonal tanks with a constant current running through them. Swimming in the current forces the fish to become strong and healthy.
Third, the resort uses top quality “EWOS” food to raise their fish. Since it includes krill and sardines, it helped give the fish’s flesh their unique pinkish orange color.
Fourth, the lake management keeps the amount of fish in the hatchery at a lower density than the state and other hatcheries, so the fish display squared, rather than rounded, tails.
Fifth, the quality of the fish they raised also has to do the unique strains of fish they raise. While they first spawned fish from brood stock, they began buying eggs because it was less expensive.
“We raised kick-ass fish that fought like hell,” said Lockhart. “However, because costs to raise fish have tripled, we aren’t going to be able to raise 100,000 fish per year like we used to.”
Trout provide the most popular fishery at Amador from October through May, but the lake also features excellent populations of Florida-strain largemouth bass, channel and blue catfish, black crappie, redear sunfish and bluegill.
The largemouth found in Amador are Florida strain/northern hybrids. Northern strain bass were planted in the lake after it was filled in 1968, followed by the introduction of Florida-strain largemouth by the CDFW in 1973.
The lake management also plans to plant channel catfish this spring and summer, like they did over the past two years, to supplement the lake’s catfish population.
Over the years, Amador has produced some huge fish. The lake record bass, caught in 1986 by Tim Kamura, weighed 17.1 lbs. The record catfish, caught by Joel Issac, weighed 39.6 lbs. The record crappie weighed 4.1 lbs., while the record trout weighed 16.4 lbs
For more information, contact: Lake Amador Resort at 209-274-4739, www.lakeamador.com. 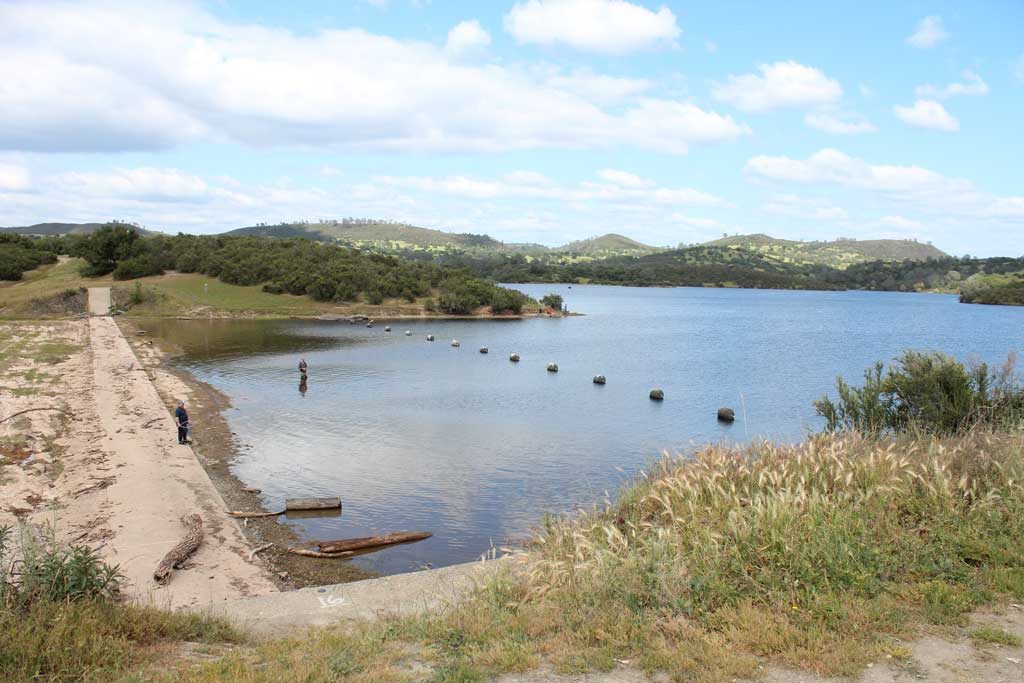