The landlocked king salmon fishery at Oroville has been a popular and exciting fishery at Lake Oroville since 2013, but the fishing took a back seat last year to the unfolding of events at Oroville Dam that resulted in the evacuation of nearly 200,000 residents of Butte, Yuba and Sutter counties on a one hour notice when Department of Water Resources and local law enforcement officials announced that a failure of the auxiliary spillway was imminent after the spillway began eroding.

The giant hole caused by erosion in the primary spillway and then the erosion and damage to the emergency spillway that spurred the evacuation, followed by the release of 100,000 cfs down the primary spillway, also created the need for two rescue operations of salmon and steelhead by the California Department of Fish and Wildlife (CDFW) and the California Department of Water Resources (DWR).

Since then, the shabby construction of the spillways that resulted in the evacuation, the failure of state and federal officials to heed the advice of environmental groups regarding safety concerns at the dam, the ensuing investigations and the ongoing construction at the dam has been a front-page topic of local, state, nation and international media since February of 2018. 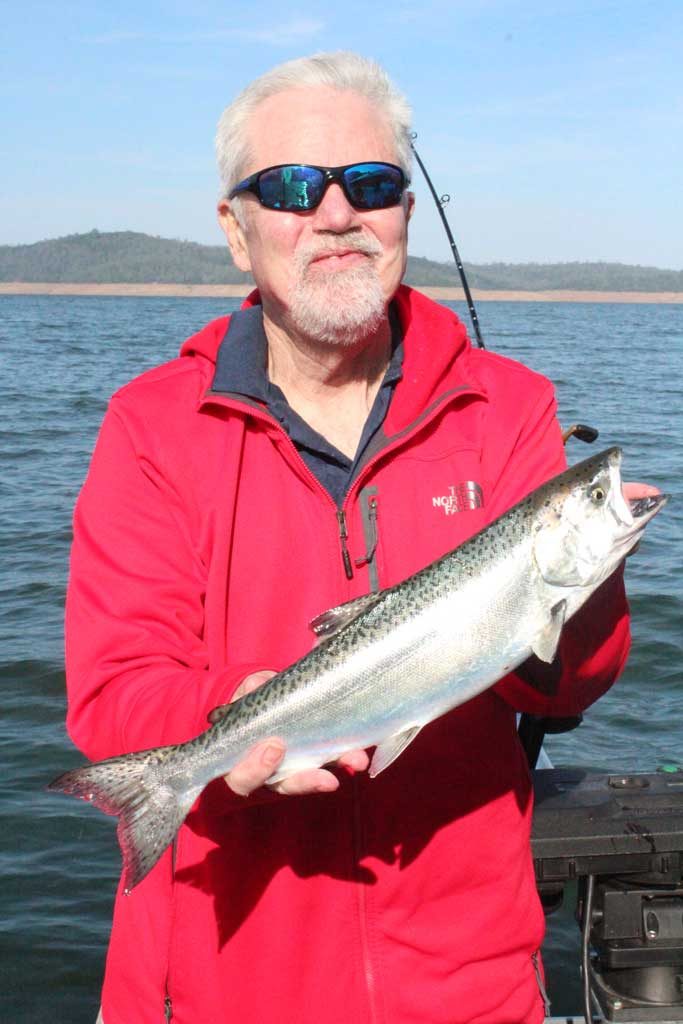 Dan Bacher, Fish Sniffer Editor, shows off a scrappy king that he caught on a trolling adventure at Lake Oroville with Captain Rob Reimers. Photo by ROB REIMERS, Live Oak.

The good news is that the Chinook salmon fishery is back in force this spring as construction activities continue at the dam. Anglers can no longer launch at the spillway, but boat launching is in full swing at the Bidwell Canyon launch ramp, as I found when I fished with Rob Reimers of Rustic Rob’s Guide Service on Saturday, May 19, on a beautiful and mild spring day.

Several days earlier, Reimers had done a scouting trip on the reservoir and caught 15 salmon in a couple of hours while trolling Brad’s Kokanee Cut Plugs behind dodgers, keeping five and releasing the other ten back into the lake. On this morning, trolling with us were Gary Adkins of Yuba City and Carrie Hodges of Loma Rica.

“On the last trip, we didn’t get any bites in the first 20 minutes and then the bite turned on,” said Reimers after he launched the boat at the ramp and headed towards the “green bridge,” the Bidwell Canyon Bridge.

Anna Kastener, manager at the CDFW’s Feather River Fish Hatchery in Oroville, said they stocked 25,000 salmon fingerlings in Oroville last May and then 110,000 chinooks in the 6 to 9-inch range in October. The facility also stocked 133,120 salmon in November 2016.

We didn’t get land any big holdovers, but we did get two surprise rainbow trout measuring 18 and 12 inches in the mix. We didn’t realize they were wild rainbows until we got back to the ramp and Rob noticed they were trout before cleaning them.

“It should be an excellent year at Oroville,” said Reimers. “I’ll be booking trips at Oroville and Bullards Bar until salmon season begins on July16.” 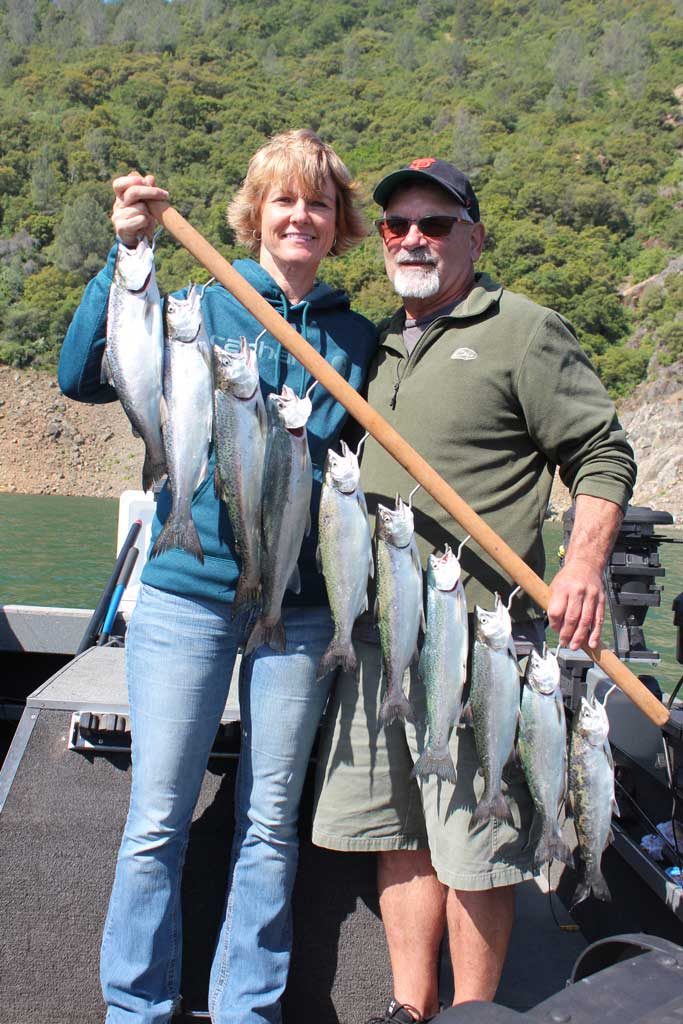 Carrie Hodges of Loma Rica and Gary Adkins of Yuba City show off a quality catch of landlocked king salmon and one rainbow trout taken while trolling with Rob Reimers of Rustic Rob’s Guide Service on Lake Oroville on May 18. Photo by DAN BACHER, Fish Sniffer Staff.

“On my latest trip, we landed around 30 fish by 9:30 a.m. while trolling at the green bridge and the east wall of the lake,” he stated. “The biggest were 17 to 18 inches long. We caught our fish while trolling at 25 to 35 feet deep with white and green hoochies, tipped with anchovy strips, behind dodgers with custom tap at 1.2 to 2.3 mph. We also lost two big holdovers.”

The Oroville trout and salmon stocking began in 1968 after the lake was filled and opened to the public – and has gone through many twists and turns over the years.
From 1986 to 1992, the CDFW with additional private stocking planted rainbow trout, brown trout, Chinook salmon, Coho salmon, brook trout and lake trout at various times over the years, according to a report from the California Department of Water Resources published in 2009.

From the 1980s until the early 1990s, there were fish disease and supply problems, so from 1993 to 2000 the CDFW and DWR oversaw the planting of Chinook salmon and brown trout in the lake.

The brown trout fishery in particular was prized by anglers, since the shore fishing with night crawlers and minnows under bobbers, as well as the trolling, was very good.
In 2000, the agencies made a recommendation for planting 170,000 Chinook salmon and 60,000 brown trout. However, a virus problem arose at the Feather River Hatchery, traced to Lake Oroville chinook stocking, and a stocking moratorium placed on Lake Oroville. 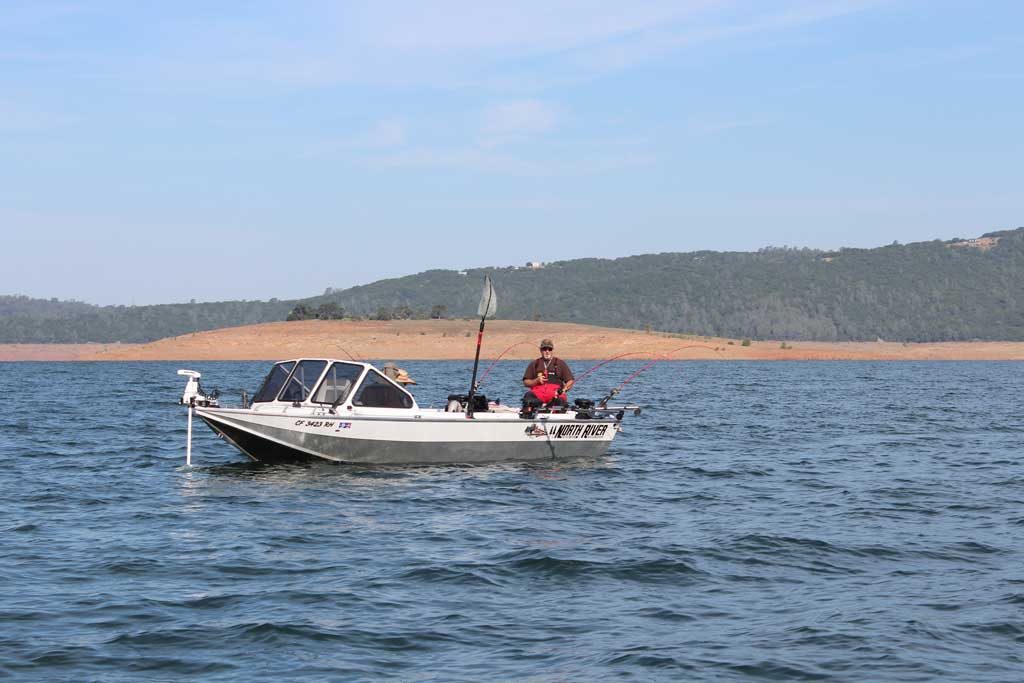 In addition, in 2001 CDFW/UCD IHN studies showed IHN disease resistance of 8 salmonid species: brown trout, kokanee salmon, lake trout, Coho salmon, Pit River strain rainbow trout, brook trout, Lahontan cutthroat and coastal cutthroat. There was significant mortality in all but Coho, so DFG decided that only Coho should be planted in the lake.

In 2002, eggs arrived from a commercial hatchery in Washington state (Aquaseed). Coho salmon were stocked in 2002 and 2003 – and they became very popular with anglers.

However, in 2004-05, there was a disease problem with Aquaseed broodstock (BKD) and CDFW fish pathologists provide guidance to Aquaseed on their broodstock management.

From 2006-09 to 2012, the stocking of Aquaseed Coho resumed, but it was discontinued after Department scientific staff shared their concern that continued use of Coho salmon would jeopardize future efforts to recovery the species in California.

“There were two primary concerns. First, that non-native stock in Oroville would escape the reservoir and pose a genetic contamination threat to native populations in California. Because the Sacramento River flows to San Francisco Bay, part of the range of the Endangered Central Coast ESU, this concern was significant. Though the recovery staff believed Coho salmon would escape, others in the Department were confident this would not occur,” said Rowan.

“Second, continued support for allowing the species occurrence outside its native range would prolong arguments and proposals to allow recovery to include planting of native Coho salmon as a strategic element of the State’s recovery,” said Rowan. 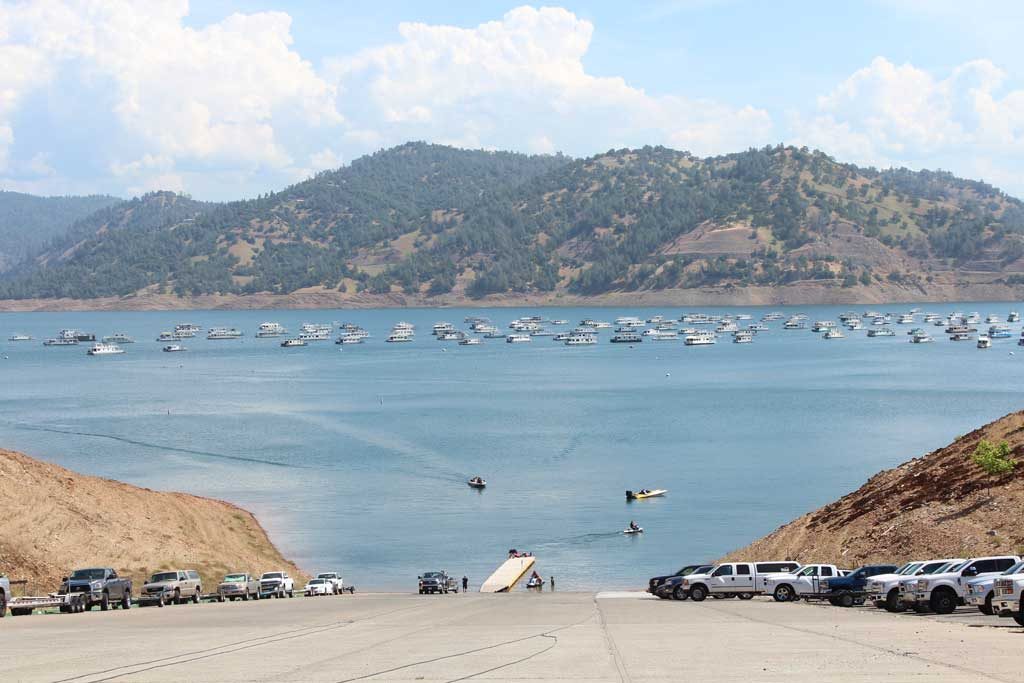 Closure Area: The area of Lake Oroville closest to the dam and extending into the main body of the lake (approximately 1,000 yards) is closed to boating. The closed area is delineated on the water by a series of buoys which read “Area Closed” and contain the State of California’s uniform marking that restricts access.

Location and Size: Near the City of Oroville this man-made lake was formed by the tallest earth-filled dam in the country at 900 feet at max capacity, 770 feet above the stream bed of the Feather River. When the Lake is at its maximum elevation, it includes some 15,500 surface acres for recreation and 167 miles of shoreline. Recreation areas are spotted around the Lake and boaters can land at any point to explore the surrounding country.

History: Lake Oroville was created by Oroville Dam, which the State Department of Water Resources completed in 1967 after 5 years of construction. Lake Oroville conserves water for distribution by the State Water Project to homes, farms, and industries in the San Francisco Bay area, the San Joaquin Valley and Southern California. The Oroville facilities of the project also serve to provide flood control and smog free generation of electric power in addition to recreation.

Lake Oroville Visitor Center: has a museum, exhibits, videos and a store. The view from the 47-foot tower, with two high-powered telescopes, is a spectacular panoramic view of the lake, Sierra Nevada, valley, foothills, and the Sutter Buttes mountain range (smallest in the world). For further information call the Visitor Center at (530) 538-2219.