The fishing didn’t start off as hot as it had when I’d visited Collins with Jason Graves and Andrea Kukulka a couple weeks before.
On this early May trip, Fish Sniffer webmaster Wes Ward was my partner. Wes was in his Hobie Outback kayak while I was in my Hobie Pro Angler 14.
We’d trolled all the way from the launch ramp, up to the dam and across the dam to the east corner without so much as a touch. Now we were trolling side by side, cutting across open water headed for the mouth of Elmer’s Cove.
“I don’t know what happened. I’m running the same gear I was running the other day and I killed them,” I said to Wes.
At that exact moment, my spoon got tagged hard and the Vance’s trolling rod bent double as leadcore line melted off the spool. I peeled away from Wes and a puff of breeze helped me spin around. I reeled hard and never lost contact with the trout. 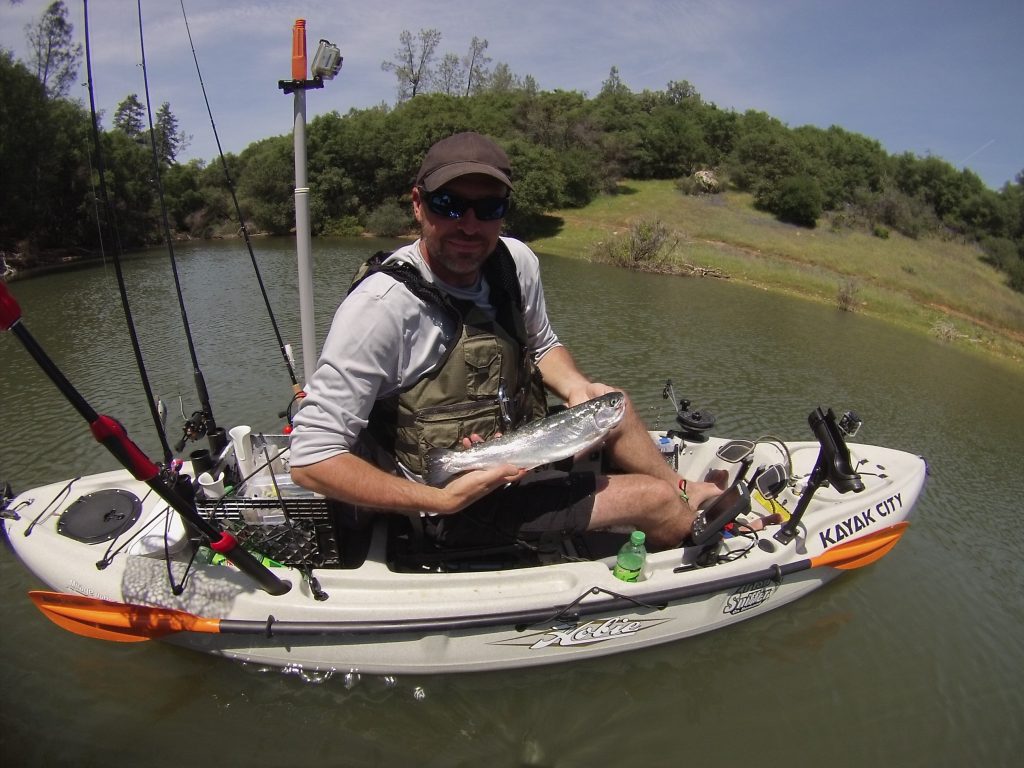 Wes was doing his best to catch me so he could shoot some video. The trout turned out to be a determined 2 pound rainbow that gave up just as Wes rejoined me.
“Dude, I don’t know what happened right there, but somehow I got tangled in your second line. I’ve big coils of your green Trilene everywhere,” Wes laughed.
After releasing the fat rainbow into my cooler, Wes and I figured out the tangle and we were soon on our way.
For another half hour or so, we made circles in the area where I’d hooked up. When no more action developed we made our way up into the narrows and made a pass under the power lines. Those power lines give up a lot of good trout, but not on this day. We had no bites and there wasn’t much action on our sonar units.
Heading back down the lake we intended to make a pass down the Swim Beach, but we never made it that far.
When Collins is high and spilling like it is right now, the peninsula that divides the far side of Elmer’s Cove from the rest of the lake turns into an island. Right at the end of that island we spotted something that looked odd. A ripple, a shine…? Maybe it was a bird diving or even a muskrat or something….?
“Bait…It’s bait. Those are shad, something has to be chasing them,” I exclaimed.
“I see them, I see them,” Wes repeated as he scrambled to tie on a shad pattern minnow plug.
I already had the lure I wanted on the end of my line, so I took the initiative and made a big looping 2.5 mph circle around the bait with a small Ex-Cel Spoon working about 8 feet deep….Nothing!
Doubt was flooding into my mind, when Wes hooked up right behind me and peeled off. I came around hard with the video camera running and learned that Wes had hooked a good size spotted bass.
After tossing the bass, we once again started circling the bait that was still breaking off the island. Wes landed and released another bass almost immediately and I had a husky rainbow actually run into the side of my kayak as it zeroed in on a terrified shad. I’m pretty sure the shad got eaten a nano-second before the trout ran headlong into my Hobie.
While the action off the island held up I caught a bass and a second trout, while Wes’s rod went dead.
When the shad action tapered off outside Elmer’s Cove we moved into the cove itself and found more bait breaking around a section of floating dock.
Wes hooked his personal best trolled rainbow when a hefty 3.5 pound slammed his plug on his first pass around the dock.
We high-fived in celebration of Wes’s big rainbow and then got back to trolling. By this time, I’d added a 6 inch green Sling Blade to my rig with the Ex-Cel trailing about 30 inches behind it.
I made a very close pass to the dock at just under 3 mph and the Sling Blade and spoon combo got crushed. I was certain I had a big rainbow like the one Wes had landed, but instead it was a big open water spotted bass that simply couldn’t lay off a shad pattern spoon zipping through the water!
Of course, we kept on grinding on the bait and we kept landing fish. Most of them were bass.
Early in the afternoon, we decided that we’d have to hit the road soon. We decided to go to the extreme rear of Elmer’s Cove to shoot some final scenes for the video we’d be putting together.
It looked pretty bassy in the back of the cove and Wes was fooling around with a wacky rigged worm, when I spotted shad blitz out of the water amid three distinct swirls. I knew exactly what to do.
With trembling fingers, I dug a small River2Sea walking bait out of my tackle kit and tied it onto a spinning rod armed with 20 pound braid.
I fired the lure out, started walking it and a bass immediately exploded on it. By the time, I landed and released that 2 pound spot Wes was at my side.
“Put on a popper,” I told him as a bass boiled on the walking bait and I had a second two pounder struggling on the end of my line.
Wes’s white popper got slammed almost as soon as it hit the water and so it went.
We’d get a few blow ups, the bait would move and we’d have to wait for the bite to develop again. I don’t know how many bass we ended catching. I do know it’s the only time I can recall leaving a topwater bite still in progress and heading home, but that’s what we had to do in order to beat the traffic!
Wes was in a bigger hurry than I was, so I stopped at the Collins Lake Store for a soda and a waffle cone packed full of yummy peanut butter cup ice cream…It had been another fantastic day at Collins Lake!