Fishing can be full of action at times other times a philosophical pursuit. I definitely experienced the latter Monday and Tuesday during two long afternoons on Santa Rosa’s Fountaingrove Lake.
Sunny early June skies and a breeze out of the southwest with a water surface temperature at seventy-seven degree hinted at a nice paddle.
The first day I was eager and anticipated a good bite. I expected lots of two pound bass with a decent number of bigger fish.
I armed myself with a Spro Bronzeye Frog tied to Powell Inferno rod balance with an Abu Garcia Orra Winch with fifty pound Power Pro braid. My second rig, a Powell Endurance 753 MEF Spinning rod and Daiwa Fuego reel strung with sixteen pound Sunline SX1 braid featured a wacky rigged five inch Yamamoto Senko. The Senko rod was sitting in the rod holders behind my seat.
Conditions were a little tough probably partially due to the bright June afternoon and mildly windy conditions. I heard a sound familiar from my childhood in the Sacramento Valley, the rhythmic thump and metallic clang of a freight train. 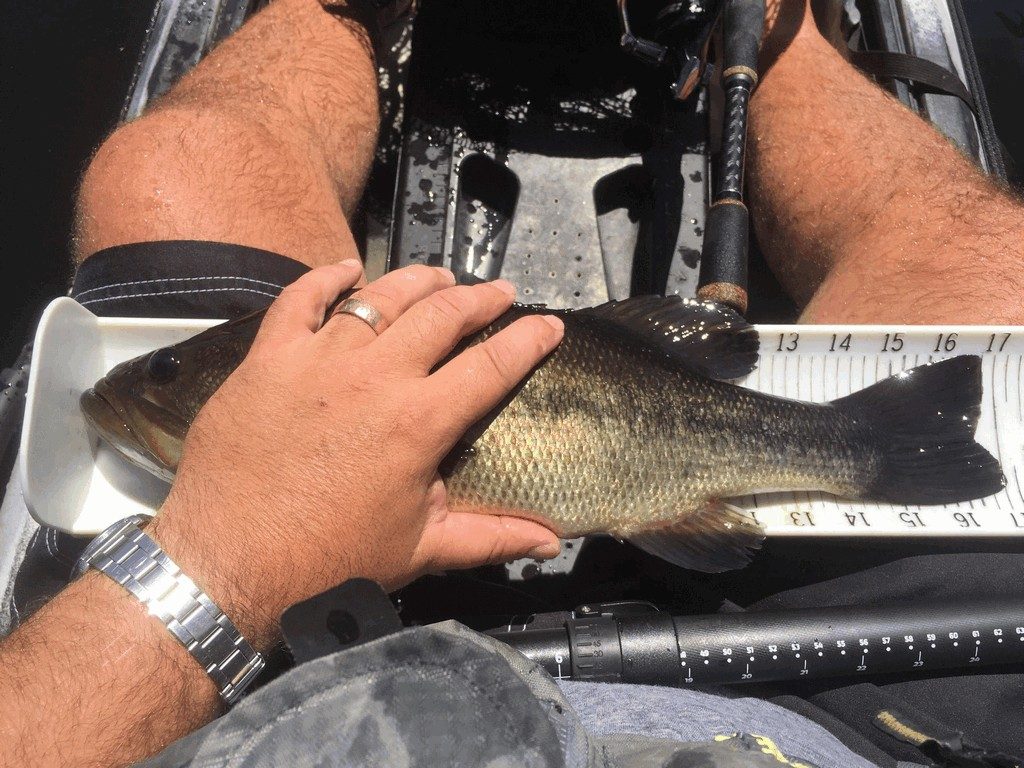 As I neared the northern end of the small reservoir the second factor making conditions tough came into view. It wasn’t a freight train or even the SMART train for that matter. It was a machine I was to learn was a Truxor DM5000 Amphibious tool carrier and aquatic vegetation removal machine. The huge machine was cutting and removing tules and duck weed. In the process, it was shaking and rattling most of the 33 acre reservoir!
Undaunted by these challenges I returned the next day to find the aquatic mower idle but the fishing still slow. The sunny skies were easy enough to deal with by wearing a hooded and long sleeve SPF 50 fishing sun shirt.
The wind was little problem due to the agile Ocean Kayak Trident 13 propelled effortlessly by my 33 ounce Adventure Technology Odyssey Angler paddle.
The lake itself sits in an upscale residential area and was largely in the path of the October 2017 Tubbs fire which burned over fifty-six hundred structures in and around Santa Rosa.
The shoreline and island show evidence of the fire and the wild environment like the human one is working on returning to normalcy. The charred trees are alive with the sounds of birds, otters swim and build dens in the densely growing shoreline weeds and tiny baitfish elude unseen predators.
Like those baitfish, the largemouth bass mostly eluded me those two days, I caught one fish each day, but I succeeded in reaching a state of happiness and calm on the water so near the bustling traffic and ever presented comments of my non-fishing life. Any day spent kayak fishing is a day well spent!

Fountaingrove Lake is a reservoir in the City of Santa Rosa. Formed by Fountaingrove Dam, the lake is fed by Piner Creek. The dam was constructed in 1953.
The lake offers a unique getaway for residents and anglers living in the Santa Rosa area. Gamefish species include largemouth bass, bluegill and channel cats. Bass fish for largemouths to 9 pounds is best during the spring, but kayakers find bass action all year long.