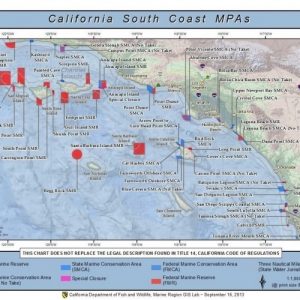 One of the big news stories neglected by the media is the capture of California politics and the regulatory apparatus by Big Oil and other corporate interests in recent years – and the massive expansion of offshore drilling that has occurred in state waters under the helm of Governor Jerry Brown as a consequence of this regulatory capture.

The enormous power that Big Oil exerts over California regulators was inadvertently revealed in a March 10, 2012 article in the Santa Barbara Independentthat discussed a so-called “marine protected area” created under the privately funded Marine Life Protection Act (MLPA) Initiative that went into effect on January 2 of that year.

The official language for the marine protected area in the Isla Vista area of Santa Barbara County, the Campus Point State Marine Conservation Area, reads, “Take of all living marine resources is prohibited, except for take pursuant to operation and maintenance of artificial structures inside the conservation area … ”

“The caveat, allowing marine resources to be taken near artificial structures, exists to allow oil production representatives the ability to maintain equipment, including pipelines, located in this area,” the article by Cat Heushul stated.

Unfortunately, the reporter failed to mention the even bigger story — that Catherine Reheis-Boyd, President of the Western States Petroleum Association, actually served as the Chair of the Marine Life Protection Act Initiative Blue Ribbon Task Force to create this “marine protected area” and others like it in Southern California: www.dfg.ca.gov/…

She also served on the task forces to create “marine protected areas” on the Central Coast, North Central Coast and North Coast. If that is not a huge, glaring conflict of interest, I do not know what is.

In yet another conflict of interest typical of California politics, Reheis-Boyd’s husband, James D. Boyd, first appointed by Governor Davis, sat on on the California Energy Commission from 2002 to 2012, including serving as Vice-Chair of the Commission from 2/2007 to 1/2012.

I realize that the oil industry needs to maintain its equipment near “artificial structures.” However,  I find it ironic and disturbing that anglers are prevented from fishing in this so-called “Yosemite of the Sea” and “underwater park” off Isla Vista while the oil industry is allowed to “take” living marine resources — in a so-called “marine protected area” created under the Marine Life Protection Act (MLPA) Initiative.

This failure of the state’s regulators to comprehensively protect the ocean from offshore drilling is  further exposed by the massive expansion of offshore drilling in Southern California waters that began the very year that the glorious “Yosemites of the Sea” went into effect.

In February 2017, an analysis of Department of Conservation data by the Fracktracker Alliance revealed that Governor Jerry Brown’s oil and gas regulators approved 238 new offshore oil wells in state waters under existing leases off Los Angeles and Ventura counties from 2012 to 2016, an increase of 17 percent. Roughly 171 of them were still active as of a year ago. To read the complete report, go to: www.fractracker.org/…

Of the 5460 state wells, 2028 are active; 1336 are production wells, while the rest are support wells like wastewater disposal and water flood/steam flood/observation, etc, according to Kyle Ferrar of the Fractracker Alliance. The 1429 federal offshore wells include 441 production wells.

This expansion of offshore drilling occurs within the context of the bigger picture of the expansion onshore drilling for oil and gas in California. A report published on May 22 by Oil Change International, in collaboration with California-based and national environmental justice and climate groups, reveals how California’s climate leadership requires a managed ramp-down of oil production. A review of state permitting records in the report “The Sky’s The Limit: California,” shows that more than 20,000 drilling permits have been issued during the Brown administration, including permits for 12,000 new wells.

Legislative efforts to protect California “marine protected areas” from offshore drilling have been countered by intense lobbying efforts by the oil industry.

In 2014, I called Zeke Grader, the long time executive director of the Pacific Coast Federation of Fishermen’s Associations who passed away in September 2015, about a bill sponsored by Senator Hannah Beth Jackson to protect a marine protected area, the Vandenberg State Marine Reserve, from oil drilling, due to loopholes in both the California Coastal Sanctuary Act and the Marine Life Protection Act Initiative.

Grader, who supported the bill, pointed out how the very need for the bill “highlights what a failure the MLPA Initiative was.”

“If these are true marine protected areas, then why are we allowing drilling and other insults to the ocean in them?” asked Grader. “The whole MLPA Initiative was a phony process that provided an opportunity for Big Green and government bureaucrats to write press releases claiming these were ‘protected areas’ when in reality the fishermen and Tribes got screwed. We should have bans on oil drilling in all of the marine protected areas.”

And guess who led the charge to defeat this bill and a similar bill to it, SB 788, sponsored by Senator Mike McGuire in 2015? Yes, the very same oil lobbyist, Reheis-Boyd, who oversaw the marine protection process on the South Coast led the opposition to both bills to protect “marine protected areas” from oil drilling.

State officials and MLPA Initiative advocates, including NRDC, the League of Conservation Voters and the Ocean Conservancy and other NGOs, continually hailed the MLPA Initiative process chaired by the WSPA president as “open, transparent and inclusive” when it was anything but.

In fact, the MLPA Initiative failed to protect the ocean from fracking, offshore oil drilling, pollution, military testing and all human impacts on the ocean other than sustainable fishing and gathering. Meanwhile, the oil industry fracked federal ocean waters off the Southern California coast at least 203 times over a 20 year period, according to an Associated Press investigation in 2013.

The positive news is that two bills to block the Trump administration’s plans to open new federal offshore drilling leases off the California Coast, Senate 834 and Assembly Bill 1775, passed off the Senate and Assembly floors last week.

This legislation is specifically designed to counter the threat to the marine ecosystem posed by the Trump plan to open up new federal offshore drilling leases, although it could also help efforts by environmentalists, Tribes and fishermen to stop new offshore offshore drilling in state and federal waters under existing leases.

“The passage of these bills will provide political leverage to begin to address the dangers of new development associated with currently existing leases in both state and federal waters off the coast of California — but it is narrowly and explicitly designed to address the immediate offshore drilling expansion threat from the Trump-Zinke plan,” said Gary Hughes of Friends of the Earth US. “This is a step worth celebrating as an important step to protect our oceans, and we need to keep working hard to challenge extreme fossil fuel energy extraction and processing in California.”

For more information, go to: www.dailykos.com/…

In spite of California’s “green” image, the state is the third largest oil producer in the nation, right behind North Dakota (second) and Texas (first).  Big Oil, Big Ag and other corporate interests have captured the state’s regulatory apparatus by effectively buying off the regulators by spending many millions of dollars on lobbying every year and campaign contributions every election season.

During the 2015-2016 Legislative Session, the oil industry spent a historic $36.1 million to lobby California lawmakers and officials. During the last 6 years, the industry has spent $122 million in Sacramento, more than any other interest group.

Big Oil also dominated three out of the four top spots of expenditures by all lobbying organizations in 2017, the year that the oil industry-written AB 398 passed through the Legislature and Jackson’s bill blocking new federal offshore drilling went into the suspense file.

Outspending all of their competition, Chevron placed first with $8.2 million and the Western States Petroleum Association (WSPA) placed second with $6.2 million. Tesoro Refining and Marketing Company finished fourth with $3.2 million.

That’s a total of $17.6 million dumped into lobbying by the three top oil industry lobbying organizations alone. That figure exceeds the $14,577,314 expended by all 16 oil lobby organizations in 2016.

WSPA and Big Oil use their money and power in 6 ways: through (1) lobbying; (2) campaign spending; (3) getting appointed to positions on and influencing regulatory panels; (4) creating Astroturf groups: (5) working in collaboration with media; and (6) donating to nonprofit organizations, including environmental NGOs.

It’s crucial that we work hard to get Big Oil money out of California politics and make California’s faux “marine protected areas” into real ones that actually protect the ocean, as the Marine Life Protection Act of 1999 mandates. For more information, go to: www.dailykos.com/…