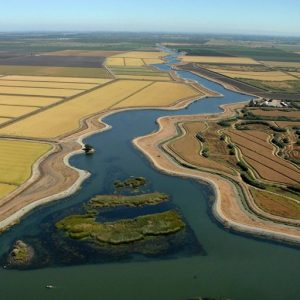 On June 20, the Municipal Water District of Orange County (MWDOC) Board of Directors unanimously approved a resolution to support Representatives Ken Calvert’s rider that bars judicial review of the Delta Tunnels.

MWDOC is a member agency of the powerful Metropolitan Water District (MWD) of Southern California, one of the biggest proponents of the tunnels.

Martha Camacho-Rodriguez, an educator/organizer with Social Eco Education, an ally with Restore the Delta, Sierra Club and Food Water Watch, spoke against the resolution at the board meeting and a Public Affairs & Legislation Committee on June 18.

“California ratepayers who are now aware this entire agency’s connection to Congressman Ken Calvert — who is  renowned for political corruption – is well documented,” Camacho-Rodriguez said. “Your board is behind the push for Calvert’s rider to strip the people of California the right to judicial review of the WaterFix tunnels. This political push by this corrupt agency shows your disregard for constitutional protections for Californians. It is immoral, corrupt and low down dirty to conduct yourselves as two-bit crooks.”

“Your board member Brett Barbre pushed MWD board members with political wheeling and dealing to support this corruption. The political maneuvering and Brown Act Violations are all documented in communications between Brett Barbe and MWD’s Jeff Kightlinger. This is corrupt!” she said.

Documents from a recent California Public Records Act request by Food and Water Watch and the First Amendment Foundation reveal that Barbre was the driving force on the Metropolitan Water District of Southern California’s Board of Directors for enlisting Governor Brown’s help in moving forward with the California WaterFix.

The committee also stated their support of another rider that was added to the Interior spending bill written by Representative David Valadao (R-Hanford) that would exempt the Central Valley Project and State Water Project from judicial review. MWDOC’s General Manager Robert Hunter claimed that Congressman Calvert, a close political advocate for MWDOC, would not have supported the Valadao rider if it couldn’t pass.

“The real question now is if Governor Jerry Brown, and the California Department of Water Resources will speak out against Calvert’s Federal rider,” said Barbara Barrigan-Parrilla, Executive Director of Restore the Delta. “ For years, the Governor and DWR have promised the public that CA WaterFix is an environmentally beneficial project that would comply with state and federal environmental laws. If so, why are they silent on this rider?

“Furthermore, it is not lost on the people of the Delta that Governor Brown, leader of the opposition to the Trump Administration’s dismantling of environmental and social justice policies, is letting anti-environmental House Republicans from California like Congressman Calvert, Congressman Valadao and House Majority Leader Kevin McCarthy push forward legislation that would gut environmental protections for the San Francisco Bay-Delta estuary,” she concluded.

Bob Wright, Senior Attorney at Friends of the River, explains the implications of Calvert’s rider that the MWDOC board now supports.

“Supporters of the CA WaterFix claim that the project will be good for the environment and improve the San Francisco Bay-Delta,” said Wright. “If that were true, there wouldn’t be a legislative effort to undo legal review of this controversial project. The hypocrisy of the Interior committee’s actions shows that this project was not crafted to benefit the environment or the public, but to benefit a margin of our country’s financial and powerful elite.”

The Next Step to Stop the Calvert Rider? Get Governor Brown and the Department of Water Resources to Stand Up for Due Process

Your calls, tweets, and emails encouraged Senator Feinstein and Senator Harris to voice their opposition to the Interior spending bill rider that seeks to end our legal fight to protect the Delta from the CA WaterFix debacle.

Now its time to ask the father of the tunnels, Governor Jerry Brown, what he supports more—his pet project, or the preservation of the rule of law, the right to representation, and due process.

When contacting the Governor, please remember to be respectful. In this instance, we are more likely to be heard when speak from a calm, collected place of concern, rather than a place of hatred and contempt.

An example of a call or email to Governor Brown’s office might look like this:
“Hello, my name is ________, and I live in _____, CA. I am calling today to express my disappointment that Governor Brown has remained silent about the Interior spending bill rider that seeks to ban all litigation on the CA WaterFix project. Congressman Calvert’s rider in addition to Representative Valadao’s rider that would exempt litigation for the State Water Project and Central Valley Project are flagrant attempts to undo due process and proper representation for Delta communities.

Why is California’s “Green Governor” capitulating with anti-environmental House republicans to secure a project that he claims will improve conditions for fish, restore the Delta, and help the state sustain water supplies as the impacts of climate change intensify? Moreover, if Governor Brown champions himself as an ethically conscious leader motivated by social justice, why are environmental justice communities in the Delta not given the same consideration?

I urge the Governor to stand up against these destructive riders and to prioritize the rule of law and due process over his tunnels project. Thank you for your time and consideration.”