Caples Lake, an El Dorado Irrigation District (EID) managed reservoir in Alpine County, is one of my favorite lakes to fish in the Sierra Nevada because of both its majestic alpine scenery and fine trout fishing. The lake currently hosts brown, rainbow, brook and mackinaw trout, although rainbows are the most populous species.

Caples features 620 surface acres and is situated at approximately 7,820 feet above sea level when the lake is full. It is located off Highway 88, the Carson Pass Highway, about 17 miles south of Lake Tahoe. 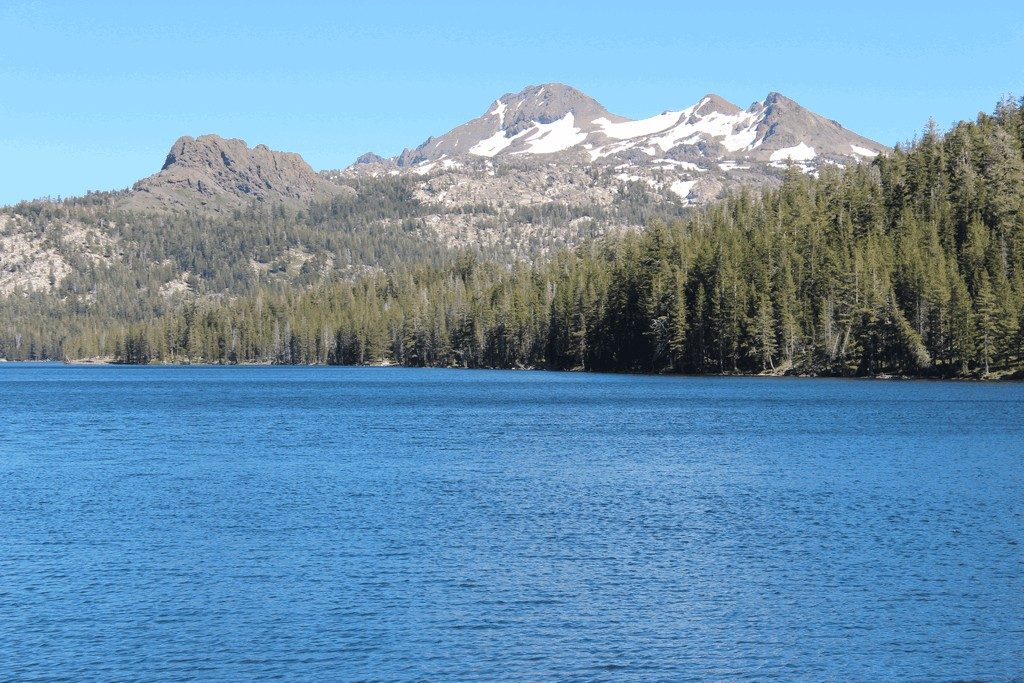 My latest trip to the lake on June 20 shows why I like fishing at Caples so much. I didn’t see many people fishing on the lake – just a few at the spillway when I arrived there at 4:30 p.m.

I drove to the dam where I have a spot that almost always produces fish. I set up a Power Bait rod and then started casting another rod with a 2/5 ounce Little Cleo. Within a short time, I had battled five scrappy trout, keeping three rainbows for the table.

What was even better was that since I was there late in the day, I was the only fishing that area. I didn’t see any other anglers as far as I could see, other than a couple of guys trolling for several minutes near my fishing spot.

After fishing, I went over to the Caples Lake Resort to talk to Joe Voss, the son of long-time owner of resort owner John Voss, who passed away in 2016.

One of the last times I visited with John was when I caught a limit of holdover brown, brook and rainbow trout while fishing from shore nearly a decade ago.

The CDFW planted 2,000 pounds of rainbows at the lake in late May 2018 – and great fishing for the rainbows, along with holdover rainbows and a few browns and mackinaws, ensued.

“The fishing has excellent this season since we opened in May,” said Voss. “There are a fair number of rainbows out there from the CDFW trout plant this May and from a previous plant in the fall of 2017”

On the day I fished, Mary Lou Rossetto landed a 4-pound German brown. She an and her husband, Tony, also landed two rainbow trout in the 13-inch range, all three while soaking PowerBait from their boat.

“Her fish is the biggest brown I’ve see caught to date on the lake since May – the largest previous one weighed 3-1/2 pounds,” said Voss.

Big browns and mackinaw lurk in the clear, pristine waters of Caples. The lake mackinaw record is 26 pounds and 39 inches held by Norm Perini from Pine Grove. Jeff Walters from Kirkwood holds the brown trout record at 13 pounds and 31 inches. 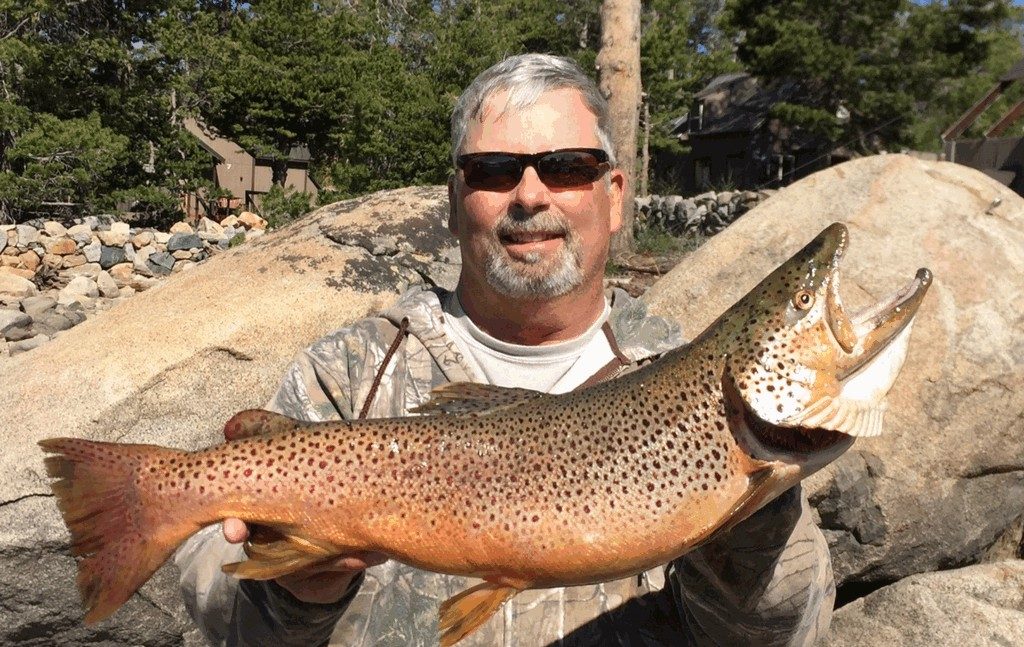 Voss advises anglers in pursuit of rainbows to top-line troll with flashers and worms throughout the season. For browns, he urges boaters troll with Kastmasters, Speedy Shiners and stickbaits including Rapalas early in the spring and late in fall before the lake ices over.

Shore anglers find solid trout action at the dam, spillway and Woods Creek inlet and other areas on the lake while tossing out PowerBait, Power Eggs, crawlers and an array of Kastmasters, Rooster Tails, Panther Martin spinners, Little Cleos, Thomas Buoyant spoons and other lures.

I have fished Caples numerous times from the bank since 1999 and have done very well on a mixture of rainbow, rainbow and brook trout.

“Currently only rainbows and browns are being stocked in Caples by CDFW and EID. Along with current and past CDFW stocking, Caples currently supports populations of non-game fish such as Lahontan redsides (Richardsonius egregius) and tui chub (Gila bicolor). There is also a self-sustaining lake trout sport fishery,” said Ewing.

Woods Creek and Emigrant Creek are the main sources of inflow to Caples. Caples drains into Caples Creek, which flows into the South Fork American River.

In order to assess the fishery, CDFW installed three angler survey boxes (ASBs) at Caples. One box was installed just below the lake’s spillway, one at the E.I.D public 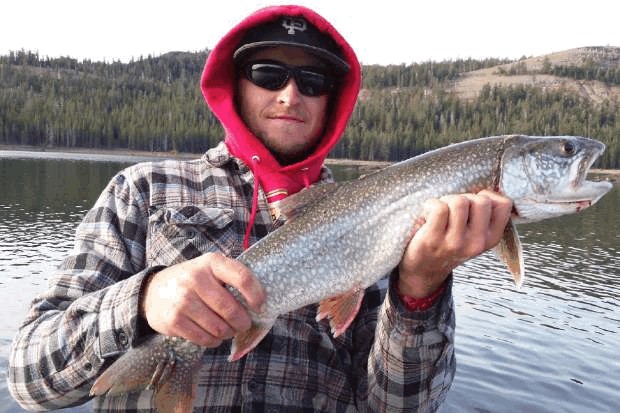 “Anglers reported using bait, lures, and flies while fishing at Caples. Five anglers (6%) used flies and had a 3.0 catch/angler average in 2016. This was the highest identifiable gear used to take fish in 2016. In 2015, the one fly angler caught no fish, which had the lowest catch per angler as well,” said Ewing.

Data gathered from the Caples Lake surveys indicates anglers had caught less than one fish on average per day in 2015 (0.72), but in 2016 catch per angler increased to almost two fish per day (1.97).

“The increase in catch rate and total fish caught may be due to the high number of fingerling-size RT stocked in 2014 and 2015, which have grown to catchable size. The number of respondents in 2016 was 78, an increase from 67 in 2015,” said Ewing.

Historically, the Washoe Indian Tribe from Carson Valley would hunt, fish and forage in the summer around Caples Lake, originally known as Twin Lakes because the original meadows had two shallow lakes, approximately six feet deep. 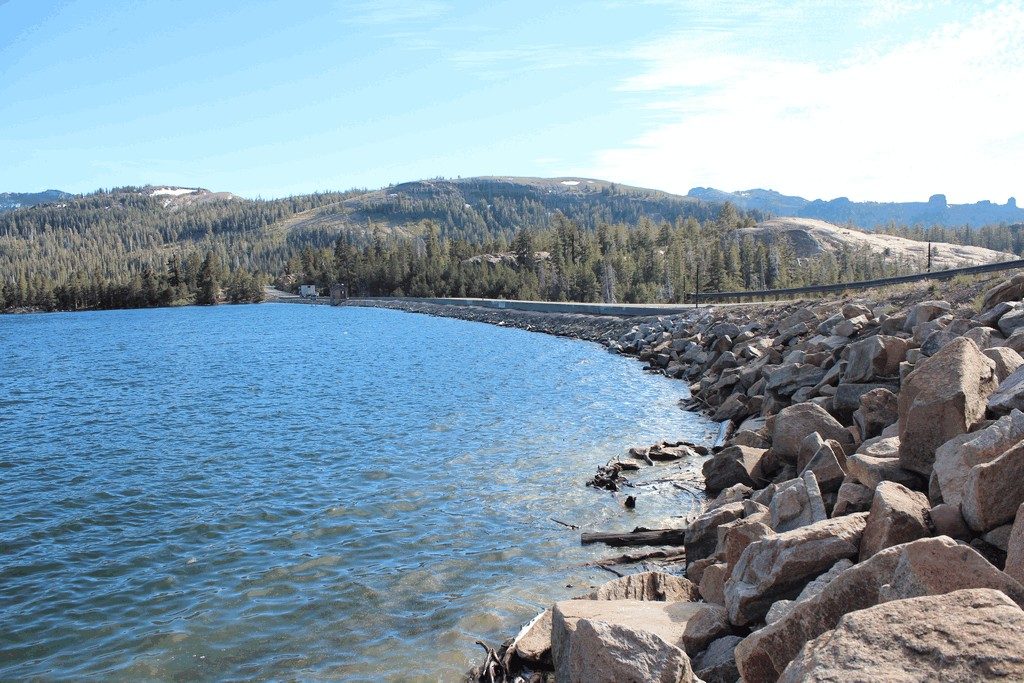 The dam on the Northwest side and the spillway on the West side of the lake were constructed in 1922 and raised in 1952.

In 1982 John Voss bought the resort and in the El Niño winter of 1983 endured 800 inches of snow blowing through the walls, windows, doors and roofs, frozen pipes, broken well, burnt up power lines, blown up lodge heater, and so on. In the summer of 1983 the lake thawed on a record late July 2nd.

The Voss’s have kept the resort open every winter since 1982 except for closing in the winter of 1991 due to the drought years.

Location: Caples Lake Resort Is located in the historic Carson Pass Area of the Northern California Sierra on the north shoreline of the 600 acre Caples Lake at 7806′ elevation. It is 1 mile east of the Kirkwood Mountain Resort, at 1111 California State Highway 88. The resort is 30 miles from South Lake Tahoe, California, within the El Dorado National Forest, under a USFS Special Use Permit.

Season: The resort is are from Memorial Day through October and from Christmas until April. Fishing is open year round for rainbow, brook, brown and mackinaw trout. Caples Lake usually freezes over by early December and becomes a playground for ice fishermen, cross country skiers, and snowshoe trekkers

Wildflowers: The volcanic ridges left behind as the glaciers receded from the Carson Pass area form a perfect habitat for wild flowers. In addition, because plant environments range from scree to open pasture and from seep to bog, a variety of species flourish. Peak bloom here is usually in mid-July, with flowers so dense and so various that a walk, even a short, easy one, can take the better part of a day. Bring your camera!