I winced as a blasting downdraft ruffled my straw hat and blew over a bag of chips. Two boats trying to troll on my port side looked like crabs slinking sideways across the lake surface. Their downrigger booms and rods extended in every direction were like tangled crab legs, but were of no use in keeping their vessels straight.
My wife Gina asked, “Are they supposed to cut in front of us like that?” My answer was that in wind gusts over 20 miles per hour, the rules of the road go out the window. We had to focus on the ability to avoid collisions. Even this seemingly simple task became difficult at times. Fishing became secondary in the gales of June at Whiskeytown.
Whiskeytown Lake is usually a beautiful place to fish, featuring a healthy population of some of the biggest kokanee in the state. It’s nestled amongst green plunging hills about 8 miles west of the town of Redding, California. Whiskeytown features some interesting landmarks, including a barrel-lined cold water curtain, and a high voltage power pole on its own custom island. The towering steel structure stands guard of the Whiskey Creek arm of the cobalt-colored lake. 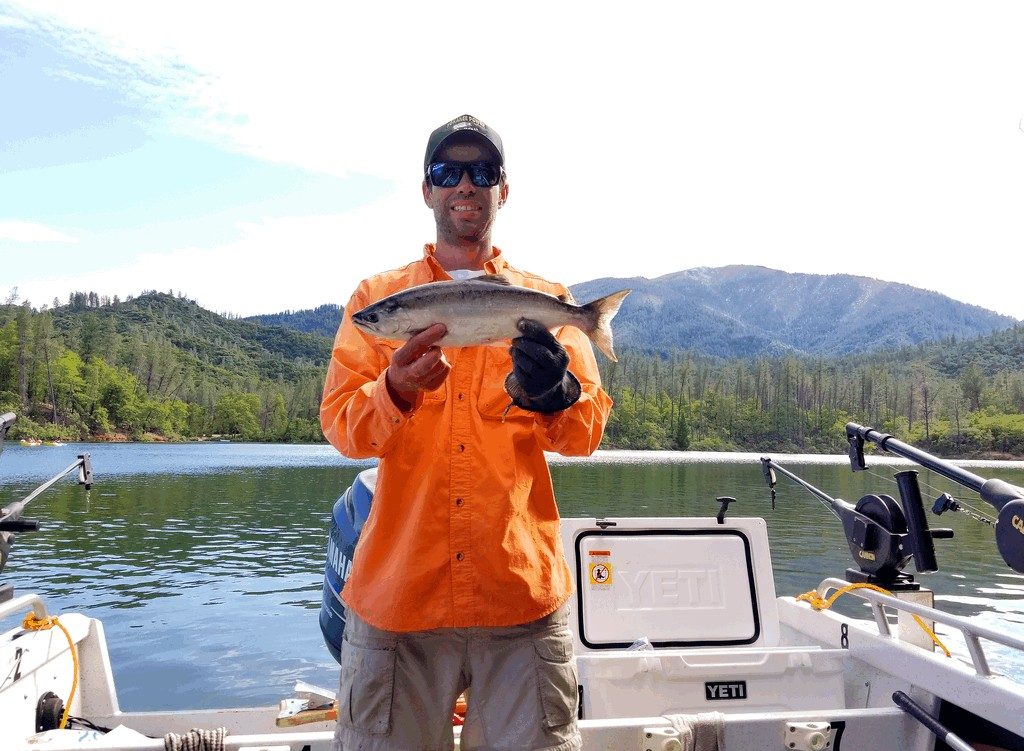 The 2018 Kokanee Power derby at Whiskeytown Lake was a two day event this year. The first day of the derby, Saturday, featured atypical winds to say the least. The menacing gusts were the worst winds I’ve ever tried to fish in using downriggers. Despite these challenges, my wife and I plus our two children were able to catch 14 kokanee on the first day of the derby. We even got two beautiful fish over 16 inches.
After being tossed around all day by the churning waters, it was a huge relief to be back on solid ground. We had a waterfront site at the Oak Bottom campground. It was a walk-in site, which meant packing and boating all of our gear to the site. However, once we made camp it was a convenient and beautiful location. The kids enjoyed observing families of baby mallard ducks and Canada geese frolic by the waterside campsite.
After weighing in our fish and returning to camp, we proceeded to the Kokanee Power dinner and raffle at the Red Lion Hotel in Redding. It was great dinner, and provided a nice outlet for everybody to complain about the wind. Kokanee Power President Gary Coe joked about how everybody was still rocking in their seats at the dinner. Gina enjoyed a glass of red wine, while I stuck with water for rehydration purposes. We still had another full day of fishing ahead of us.
At 5:30 am the next morning, we had our lines in the water at the Whiskey Creek arm of the lake. After the first day, we were sitting in fourth place, so I didn’t really want to change anything. Although the weather was much nicer, the morning bite was slow compared to the previous day. The first half hour passed, and we hadn’t had as much as a bump on any of our rods.
It’s funny how you start to question what you are doing when the kokanee bite turns off. Kokanee salmon, much like their king salmon cousins in rivers, will inexplicably bite or not bite at any given time of the day. When they go on a cold streak, you start to wonder if you should change things up.
Should I change colors? Try a different speed? Am I fishing too shallow? Should we get out of here and try somewhere else? 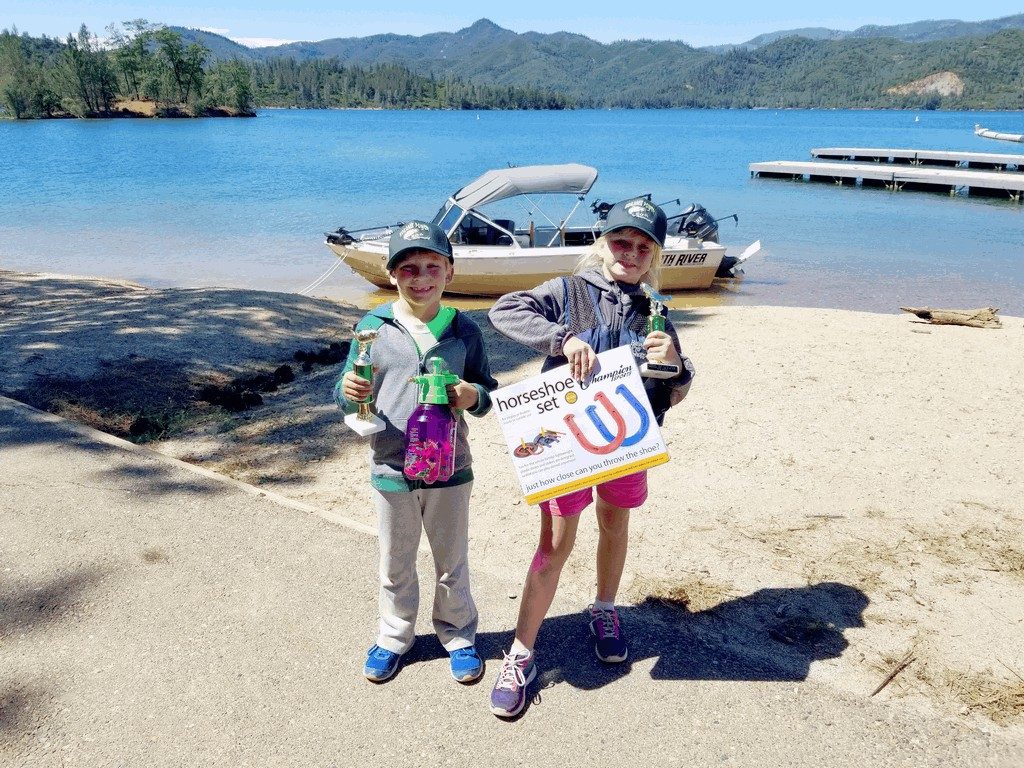 While questions like these danced in my head, I stood my ground and decided to stay put. I told Gina that the fish weren’t biting anywhere for anybody, as boats from across the lake raced over to our location. Those boats were moving because they were having the same slow action that we were suffering through.
The most frustrating part about kokanee fishing is trying to figure out what to do during dry spells. It’s wild how you will experience insane hot streaks followed by totally dead fishing for hours. You will drag your gear through school after school of kokanee without as much as a scratch. It will drive you nuts, but you have to persevere. Sooner or later they will start biting…but when?
As the sun crested over a tree lined peak, we picked up our first kokanee of the morning at 55 feet deep. Now we were in business. One by one, we continued to scratch out fish here and there. Although we never experienced a red-hot bite like we had on Saturday morning, we still managed to net 13 kokanee between the four of us.
The derby turnout was great, featuring over 100 adult entries. Back at the weigh-in, there was a door prize raffle followed by ceremonial trophy and prize presentations. Our kids Adam and Grace placed fourth and fifth in the junior division, while Gina and I took third in the team event. Ahead of us were the teams of Jim Brittain and Dale Gibbons in first place, and Gary and Cathi Durbin in second place.
Kokanee Power has more derbies lined up this summer, and I recommend attending any of their future events if you can. Information is listed on their website at www.kokaneepower.org