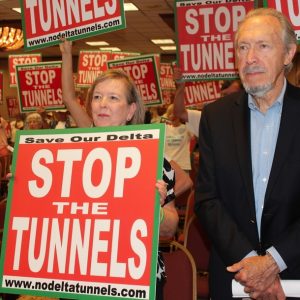 The California Department of Water Resources (DWR) on June 12 posted online a new document that details the environmental impact of proposed design changes purporting to minimize impacts felt by Delta communities and the ecosystem if Governor Jerry Brown’s Delta Tunnels project is built.

The project consists of two giant 35 mile long underground tunnels that would divert Sacramento River away from the San Francisco Bay Delta directly to South Delta state and federal pumping facilities in the South Delta. The construction of the tunnels would facilitate the export of massive quantities of Northern California water to Southern California water agencies and San Joaquin Valley agribusiness interests.

“The updated environmental analysis covers footprint changes resulting from proposed design modificationsthat further minimize impacts of the project on local communities and the environment,” the announcement from DWR claimed.

”This administrative review draft document is being distributed to responsible and cooperating agencies under CEQA and NEPA and is available on the California WaterFix website and for use by the State Water Resources Control Board as part of the ongoing California WaterFix Change in Point of Diversion hearings,” according to DWR.

During the coming months, the lead agencies will review the draft to determine if the document fulfills the requirements of CEQA and NEPA.

• Reduce impacts to salmon and smelt at the Clifton CourtForebay

• Reduce the number of power poles and lines required which improves aesthetics, reduces impacts to birds, and minimizes the need for power facilities near the town of Courtland, while also eliminating the need to relocate large 230 kV and 500 kV transmission lines.

Delta tunnels opponents countered that the design changes in the administrative draft supplemental EIR will “not save the Delta,” in spite of the claims of California WaterFix proponents.

“Many of these design changes may appear great on paper, but in reality, they will not save the Delta as long as Metropolitan Water District of Southern California maintains their ‘right’ to increase the magnitude of Delta water they take during dry periods,” said Barbara Barrigan-Parrilla, Executive Director of Restore the Delta (RTDP.

“Decreasing flows through the Delta is the fastest way to kill the ecosystem, native and migratory endangered species, and the local communities who will be left with degraded drinking water when the tunnels are operable. These design modifications do not significantly lessen the impacts to Delta communities, nor do they change the fact that the project is an environmental disaster,” she stated.

DWR said the public draft version will be released for formal public review and comment after review and approval by the lead agencies, expected in July 2018.

“All interested parties will have an opportunity to provide comments on the public review version of the Draft Supplemental EIR/EIS during that time. Responses will be prepared only for comments submitted during the formal public review and comment period,” according to DWR.

Bill Jennings, Executive Director of the California Sportfishing Protection Alliance (CSPA), noted there are an amazing 425 megabytes of information in the administration draft — and is concerned the  State Board could expect his organization and other parties to provide rebuttals based on the administrative draft, not the formal draft issued for public review.

“My concern is that this administrative draft could be an attempt to short circuit the process. This evidentiary hearing has been going on for three years and the State Board appears to be in a headlong rush to complete the process before Brown leaves office. We don’t know yet,” concluded Jennings.

The agency will send a notification out when the public Draft Supplemental EIR/EIS is available for formal public review and comment as required by CEQA and NEPA.