Usually, big spotted bass come to mind when I think about a trip to Bullards Bar Reservoir, but today, I loaded my Hobie Outback into my truck and headed to the lake in search of kokanee.
I’m not much of a trout and salmon angler and would have never considered spending a late June morning trying to catch 12” fish on a noodle rod when there are giant bass to be had, however, the Hobie has greatly changed my perspective. 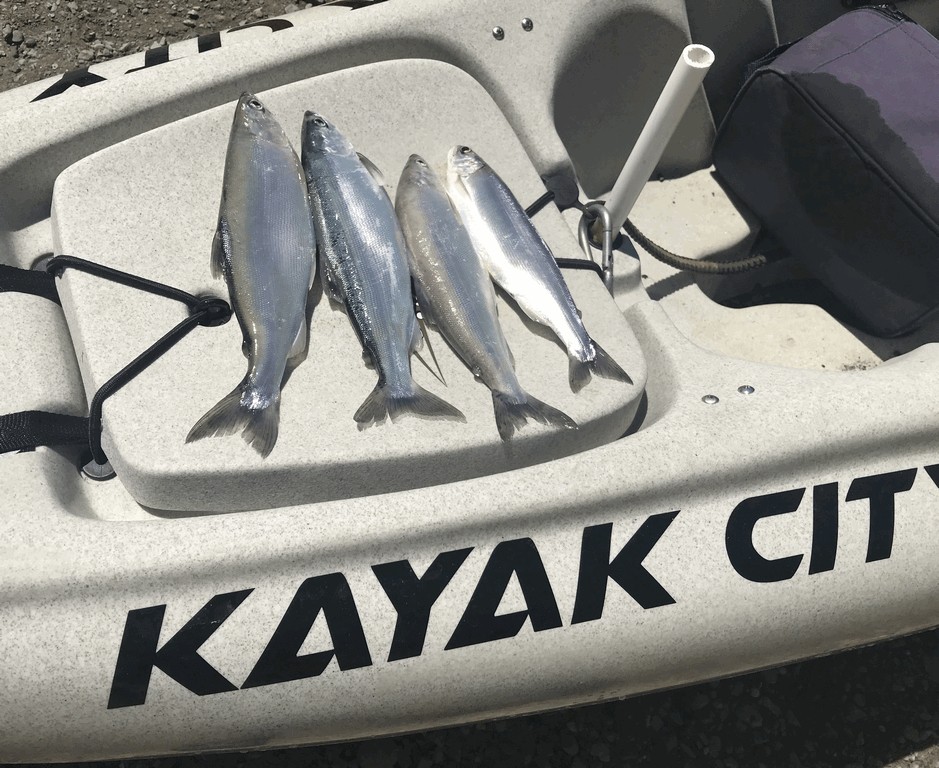 Yes, it is a fantastic bass catching machine, but it also excels at trolling, especially in lakes. Earlier this spring, I landed my first trout in the kayak at Collins Lake, and have had trolling success at Folsom and Rollins. The ability to pedal comfortably all day for extended distances makes trolling much more enjoyable than my previous paddle kayaks. So, I decided to try my luck at landing my first kokanee. 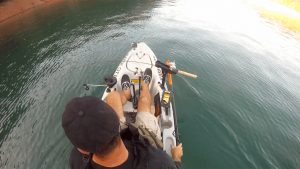 With a very light tackle load of a couple of dodgers and a single small box of hoochies and Wedding Rings, I rolled off the launch at Emerald Cove towards the dam.
Within a few yards of clearing the marina, I let out some line, and dropped the downrigger down to 40 feet. Before I even settled into a peddle rhythm to maintain just under 1 MPH, the rod tip started bouncing like crazy.
Cal Kellogg gave me some kokanee tips earlier in the week, and mentioned that they probably wouldn’t hit hard enough to pop the release, so after waiting a few seconds to make sure the fish was really on, I pulled the rod out of the Scotty holder, reeled in some line, and set the hook as if it were an eight-pound spotted bass on a jig.
My Okuma SST Kokanee rod doubled over as I slowly reeled the fish from the depths. As the small salmon broke the surface, it put on a spectacular aerial display. I worked the spunky fish around to my right side and swept the net gently beneath it like a pro!
WHAM! My first ever kokanee was in the floor of my Outback just like that!
This is exactly how you want to start any outing, especially when chasing a species with almost zero prior experience. 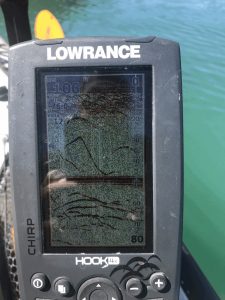 For the next four hours, I hooked into a bunch more ‘kokes. I lost a few shortly after popping the downrigger release, and a couple others on the surface.
My biggest challenge of the day, however, was duplicating the perfect net job I started the day with. I can’t even count how many I missed either at the net, or when lifting the net onto the deck at the bow of the yak. Many of the boaters sharing the trolling lane with me had a good laugh at my expense every time my catch would find its way back in the water just seconds after pulling them out of it, but I honestly didn’t care. I was having a blast.
My setup was very simple. I use a Scotty Laketroll Downrigger mounted in a standard Scotty recessed mount. A 3 pound ball was more than enough to keep the line almost vertically below the boat.
The most productive combination was a Paulina Peak micro-hoochie 12” behind a Paulina Peak hammered kokanee dodger. Pautzke Fire Corn tipped the hooks of the hoochie. An Abu Garcia 5500 spooled with 8 pound Yo-Zuri hybrid line was more than enough to reel in the salmon on the 7’6” Okuma SST Kokanee rod.
The depth of the troll didn’t seem to matter before 10:30 or so, as the fish were pretty much dispersed throughout the water column from 30-80 feet deep. As the sun began to creep overhead, the fish did drop a little deeper by the hour. My last hookup of the day came at 82 feet.
I rarely peddled my Hobie any faster than 1.3MPH, and frequently let the boat drift to .3 before accelerating with a quick pump of the Mirage Drive, something that a boat cannot do near as well as a kayak can. Almost every bite came 10 seconds after seeing the gear pass thru a school of fish on the Lowrance unit.
I’m not trading in all of my bass gear for noodle rods just yet, but I am definitely going to revisit Bullards again soon to hook into some more ‘kokes.