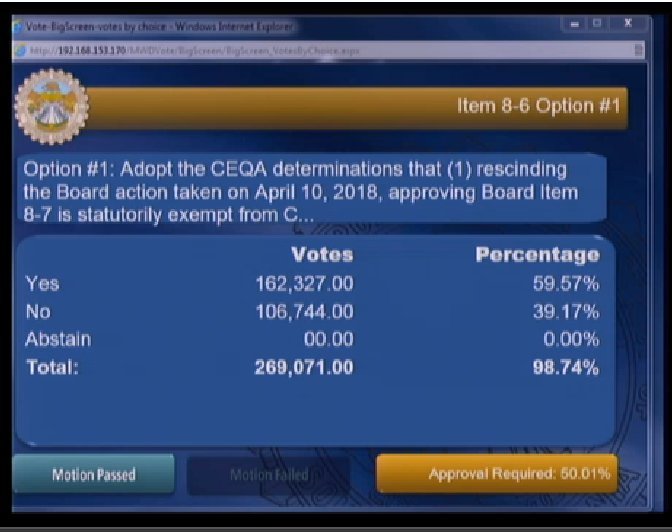 Following numerous violations of the Brown Act that guarantees the public’s right to attend and participate in meetings of local legislative bodies, the Metropolitan Water District (MWD) of Southern California Board of Directors was forced on July 10 to retake their April vote to finance $10.8 billion of the $17 billion Delta Tunnels project.  The vote was 59.5 percent yes and 39.17 percent no.

The yes vote was no surprise, since the Board was under intense pressure from Governor Jerry Brown and corporate agribusiness interests on the west side of the San Joaquin Valley  to finance the majority of the California WaterFix project’s cost.

“We need green jobs here in Southern California and we need to fix California water infrastructure here,” Charming Evelyn of Sierra Club California, one of many water ratepayers at the meeting, told the Board. “Orange County has 21 cities with contaminated water. Why is money going to the Delta Tunnels and not local water cleanup and creation of new green jobs?”

Gerald Serda of the Social-Economic-Justice Network (SEE) Gerald Cerda said people in numerous communities throughout LA County and the state, including  California public schools, drink water that exceeds the legal limit of contaminants at the state and federal level. He said the Delta Tunnels will not fix water quality in California.

After agricultural water districts refused to invest in the project last spring, MWD engaged in “backroom wheeling and dealing” to pressure decision makers to force SoCal families to pay double their share for no additional water, according to Brenna Norton, Senior Organizer with Food and Water Watch.

“While the results of the vote did not change today, members of the public and representatives of the two biggest cities in the state—Los Angeles and San Diego— among others, were incensed by what they say is a lack of transparency and other violations of the California constitution. The Delta tunnels have not received full funding, and still require multiple permits,” said Norton.

The revote took place after two organizations, Food and Water Watch and the First Amendment Foundation, sent a notice exposing numerous violations of the Brown Act in connection with the April meeting: www.dailykos.com/…

Metropolitan board Chairman Randy Record said the action was taken in “an abundance of caution to ensure full public transparency.”

“California’s water delivery system is broken. After years of study, planning and environmental review, we finally have the solution. I am thrilled this project continues to move forward,” claimed Record.

Director Lorraine Paskett, who represents the City of Los Angeles on the Board, thanked Food and Water Watch for their California Public Records Act (CPRA) request exposing the backroom wheeling and dealing prior to the April board meeting.

Before voting no, she also noted that the recent plan by the State Water Resources Control Board to increase flows down the San Joaquin River and its tributaries to restore fish populations impacts the WaterFix project’s economic viability.

Mark Gold, another board member from Los Angeles who also voted no, also criticized other board members  for voting to finance the Delta Tunnels without first reviewing the impact of the water board’s new river flow criteria. “This vote is premature without such analysis,” said Gold.

Norton emphasized that today was “the opening salvo of ongoing efforts to expose the unfairness and political cronyism behind the Delta Tunnels deal.”

“The tunnels would be at least a $20 billion gift to corporate agribusiness, which receives 70 percent of average water exports from the Delta,” she said. “If the project is ever built, Southern California ratepayers and taxpayers would pay for a project that doesn’t guarantee a single drop of new water. SoCal residents should not be an ATM for MWD leadership or wealthy agribusiness.”

The controversial project consists of two massive 35 mile long tunnels that would divert water from the Sacramento River in the North Delta to the state and federal pumping facilities in the South Delta for export by corporate agribusiness interests, Southern California water brokers and oil companies conducting fracking and extreme oil extraction operations. The California WaterFix would devastate Sacramento salmon populations and West Coast fisheries, as well as imperiling the salmon and steelhead populations on the Trinity and Klamath rivers.