On most reservoirs in the state, anglers usually target one species of trout or salmon when they go fishing.

Unlike many waters, Lake Don Pedro, nestled in the Mother Lode foothills on the Tuolumne River in Tuolomne Couty near La Grange, is renowned around the state for variety catches of rainbow trout, brown trout, brook trout, kokanee salmon and king salmon that anglers can catch on the same trip.

This summer the lake, located at 804 feet in elevation, is producing limits and near-limits of both rainbow trout and kokanee salmon for the first time. Unlike in previous years, anglers can catch both five salmon and five trout as part of their daily bag limits, according to new regulations that went into effect this March.

After spotty fishing so far this spring and summer, the kokanee have finally gone on the bite at Don Pedro, according to Monte Smith of Gold Country Sportfishing. 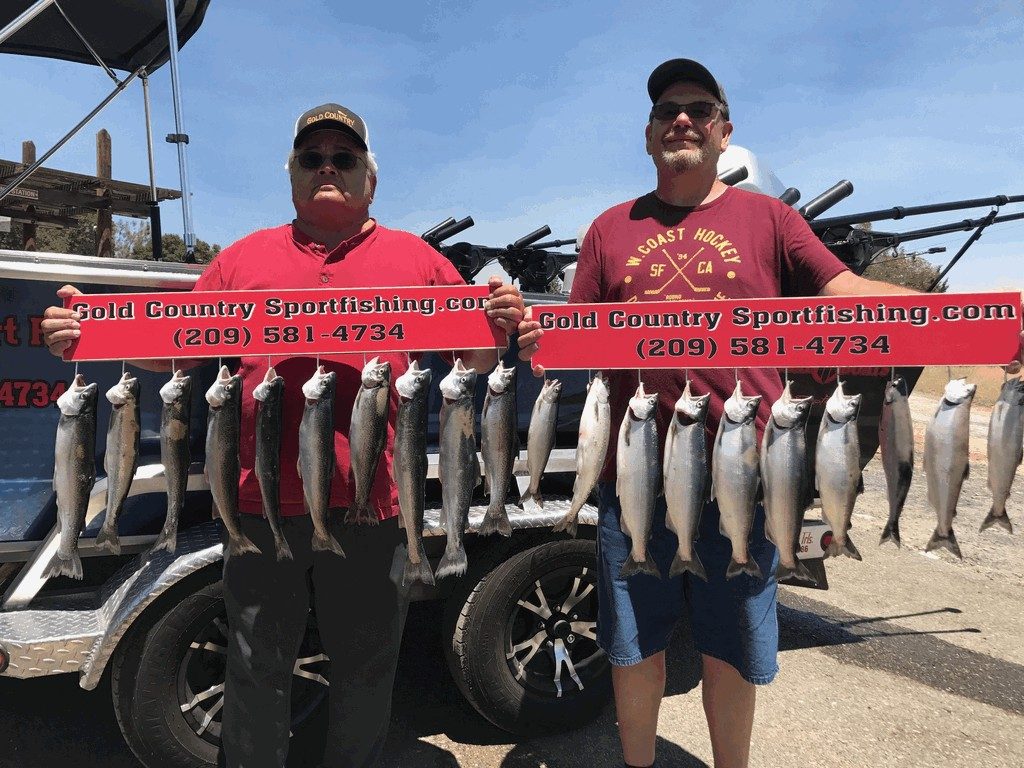 “Then on July 18, the 3 guys fishing with me ended up just two fish short of full limits by catching 14 rainbows and 14 kokanee totals,” he said. “They returned 7 of the trout back into the lake.”

The kokanee caught that day ranged from 10 inches to 17-3/4 inches and the average fish was 14-1/2 inches. The rainbows ranged from 12 inches to 3 pounds.

Smith and his customers have been hooking the kokanee while trolling Micro-Hoochies and Brad’s Cut Plugs behind Sling Blades and Vance’s Dodgers at 40 to 60 feet deep, with the best depth at 40 to 50 feet. The rainbows are mixed in with the kokanee and are hitting the kokanee set-ups.

This appearance of kokanee in large numbers in mid-July is unusual, since the kokanee have usually already started migrating up the Tuolumne River to spawn by late July or early August – and normally can’t be found anywhere on the lake.

Earlier in April, Smith was focusing on catching rainbows with big spoons and landed fish up to 4-1/2 pounds. The rainbows being caught in Don Pedro now are a mixture of wild fish, holdovers and fish from an emergency plant in March. Mixed in with the rainbows are some colorful brook trout.

Located downstream from the Moccasin Creek Hatchery, Don Pedro received an emergency plant of 150,000 rainbow and brook trout in late March when the California Department of Fish and Wildlife (CDFW) had only a small window of time to return to the evacuated hatchery and rescue fish after the hatchery was flooded by a storm-swollen and overflowing Moccasin Creek Reservoir that sits immediately upstream from the facility.

The total weight of trout stocked in Don Pedro immediately after the flood was approximately 40,000 pounds. “This emergency measure made the best use of resources in a catastrophic situation,” according to a CDFW press release.

“CDFW biologists, hatchery staff and wildlife officers worked well into early morning hours to rescue fish and stock them into Don Pedro. Don Pedro is home to many species of game fish, but hadn’t been planted with trout by CDFW since 2016,” the Department said.

The kokanee being caught now are a mixture of naturally spawned fish and those planted by the CDFW as fingerlings. The Department planted anywhere from 5,000 to 20,000 kokanee fingerlings per year in Don Pedro from 2006 to 2017.

Less fish are planted in Don Pedro than many other lakes because the plants are regarded as supplemental with such good natural spawning conditions for kokaee found in the Tuolumne River.

Kokanee were planted in the lake in 1981 but it wasn’t until 1992 that a self-sustaining population of huge kokanee was documented at Don Pedro by the founder of Kokanee Power, the late Phil Johnson of Merced.

That spring and summer, Johnson landed 7 kokanee over 4 pounds while trolling a variety of lures, tipped with white corn, at the lake. He showed the kokanee he caught to the local fishery biologist at the time, who claimed the fish were king salmon, not kokanee.

Johnson then drove all of the way from Don Pedro one day to the home office of then CDFW Tahoe region fisheries biologist Russ Wickwire to show him two big kokanee that had put in an ice chest in his truck.

“Where did you get these huge kokanee?” asked Wickwire.

“I caught them at Don Pedro,” Johnson told an amazed Wickwire. Wickwire made sure that the biologist who misidentified the fish as kings was made aware that these were indeed kokanee salmon.

A wild spawning population of king salmon, the progeny of plants at the lake, also exists in Don Pedro. James Pagani, the owner of Sparklefish Lures, and I first documented the presence of naturally spawned fish when we caught some beautiful king salmon at the lake in the mid to late 1990s during a period when salmon and trout plants were suspended, due to a copepod infestation.

The CDFW now plants king salmon in the reservoir every year when the fish are available. The Department last planted the kings in 2015, when 50,000 fish were stocked. They also stocked 87,032 kings this year.

Kings grow big in this forage-rich reservoir. I landed a king over 8-1/2 pounds while trolling with shad in the spring of 2008 with Bruce Hamby, then a guide at the reservoir. I also landed one over 5 pounds while fishing with Monte Smith three years ago.

The king fishing has been slow to date at the reservoir, but every time you go fishing at this lake you have a chance of catching a monster Chinook. Unlike the rainbows and kokanee that usually pop the line off the downrigger clip when they hit, a big king will often take the bait or lure without pulling the clip off.

Trolling with shad or plugs is the top method for catching kings throughout the year at the reservoir. In general, you will find these salmon deeper in the water column below the kokanee and rainbows.

During the fall and winter when the water is still cold, anglers can hook both trout and salmon from the bank at Don Pedro, but shore fishing is much less popular here than it is as nearby New Melones.

Other species found in Don Pedro include largemouth, spotted and smallmouth bass, crappie, bluegill and channel catfish. Anglers often pick up bass while trolling for trout and salmon, as Smith has found out.

History: Construction of the New Don Pedro Project began in 1967 and was completed four years later at a cost of $105 million. Built primarily to store irrigation water, the reservoir has a capacity of 2,030,000 acre-feet and has many additional benefits including power generation, flood control, and recreation. The old dam is still in place, 250 feet below the surface of the full reservoir. The Don Pedro Recreation Agency, which is responsible for the recreation element of the Don Pedro Project, is sponsored by the Turlock Irrigation District, the Modesto Irrigation District and the City and County of San Francisco.

Blue Oaks: Nestled in the rolling foothills adjacent to Don Pedro Lake is Blue Oaks Recreation Area. Campers awake to scenic views of the central valley or the sunrise over the water of Don Pedro Lake. The campground offers campsites with either partial hookups (water and power) or without hookups – perfect for either RV’s and/or tents. The facility also has a boat launching ramp, fish cleaning station, sewage dump station, a group camping area (for up to 200 people) complete with covered dining area and electric hookups for RV’s, restrooms with hot showers (no additional charge) and a hiking trail.