To cap off our family’s summer adventures, we decided to rent a house in South Lake Tahoe for a few days in late July. Every time we travel, I try to spend at least a day or two on the water, and was excited at the prospect of chasing Tahoe mackinaw from my kayak.
Other than a guided trip years ago, I have very limited experience or knowledge of the Tahoe fishery. Luckily, Cal Kellogg is only a text away. He gave me a basic rundown on what gear to take and a general area of where to concentrate my quest to put a mack in the yak.
During the late summer, there are a couple of areas of the lake that tend to hold a majority of the active fish. The Southwest corner of the lake, near the mouth of Taylor Creek, is one of the commonly known hot spots. It also happens to be exactly where my family decided spend a couple of days on the beach enjoying the sunshine and cool water.
My first day on the water was a late start, and was basically spent exploring a steep drop off about 1/3 of a mile off shore. It didn’t take long to mark large schools of fish laying on the bottom between 90-200′ deep on my Lowrance unit. 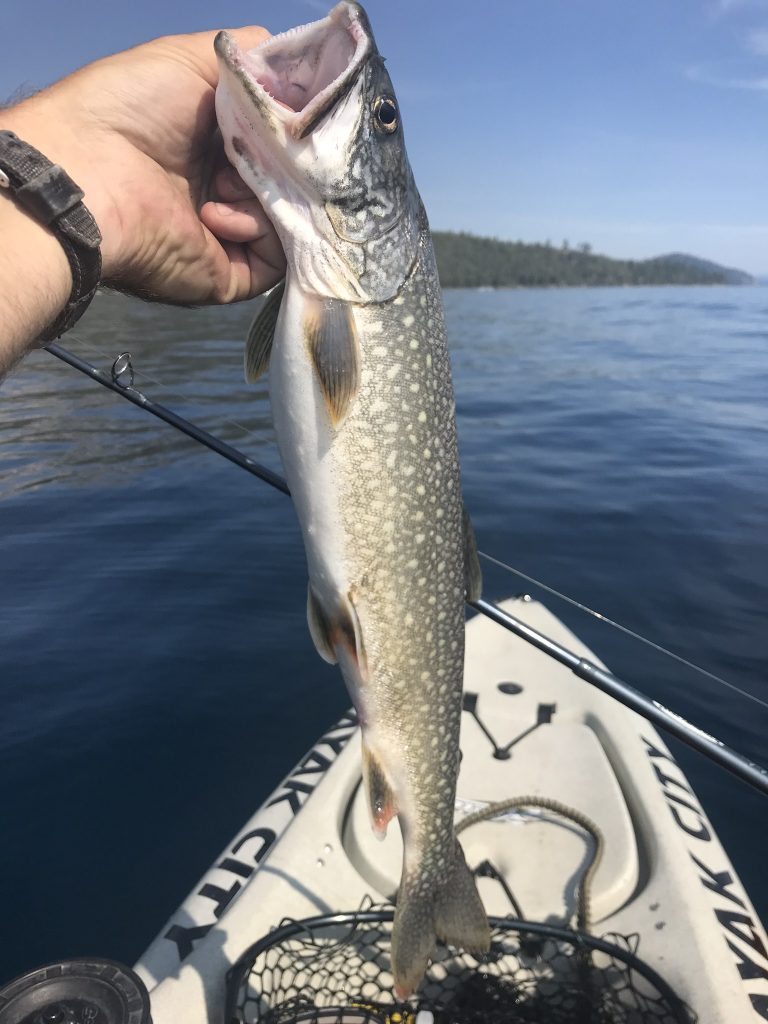 Occasionally, I would pass thru large schools of suspended fish around the 50′ mark, which I assumed to be kokanee. There were also at least 10-12 other boats trolling the same general area, so I was feeling pretty confident that I was in the right place at the right time.
For a couple of hours, I slow trolled a Silver Horde Kingfisher spoon behind a Gibbs Dodger 10-20′ off the bottom. In the back of my mind, I knew the gear should probably be aggressively dragging the bottom for the best results, but I was a little concerned bouncing an 8# ball on the steep contours 150′ deep. Not to mention the fact that cranking up the manual Scotty Laketroll downrigger was a chore if the line clip inadvertently released.
So, I covered about a 3 mile stretch, dropping waypoints on the areas where I marked concentrated schools, and retreated from the mid-day heat and wrath of jet-skis, ski boats, parasailers, float planes and dinner cruises that constantly flew past me way too close for my comfort, with plans to return early the next morning to try again.
The next morning, I peddled off the sand near Kiva Beach around 7AM. As the sun began to emerge over the mountains to the East, there were already a number of pleasure boaters and guide boats on the water.
For round 2, I decided to change up my approach by finding a school of fish in the 100′ range and hammer a small area by dragging my gear right on the bottom. It didn’t take long to encounter a concentration of Macks 120′ deep on a small ledge less than 50′ long. I spent 2 hours focused on the spot without a bite. It was challenging to constantly raise and lower the downrigger to maintain bottom contact, and snagged my gear more than enough times to curse at the manual downrigger. Boat traffic also pushed me off the ledge constantly, so I was forced to make large circles over deeper water to get the correct line of approach to keep the gear on the fish effectively.
While circling off my spot, I found an enormous concentration of marks on a large flat in 160′ of water, almost exactly at the limit of my downrigger line. There were also a number of guide boats chasing kokanee on the same contour, so I decided to push my luck and move deeper. 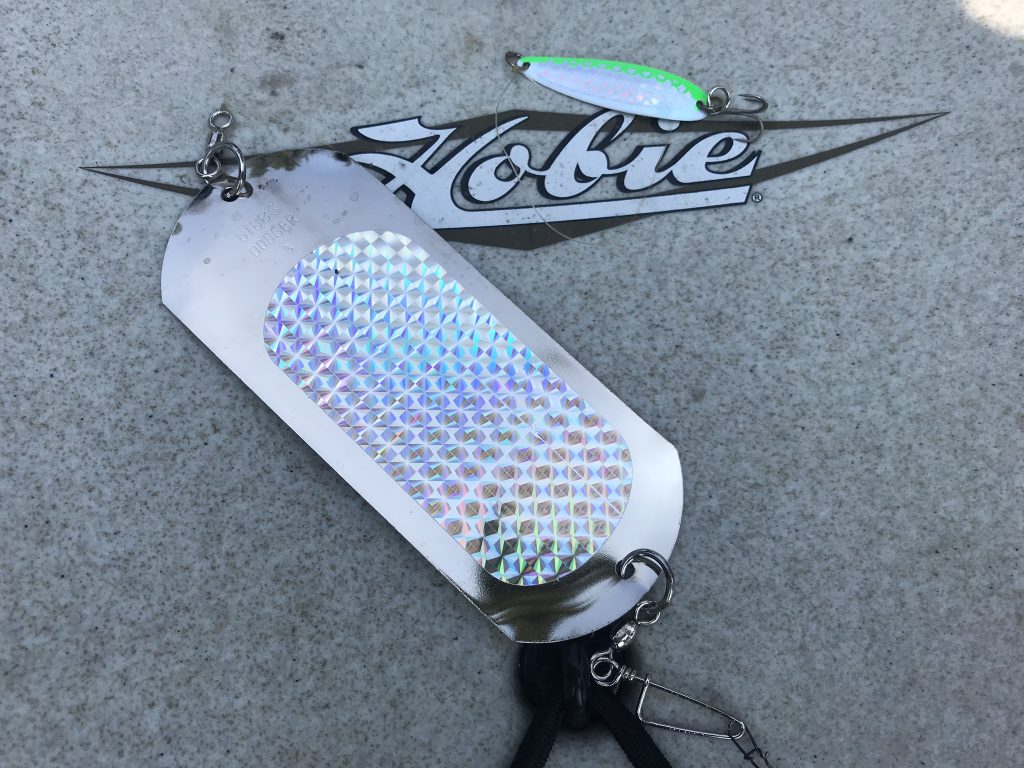 On my third pass thru the fish, my rod bounced violently one time, but didn’t release from the clip. I assumed it snagged for a second, and considered bringing up the gear to make sure it was not tangled, but was honestly exhausted from cranking the downrigger 160 turns up and another 160 turns down, so I kept creeping along at just under 1 MPH.
Less than a minute later, the deflection angle on the down line aggressively changed to a 45 degree angle directly off the side of my Hobie towards deeper water. I watched it closely as the Dacron downrigger line slowly swung forward indicating that the ball was actually in front of me.
At this point, I knew that I was either snagged in the gear of a passing guide boat, or had a fish on. Hoping for the latter, I grabbed the rod from the holder and set the hook, popping it from the release.
Immediately, I felt the unmistakable head shakes of a mack on the line. I had a considerable amount of line out with a 50′ setback and 160′ down, so I took my time reeling the lake trout to the surface.
Learning from my recent kokanee excursions, I had the net on the bow of the yak ready to scoop up the trout as soon as it was in reach. I was not going to lose this one!
As the mackinaw neared the surface just to the right of my bow, I landed it smoothly into the net and got the fish in the floor of the yak with zero wasted motion. YES!!!! Mack in the Yak!!!
Mackinaw in general are plentiful in a number of California lakes, and are not terribly difficult to target for most anglers. However, this was definitely one of the most difficult kayak challenges I have accomplished since I first began kayak fishing a decade ago.
Tahoe itself is BIG. The sheer size and depth of the lake was a bit daunting compared to most of the places I have fished before. There is also a TON of boat traffic on Tahoe, especially in the summer months.
In my 12 miles of trolling over two days, I was never more than 100 yards from another boat, most of them pulling skiers along at a good clip. I also pushed the limits of my gear and often times felt very sketchy about the possibility of my downrigger snagging bottom and turtling me at just the wrong time.
It certainly wasn’t a record catch by any stretch, but I will definitely remember this trip as a grind where persistence paid off huge in the end. My goal was to put a mack in my kayak with little knowledge of the lake or how to best target the fish.