The bite had gone from nerve rackingly slow to red hot in the span of minutes. It was go time and I needed a giant.
Digging through my cooler of frozen bait, while struggling to keep my feet on the wildly pitching bow of the California Dawn, I found the bait I was looking for.
It was an 18-inch mackerel that weighed nearly 2 pounds. When I caught the mackerel a month before, I’d carefully brined it, wrapped it in plastic wrap and tucked it away in the freezer thinking it might come in handy during the annual High Roller Lingcod Derby. 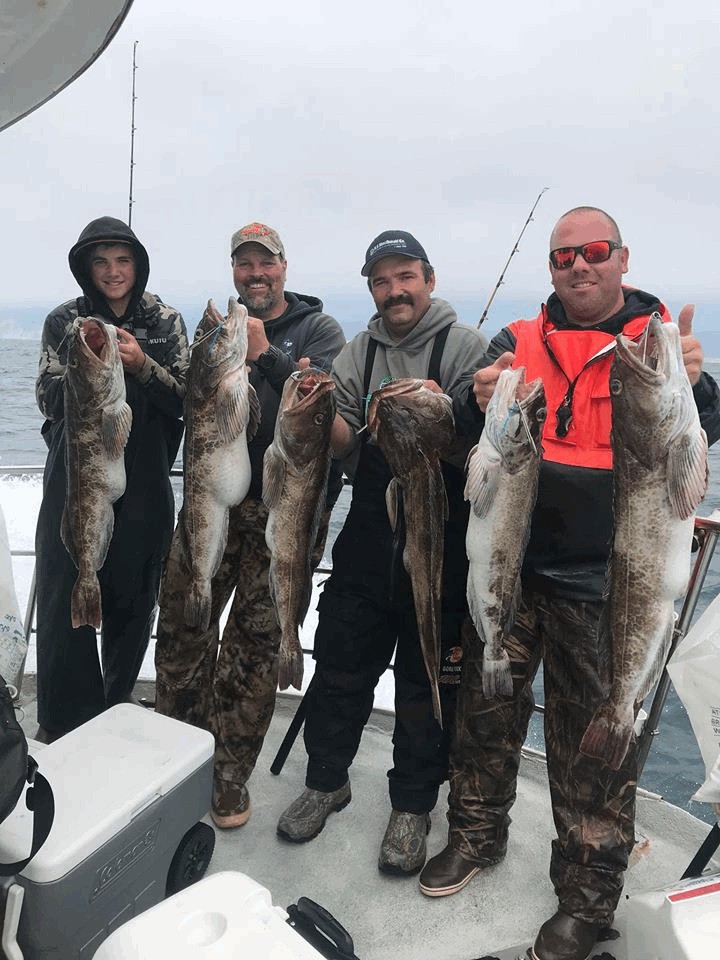 Pinning a massive 10/0 Gamakatsu octopus hook through the mackerel’s head, I then positioned a scary sharp 8/0 Owner treble hook in the mackerel’s back about 3 inches from the tail.
Easing the rigged mackerel into the water accompanied by a 32 ounce sinker, I slowly thumbed the rig to the bottom. Controlling the speed of the rig was crucial since the last thing I wanted was for that big bait to start spinning and foul the leader at such a pivotal moment.
Presently I felt the sinker hit the bottom. I engaged the big Penn Senator and cranked the reel handle twice. A one pound sinker wasn’t enough weight to hold the bottom, but the two pounder was just about perfect and as a result my line stayed nearly vertical.
I expected action right away but that didn’t happen. Five minutes passed and then ten…Periodically I’d dropped the bait, find the bottom and then reposition the rig just off the rocks.
The strike wasn’t really a strike at all. It was signaled by a little unnatural pressure. At first I thought I might have wrapped another line, but when I felt a pair of weak tugs I knew it was a fish.
I let the ling hold onto the bait for a long time, perhaps 30 seconds or more. At that point, I started to ever so slowly crank the fish off the bottom. One crank, two, more…
When I figured the fish was 20 to 30 feet off the bottom, it suddenly came to life. First there was a series of violent tugs and then the rod loaded. The ling had turned and was trying to swim back to the bottom!
Thumbing the reel, I allowed the fish to pull the rod tip down as far as possible and then I swung hard. My rod was spooled with 65 pound braid and my leader was constructed out of 60 pound Yo-Zuri fluorocarbon, so I wasn’t worried about breaking the fish off on the hookset.
On the contrary, I wanted to drive the hooks home and turn the fish back toward the surface.
I had no idea how big the fish at the other end of the line was until I set the hook and the fish barely budged…I was locked up with a monster!
“Fish on in the bow,” I yelled. I was pumped and excitement induced tunnel vision set in.
The ling made several blistering power dives, each time the Baja Special’s drag stopped the fish short before it could reach the safety of the rocky reef.
The fish was in 150 feet of water when I hooked it and it was a long crank to the surface. When a huge mottled mass appeared off the port bow, Captain James Smith was at my side.
The gaff stabbed into the water. James made a perfect “head shot” on the fish and hefted it over the rail. I guessed the ling’s weighted at 25 pounds.
I’d tagged my first fish, a small 7 pound ling, when the fishing was slow. When I tagged the big fish, I was “tagged out” meaning I had my two fish for the weigh in. The big ling, was the biggest I’d seen landed and I suspected (correctly) that it was the biggest lingcod on the boat.
With good fish coming in steadily at that point, the question was whether or not the combined weight of my two fish would be enough to hold off the competition.
If you’ve never heard about the High Roller’s Lingcod Derby, the contest works like this. Every keeper lingcod caught during the contest goes into the box. The outcome is based on the heaviest two lingcod limit. It is up to the angler to designated which fish he wants to tag at the time of catching them. 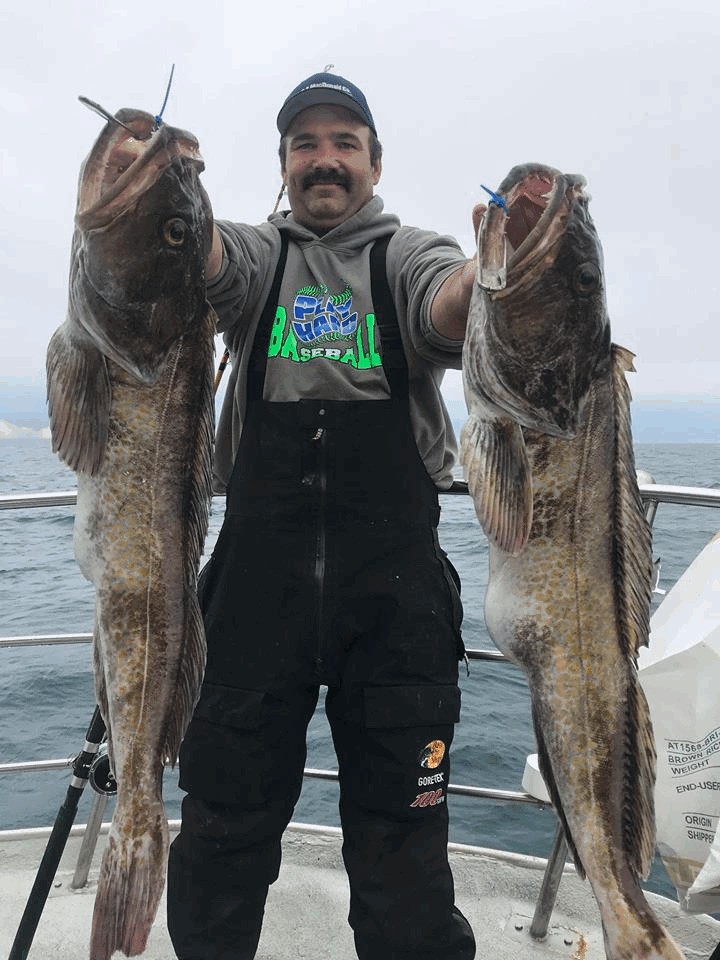 If you tag out on two medium size fish and then hooked a monster, you’re out of luck and the big fish simply joins the rest in the box.
Likewise, if you play cat and mouse too long you might end up not tagging a pair of fish before limits hit the deck and the contest is called.
In addition to the lingcod segment of the contest, there is also a side pot for the biggest 10 fish rockfish limit.
In years past we’ve enjoyed great ocean conditions during the High Rollers trip, but this year was an exception. The water along the Marin Coast wasn’t super rough, but it was cold and the fish there had lockjaw. Ultimately, we opted to push north to Point Reyes, where the water would be much rougher and hopefully warmer.
“When we got to Point Reyes, I really thought about calling the trip due to weather, but the lingcod guys that come on the trip are pretty hardcore. On the plus side the water at the point was 6 degrees warmer than it was down toward Duxbury. In the end, we all committed to tough it out and it paid off big time,” exclaimed Captain James Smith later in the day. 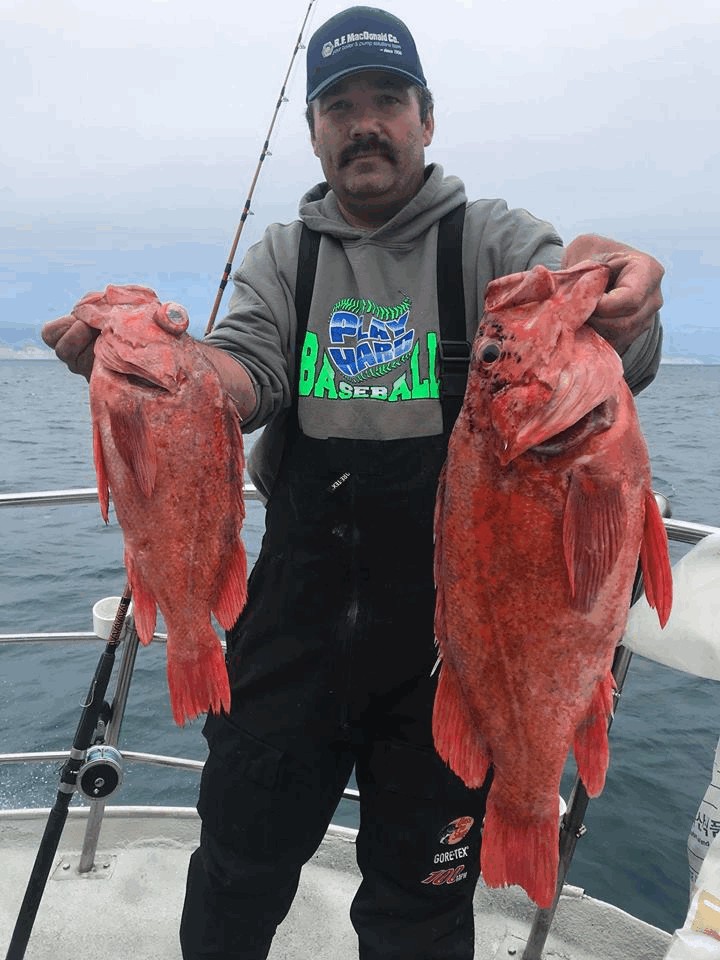 How rough was it? Jagged 8 foot high wind waves were constant. It seemed like the further north James strayed to start a drift the bigger the water got.
At one point, I looked up from the bow and was confronted with a massive swell that looked like a small hill. I have no idea how big the swell was – 12 to 15 feet? It was one of the biggest I’ve ever seen!
Up we went and when we reached the top there was a lot of open air between the tip of my rod and the surface of the water far below!
The fishing was extremely slow for most of the day. I didn’t catch my first fish until about 1 o’clock. That’s how I came to tag such a small fish. At that moment with few fish coming over the rail I figured if I could combine the little fish with a decent ling I’d have a shot at the title.
The problem with this strategy was that right about the time I got my first fish, the bite went from nonexistent to wide open. Suddenly the fish were on the chomp and it seemed like a lot of 10 to 15 pounders were coming over the rail. I saw some fish that looked to be huge lost up on the bow.
While I reeled up my 25 pounder, Will Cook was right around the corner of the wheelhouse from me working hard. First, he landed a nice matched set of lings in the 16 to 17-pound class. With his lings landed he started targeting rockfish and hooked good fish while others struggled to catch any rockfish at all.
At some point, Will nailed a jumbo vermilion that weighed several pounds, which would be the anchor of his rockfish bag…
By 3 o’clock we were done fishing with 28 limits of lingcod in the box and half limits of rockfish in the sacks lining the rail. As soon as we got into calmer water it was weigh in time.
It was tense. I knew I had a big fish, but I had no idea what had come over the rail toward the back of the boat.
The California Dawn’s deckhand/second skipper Mike Verone put all the lings on the deck and sorted out the best limits. From there it was head to head elimination via the balance beam.
To my surprise, my jumbo fish and tiny fish duo were holding off all challengers. And then there was Will Cook’s fish. The first couple times Mike held up the balance beam it looked like a dead tie. On the third attempt the beam tilted just a bit toward Will’s fish and both Mike and I declared Will the winner. James wanted to verify it himself and once again the beam nodded a few degrees down toward Will’s fish.
Will took home a wad of cash for his dandy limit of lings. I took home a smaller, but still totally awesome fist full of greenbacks for second place.
The rockfish side pot also went to Will virtually uncontested. Nobody had landed anything in the rockfish category that could compete with Will’s jumbo vermilion.
Will Cook is the 2018 High Rollers Lingcod Champion. On behalf of all the other contestants and the crew of the California Dawn, congratulations Will. The title couldn’t be in the hands of a better angler or finer gentleman!