The destination was French Meadows Reservoir and I had no idea what to expect. I’ve had exceptional trout fishing at the lake in early summer and very good action in early fall, but it was August, the height of the warm weather doldrums.
Since it was the dog days of summer, I brought my Labrador Lucy along for the adventure. She’s like any other girl, she likes to swim and she likes to lay in the sun on the back of the boat. Except in this case we wouldn’t be in a boat, we’d be in my Hobie Pro Angler 14 kayak.
I wanted to arrive at the lake just before sunrise in order to take advantage of the key post dawn window prior to the sun hitting the water. I figured I’d allowed plenty of time for the drive to the lake, but I hadn’t. In fact, when I pulled up to French Meadow’s rear launch ramp it had already been light for an hour.
Well when presented with a basket of lemons what do you do? My answer is to bake a lemon meringue pie, but Lucy and I didn’t have time for baking, there were trout to be caught! 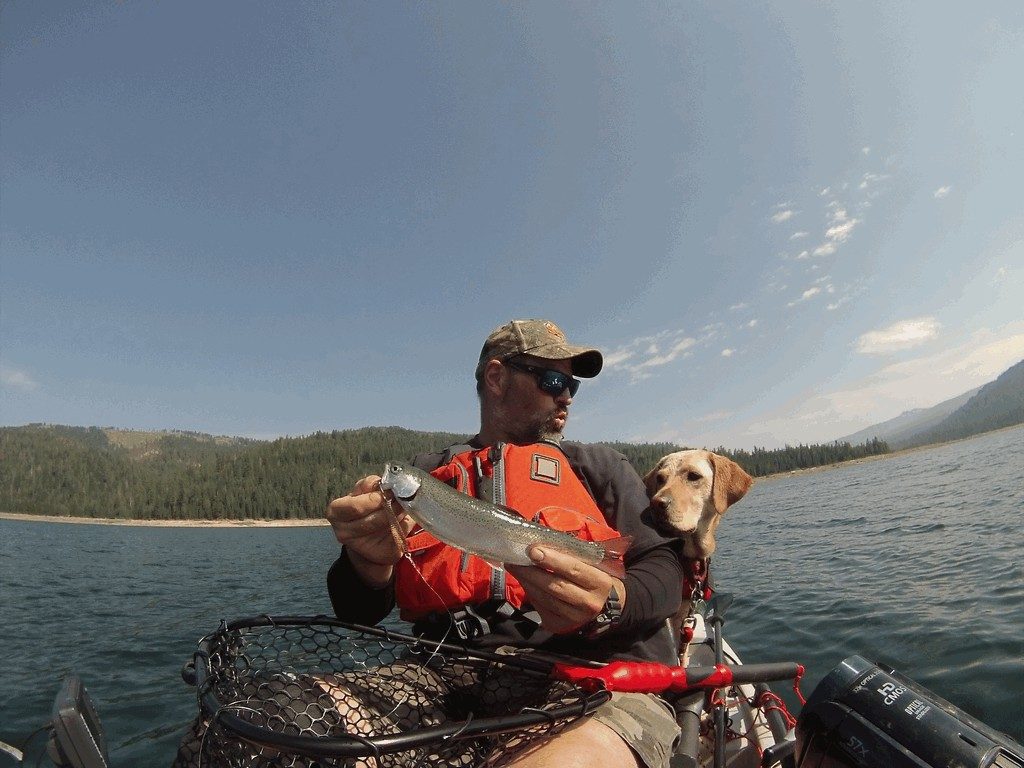 Running around the truck like a mad man, I rigged the kayak, strapped Lucy into her PDF and quickly shoved off.
Over the years, I’ve done a lot of bank fishing at French Meadows, but I’d only fished it from a boat one time. I was torn between turning right heading out to the middle of the lake to work deep water or hanging a left to work the area where the river channel enters the lake. I’d done well while fishing the channel from the bank, so I turned left.
While there are some dandy browns in the lake, I didn’t expect to catch any. My thought was that I’d probably be able to catch a few planter and/or holdover rainbows. 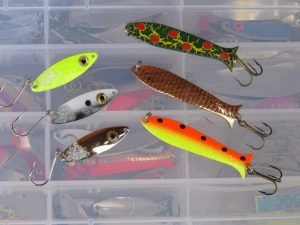 With this in mind, I decided that a bright orange Ex-Cel spoon in the small size would be a good lure to get started with. I spooled the naked spoon back about 50 feet, clipped it to the small Scotty downrigger and positioned the lure 15 feet below the surface.
I’d covered a hundred yards or so when I encountered the edge of the channel. Watching the sonar unit as I peddled along at 2.5 mph I saw the bottom falling away and then suddenly arches started to appear along the edge of the channel down about 30 feet. The arches looked big and my heart sped up!
Turning parallel with the channel I scrambled to drop my spoon down to 30 feet. A beat after reaching that depth the rod began to dance. Snatching the rod from the holder, I kicked on the cameras and started fighting the fish.
The trout didn’t feel massive, but it put up a determined battled. I was thinking rainbow all the way, so I was surprised when a beautiful brown trout broke the surface next to the Pro Angler. 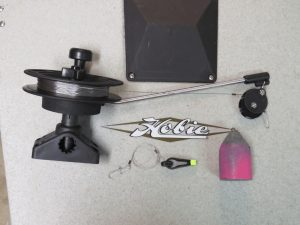 It wasn’t the biggest brown I’d ever caught, but at 16 inches it was a great way to start the day. Believing that I’d found a pattern and a willing group of trout, I wasted no time releasing the brown and getting the gear back into the water.
The sonar showed that the fish were still along the channel edge, but the next pass and the pass after that didn’t produce. On the third pass, it seemed like I marked fewer fish and on the forth pass there were fewer still. Within 45 minutes with the sun getting brighter, all the marks had disappeared.
What to do? My philosophy when trout trolling is, when in doubt troll fast. That’s exactly what I did. I knew I had to be off the water by 11, so I put a copper Speedy Shiner down at 25 feet and proceeded to troll up lake tracing the river channel.
The first hour produced nothing, but around 9:30 I hooked a fish and lost it instantly. A few minutes later an angler fishing from a small skiff landed a rainbow off my port side. Maybe a late morning bite was developing….
Coming back around I hooked up again and this time I got the fish to the boat. It was a dandy holdover or wild rainbow that fought hard and looked like a small steelhead.
I’d like to say I rounded up some more fish, but that wasn’t the case. After a little more trolling, Lucy and I took a swim and headed home.
The fishing hadn’t been red hot, but we’d beat the dog days of August and put a couple high country trout into the ‘yak. I can’t wait for the fall feeding period. I’m going to give some big trout, black bass and stripers a tour of the PA 14!