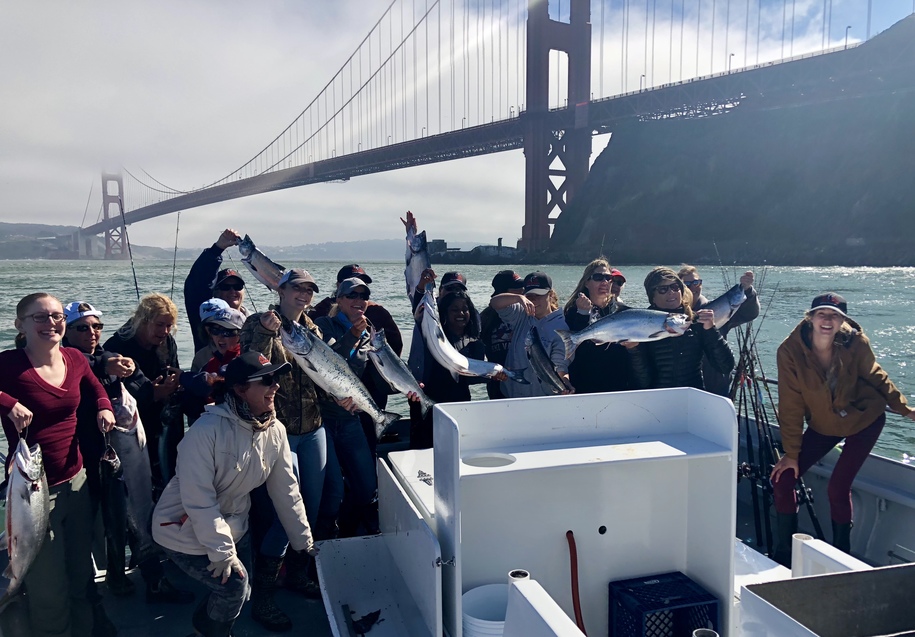 Ocean salmon fishing outside of the Golden Gate is still going strong, although not as consistent as it was a few weeks ago. The Golden Gate Salmon Association’s first-ever “Fish Like a Girl” all-women charter trip produced solid fishing on August 17 aboard the Salty Lady charter boat out of Sausalito.

“The women drove from minutes to hundreds of miles away in hopes of catching the fish of a lifetime and for some, their first salmon,” said GGSA event coordinator Cat Kaiser. “Some of the ladies started the adventure alongside their family or friends and others came by themselves to spend the day together aboard the Salty Lady out of Sausalito with Captain Jared Davis and his deckhands Tommy Watson and Jimmy McNair and GGSA volunteer deck hand Mike Aughney.”

“Captain Jared ran south toward the Pacifica Pier to see if the fish they found limits on the day before were still around and hungry. The weather, sunrise, and foggy view of the GG Bridge couldn’t have been better,” said Kaiser.

The first fish was caught, and the excitement and encouragement started right away. After a couple of hours, Jared decided to run north to join the fleet in hopes of finding more fish. This is when the first big fish came on the boat.

“The ladies all hooted and hollered for each other as more and more fish came over the rail and they were VERY excited about their new company of whales and harbor porpoises that swam around the flat calm water with them,” said Kaiser.

Some of the fish caught were their first-ever salmon and others had caught salmon before. “A hearty lunch and beverages were available throughout the day to keep them fueled to fight their fish and no, no one got sea sick,” according to Kaiser.

“It was great to turn around and see a different lady fighting a salmon pretty much every time you heard ‘Fish On’,” said Kaiser. “From bow to stern, starboard and port, the fish were biting everywhere. It was so fun to see all these ladies out there sharing their passion for fishing and supporting the Golden Gate Salmon Association.”

The 20 anglers ended up landing 16 salmon to 26 pounds, as well as losing some fish.

The mission of the Golden Gate Salmon Association (www.goldengatesalmonassociation.org) is to protect and restore California’s largest salmon producing habitat comprised of the Central Valley rivers that feed the Bay-Delta ecosystem and the communities that rely on salmon as a long-term, sustainable, commercial, recreational and cultural resource. 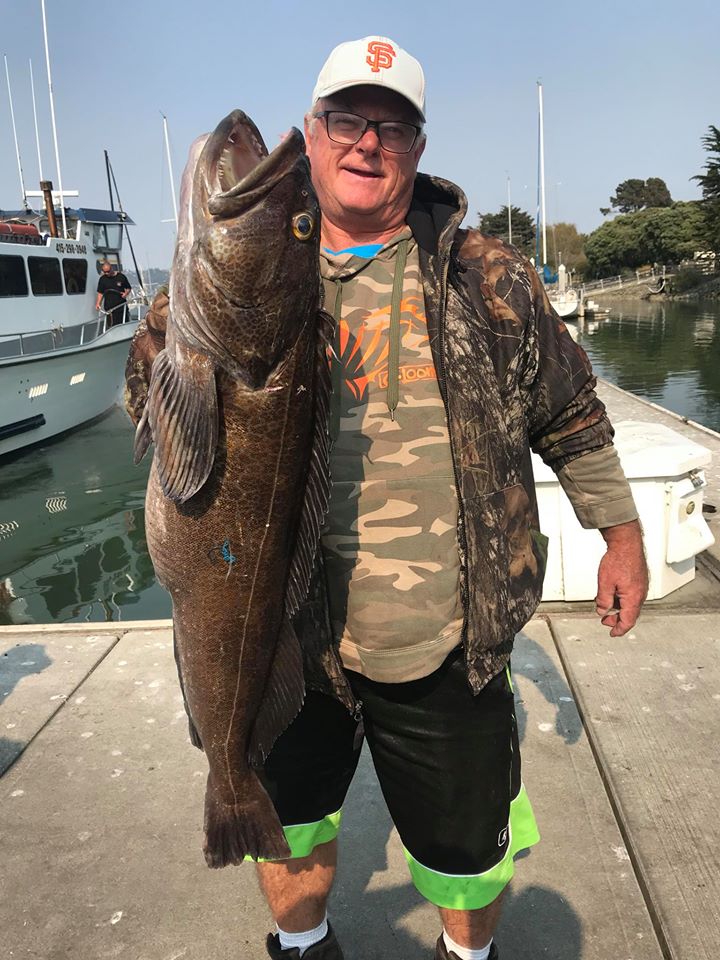 Twenty-four members of the West Delta Chapter of the California Striped Bass Association (CSBA) made their annual trip aboard the California Dawn on August 7, returning to the Berkeley Marina with 37 lingcod, 125 rockfish and two halibut in the 12- to 13-pound range.

“Captain James Smith and I discussed what was the best choice for success,” Roger Mammon, chapter president and secretary of the Board of Restore the Delta, said. “He explained that the halibut bite had been tough, but he was confident we would be able to score on lingcod and rockcod off the Marin County Coast.”

The lingcod averaged 8 to 10 pounds and hit just about everything, including shrimp flies, live anchovies and frozen. The bottomfish included canary, black, China, copper, yellow and blue rockfish, Mammon said.

“The weather was overcast most of the day and the ocean was a little sloppy but not too bad,” Mammon said. “After targeting lingcod and rockfish, we stopped behind Point Bonita on the way in and tried for halibut. The small commercial fleet of halibut fishing boats was there.”

“We made several drifts in the area, but could only land two halibut in the 12 to 14-pound range. We also made a drift at Alcatraz without any success,” he said.

The purpose of the California Striped Bass Association, founded in 1974, is the preservation, protection and enhancement of striped bass. The group’s members are active in the battle to restore San Francisco Bay/Delta fisheries and to stop Governor Jerry Brown’s Delta Tunnels project. For more information about the West Delta chapter, go to: http://csbawestdeltachapter.org/officers.php