Lake Del Valle, a scenic reservoir located 10 miles south of Livermore off Interstate 580 at the edge of the Sunol Regional Wilderness, offers an outstanding array of fish species for anglers to pursue.
The reservoir is surrounded by over 5,000 acres of beautiful oak-covered hills at an altitude of 745 feet.
My first trip to Del Valle was in 1979. I fished the reservoir with two college friends, Nona Armstrong and Sal Murrietta, and we caught a bunch of bluegill while fishing from a rental boat. Since that time, I have mainly fished Del Valle for trout, but there a lot more species than bluegill and trout at Del Valle. 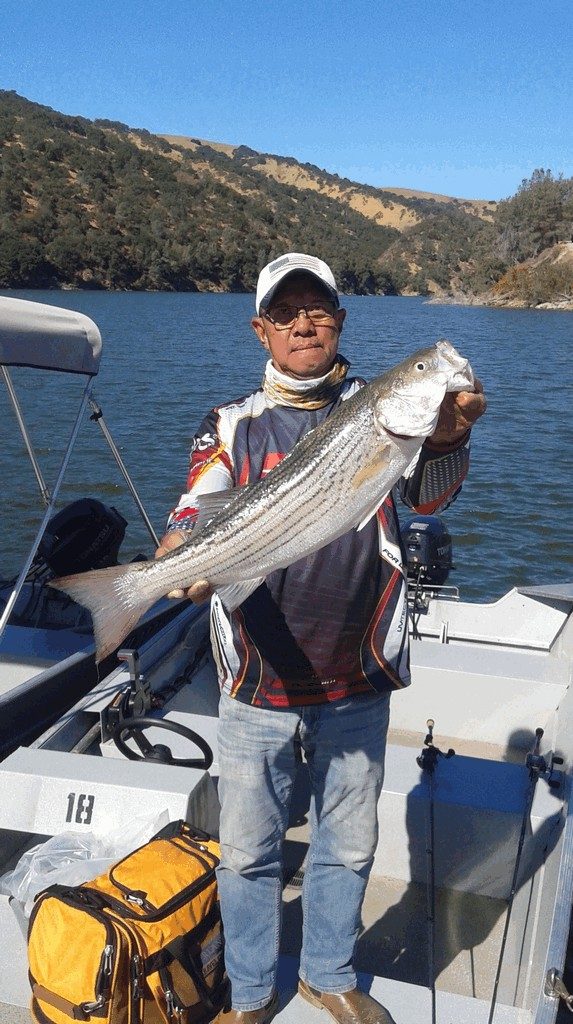 “Del Valle hosts the most diverse fisheries of any Bay Area lake or reservoir,” fishery,” summed up Ed Culver, East Bay Regional Park District (EBRPD) fisheries biologist, in the latest report on the lake’s fish populations. “Anglers target rainbow trout, channel catfish, two species of salmon, bluegill, redear sunfish, black crappie, striped bass, largemouth bass, smallmouth bass, as well as several other species of fish.”
The lake features large resident and self-sustaining fish populations of bluegill, redear sunfish, black crappie, striped bass, largemouth bass, and smallmouth bass, along with regular plants of trout and catfish by the park district and the California Department of Fish and Wildlife.
Del Valle and New Hogan are unique among California reservoirs in that they feature healthy naturally-reproducing populations of stripers. The stripers in Del Valle spawn in the lake’s main tributary, Arroyo Del Valle, and where the creek water merges with the lake waters.
The park district and CDFW stock rainbow trout in the fall, winter and spring when the water temperature is cool. The district then stocks channel catfish in the summer months after the surface water temperature becomes too warm to stock rainbows. 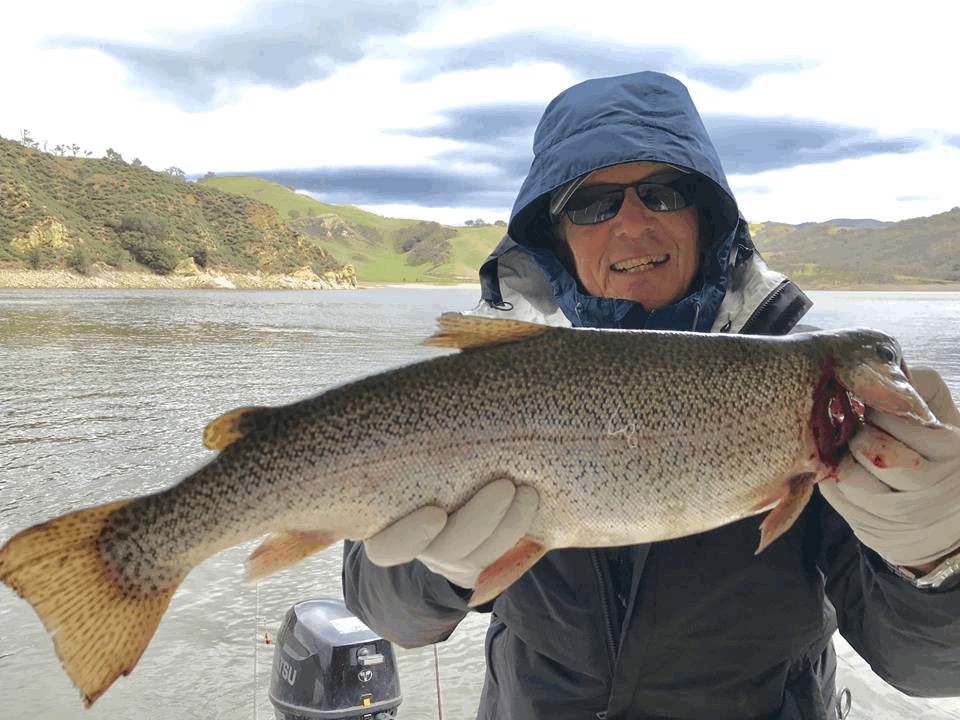 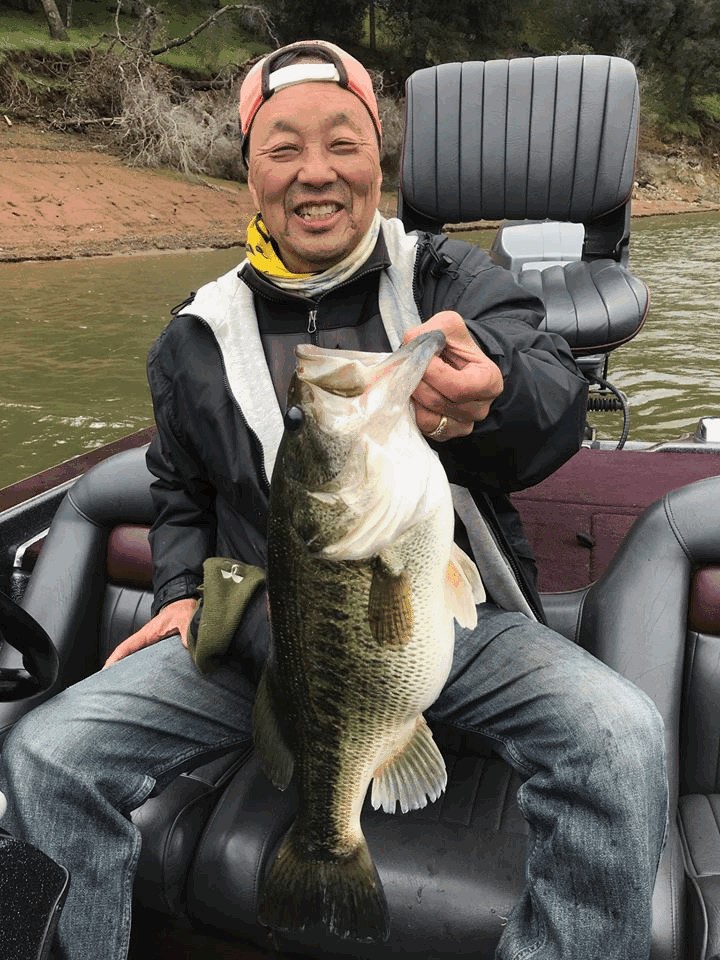 “Largemouth bass comprised the most numerous fish species captured most years, except in 2013 when large numbers of smallmouth bass were observed,” he stated. “The size class distributions of largemouth bass show large numbers of juvenile bass for all years, suggesting that bass have had several successful spawning years in Del Valle “
Culver said the smallmouth bass had a very good reproductive year in 2013 and that cohort appears to have survived in subsequent samples.
“Based on these observations we expect the smallmouth bass fishery and the largemouth bass fisheries to continue to be very good at Del Valle,” he stated. “Although we observed the fewest number of bluegill in 2013 compared to subsequent sample years, their size-class distribution suggests the population is remaining very stable with good numbers of juveniles and adults present,” he noted.
“It looks as though the bluegill are recruiting well, and we see a large number of bluegill in the juvenile and young-adult age ranges, suggesting that recruitment into the population is very strong. Bluegill, and inland silversides are very important forage fish for the larger predators in Del Valle. Although they are not included in this report, we continue to see very large numbers of inland silversides on an annual basis,” he noted.
He said the adult largemouth bass population appears to be steady at around 400-700. Culver noted that only individuals greater than 11 inches are included in the estimate, and surveys are conducted only in the south end of the lake.
“Although the largemouth bass population survey was not conducted in 2016, our results indicate that the largemouth bass population in Del Valle is remaining fairly stable and this trend is likely to continue due to the successful spawning and good recruitment of juvenile largemouth bass growing to the adult stage,” he observed.
Some of the largest fish caught and reported by anglers in the recent years include: a 9 lb. 4 oz. largemouth bass, a 9 lb. 4 oz. rainbow trout, several striped bass ranging from 14 lbs. up to 19 lbs., two smallmouth bass over 2 lbs., a 3 lb. black crappie, and multiple catfish over 12 lbs., including one that weighed a whopping 34 pounds, five ounces.
Del Valle also received plants of inland chinook salmon and kokanee fingerlings from the CDFW from 2006 through 2014. Del Valle received 20,000 chinook fingerlings and 20,000 kokanee fingerlings in 2013 and 10,000 chinook and 20,000 kokanee fingerlings in 2014. However, the Department hasn’t planted kokanee or chinook fingerlings in the reservoir since 2014.
“We have seen striped bass populations at Del Valle continue to grow, and we expect that fishing for striped bass will continue to improve,” he stated.
Culver said the fish communities in Del Valle, especially largemouth bass, appear to be “fairly robust.”
“All indicators point toward the smallmouth bass fishery improving over the next couple years, further improving the high diversity angling that Del Valle is noted for. Thus, it is important we continue to monitor these fish communities because the more we can learn about them, the better we can make decisions to manage this important fisheries resource,” he concluded.

Water level and size: The water level at Del Valle Lake fluctuates seasonally from a high of 703 feet in the summer to a low of 678 feet in the winter. The lake stretches for 5 miles and has 16 miles of shoreline. Swimming is allowed, but keep dogs away from the water.

Camping: The Del Valle Family Campground has 150 sites, 21 have water, sewage and electrical hookups. The sites are served by centrally located toilet and shower facilities. There are also 7 group campgrounds. For family or group reservations please call (888) 327-2757, or visit http://www.ebparks.org for more information. Reservations can be made at least 12 weeks in advance.

Fishing Season: Fishing is open year around at Del Valle. Anglers 16 year of age or older must purchase a CDFW license and an East Bay Regional fishing permit. The cost of the daily fishing permit is $5.00. The revenue generated from the sales of the fishing permits allows the District to stock rainbow trout and channel catfish (each fish between 2-10 lbs.) on a weekly basis.

Regulations: The lake speed limit is 10 mph and fishing is permitted only during the posted park operating hours. NO FISHING is permitted in the stream entering the lake except during the regular State trout season. The limit for all species is five fish per person per day. For fishing regulations, visit the California Department of Fish and Game.

Marina Services: For your convenience there are two stores which provide grocery items, ice, hot and cold drinks and snacks, toys, swimming apparel, camping goods, and firewood. The marina provides the California state fishing license and the East Bay Regional fishing permit, bait and tackle, and a boat rental fleet of motorboats, patio boats, pedal boats, canoes, and row boats. Any size boat may be launched at the paved boat ramp, offering 6 lanes for your use.

Swimming: is permitted south of the boat ramp in the designated areas only as shown on map. Lifeguards are on duty as posted. Swimming is permitted north of the of the boat ramp, although no lifeguards are on duty; Swim at your own risk. NO FLOAT TOYS are allowed at the Beaches. Other activities include 67 miles of hiking and horseback riding trails, a nature study area, and much more which will keep you and your family and friends entertained.