The fabled Sierra Nevada wind had come up early and now it was really blowing. The surface of the lake was covered in white caps and all the power boaters had long since thrown in the towel and their boats were back on their trailers.
Trolling into the teeth of the wind I had to peddle steadily to maintain 2.5 miles per hour. If I got off the peddles even for a second the wind would catch the bow and the Hobie Pro Angler would start to spin around. At times the kayak would ride up on one roller, slide down the back side and the next roller would break across the bow, covering the front hatch with white water that flowed back into the self-bailing cockpit.
Despite the big wind and big water, my Labrador Lucy and I were pretty comfortable and dry. And of course, we were both wearing lifejackets just in case.
Testing the big kayak in rough conditions was fun and games, but the focus of the adventure was exploring new areas of the lake and catching trout. The exploring was going well, but the trout catching was pretty slow when I spotted a unique bank. 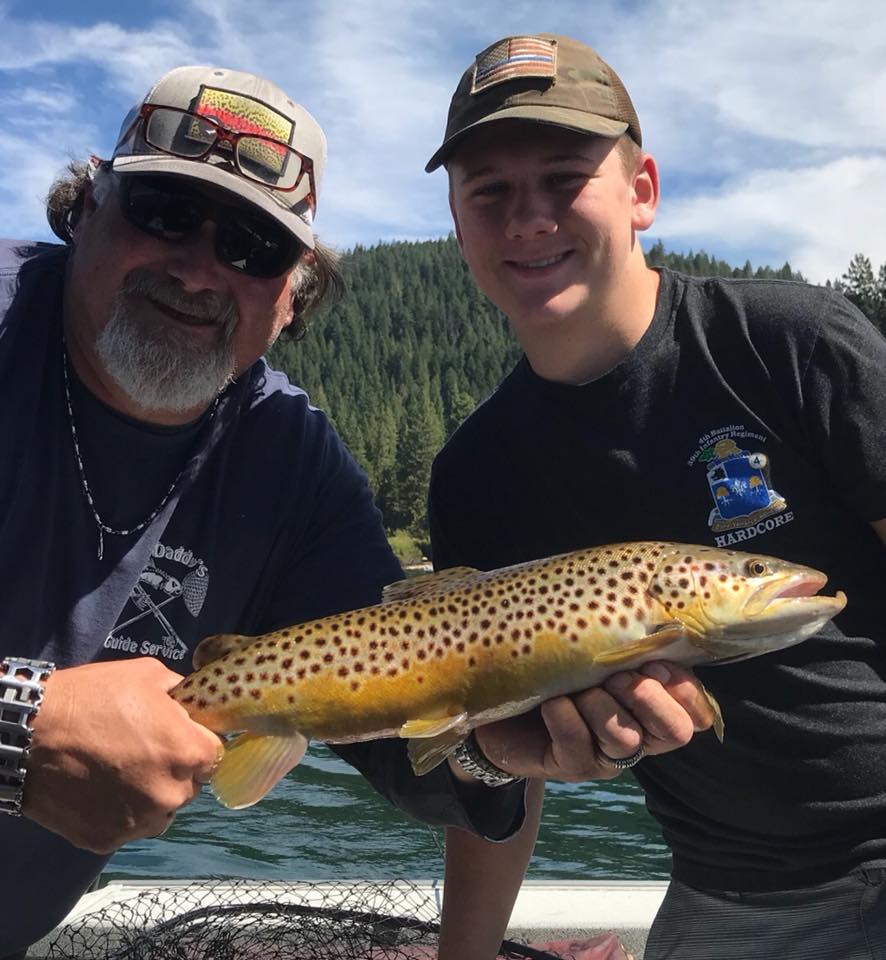 The bank was very steep and dotted with stumps. It reminded me of the big bluffs I like to fish at Lake Shasta. The sonar revealed that the bank fell quickly to the river channel that was under 90 to 130 feet of water.
Presently I started marking arches along the face of the bank about 25 feet down. I had a copper Speedy Shiner working 75 feet behind the kayak off my Scotty downrigger at 15 feet deep.
Moving quickly, I dropped the spoon down to 23 feet and was rewarded with an almost instant hook up. The rainbow put up a solid fight. As I fought the determined trout I had to keep peddling fast enough to maintain forward progress in order to keep the kayak straight.
When the beautiful rainbow boiled to the surface I lifted it aboard and measured it on my ruler. It was 15 inches long. I quickly let the trout go and got the Speedy Shiner back down into the strike zone.
Over the course of the next half hour I caught three more rainbows that ranged from 16 to 18.75 inches. I’ve been fishing French Meadows Reservoir for over 20 years.
I’ve caught a lot of rainbows at the lake but prior to my most recent trip I’d never caught one at the lake that topped 16 inches. The four wild rainbows I caught last Saturday were among the best I’ve seen come out of the lake. I would have like to have taken some photos of the trout, especially the 18 plus incher, but with the challenges created by the wind photography was off the menu! 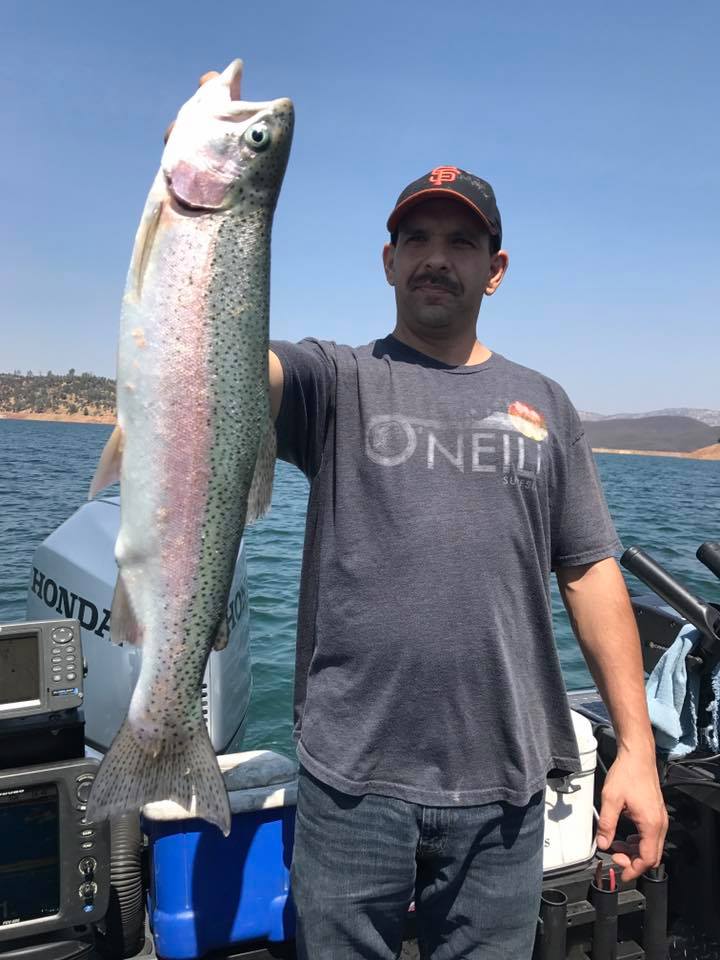 I’ve enjoyed some pretty good trout action at several different lakes over the past month or so and fall fishing hasn’t even kicked into gear yet. Water temperatures are just starting to come down at NorCal lakes and it won’t be long until trout fishing is absolutely fantastic!
During a typical fall, I spend a lot of time hunting and I plan on hunting deer and bears this fall, but not as much as I have in the past. My goal is to do more fishing this fall for a variety of species, but front and center among them will be trout. If you’re planning some trout fishing adventures this fall, but aren’t sure where to go, perhaps my plans will help inspire you!
At some point, I’m going to haul my kayak down to Lake Don Pedro. The reservoir has a robust rainbow population and fish topping 3 pounds are common.
Recently Captain Monte Smith of Gold Country Sportfishing has been putting his clients of some very nice rainbows at Don Pedro, but the fish are still deep with the best fish coming out of 80 to 90 feet of water.
As the surface temperature comes down, those rainbows are going to come up. I’m going to keep my finger on the pulse of this bite and hopefully will plan my visit when the trout are in the top 20.
In the more immediate future I’ll be fishing Lake Almanor and Eagle Lake with my wife Gena. Gena now has her own Hobie kayak and is anxious to get her trout on!
At both Almanor and Eagle the trout fishing is in transition from a summer to a fall pattern.
“The trout here are Almanor are averaging around 3 pounds and much bigger rainbows are possible,” reported Captain Bryan Roccucci of Big Daddy’s Guide Service. “Trout that had been feeding primarily on insects all summer are now starting to target pond smelt. As the pace of the feeding picks up, you’ll be able to successfully troll faster and faster and closer to the surface.”
At Eagle, the trout remain in the lake’s south basin, but they are feeding within 15 feet of the surface. There is still lots of feed available to the trout and the water clarity is off a bit, but the action is getting better almost daily with both worm soakers and trollers hooking rambunctious ‘bows that range up to 3 plus pounds.
I haven’t caught an Eagle Lake rainbow in quite some time, so I’m really looking forward to fishing the legendary north state trout factory.
Perhaps the culminating event of the fall for me will come in November. The Fish Sniffer’s Wes Ward and I have been planning a 4 day camping and kayaking trip to Lake Shasta. We are going to dump our kayaks into the lake at Jones Valley or Silverthorn and then spend our time targeting both trout and bass in the Pit and Squaw Creek Arms. We are hoping to stay on the move, camping in a new location every night.
I’m even planning on stashing my 12 gauge in the kayak just in case we stumble on some turkeys. I can tell you from firsthand experience, that turkey breast roasted over an open fire is pretty darn good!