Cartmen Saxe of Guerneville, California caught a sturgeon estimated to be 10 feet long and approximately 500 pounds on the Klamath River over Labor Day weekend.
It was September 2, 2018 when my dad, grandpa, and I went on a fishing trip on the Klamath River. We were about 5 miles up from the boat launch, a mile from the ocean.
We rode through rapids in our Lowe Jet Jon Boat and then stopped to fish on the shore. I walked upstream with my grandfather and he caught a small trout. Then, we went back to the boat and headed upstream again, fishing through the rapids. 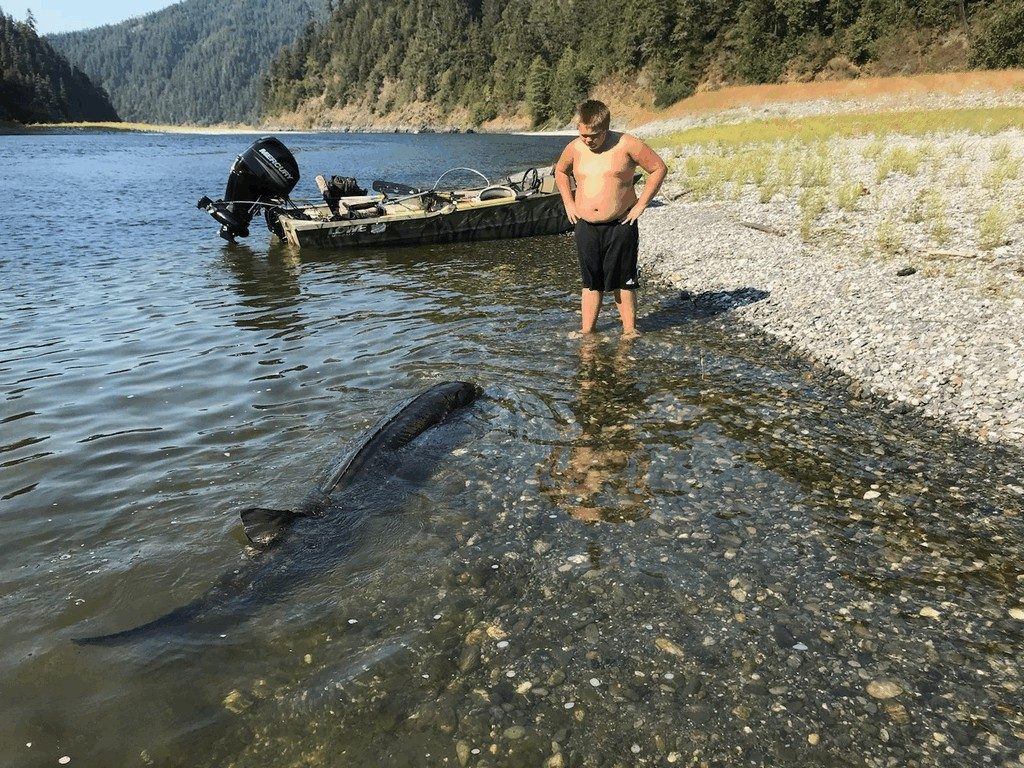 We drifted back down and stopped, putting the anchor out. We pitched out our roe baits and waited a good 40 minutes. And that’s when I hooked a BIG FISH.
I fought the fish for about 30 minutes, it made several runs and we were maneuvering the boat around to keep up with it.
The fish began to lay down in the deep water and I started to sweat. My arms were shaking from the fight.
I was using 30-pound test, braided line with a 25-pound test leader. I then turned my Okuma SST Salmon Spin (Medium High Action) 30-pound rated rod over to my dad because he didn’t want me to snap the pole. My dad fought the fish, reeling and pulling it to shore while my grandpa maneuvered the boat.
My dad then got the needle nose pliers out to release the fish and gave the rod to my grandpa. Suddenly the fish headed back out to deeper water.
My grandpa grabbed the rod and, while backing up the beach, he reeled and walked toward the fish. My dad got his phone out and took some pictures while the fish was close to shore, while grandpa kept a tight line to keep the fish nearby.
Dad got the pliers out again but then, the fish snapped the line at the hook. The fish then swam away to deeper water. My dad and I swam off down the river, enjoying our success.
The fish was a sturgeon estimated to be 10-feet long and weighing approximately 500 pounds. We were using a single barbless hook which hooked the fish in the mouth with a Glow Go, Little Corky, and roe combo, weighted with a pencil sinker.
The fish was never removed from the water and was released unharmed. We judged the 10-foot length when the fish was near the boat, its nose was near the steering wheel, and its tail was past the rear of the boat. That distance measured ten feet in length. We guessed the weight from a story about a similar fish that was found at Klamath Lake which was 10-feet long and estimated to weigh in at 500 pounds.

White sturgeon is a species of sturgeon native to the Eastern Pacific.
White Sturgeon are native to several large North American rivers that drain to the Pacific Ocean.
They primarily live in estuaries of large rivers, but migrate to spawn in freshwater, and travel long distances between river systems. Reproducing populations have been documented along the West Coast, from northern Mexico up to the Aleutian Island in Alaska.
The largest white sturgeon every measured was 20 feet long and weighed 1,799. That fish was thought to be over 100 years old.