“You should have been here yesterday.” Every fisherman has heard that tired out old trope. Every once in a while, we are lucky enough to have been there, “yesterday.” That was the case for me and some buds on a recent trip to the Lower Klamath River below Highway 96.
My BFF, JW, texted to tell me that the fishing was red hot. “We caught 15 fish in Blake’s Riffle this morning to 15 pounds.” A short while later another text jingled on my phone, “We’re done. We caught and released some more fish. Probably landed over 20. Lost count.” Fishing with JW was our mutual friend, Vance, from Western Nebraska. Vance had made the pilgrimage out to the Klamath, and his timing was impeccable. As is typical for Vance, he had caught the big fish of the day. There’s something about his mixing a cocktail at 9:00 a.m. and ensuing lackluster hooksets that adds up to lucking into the big fish of the day. 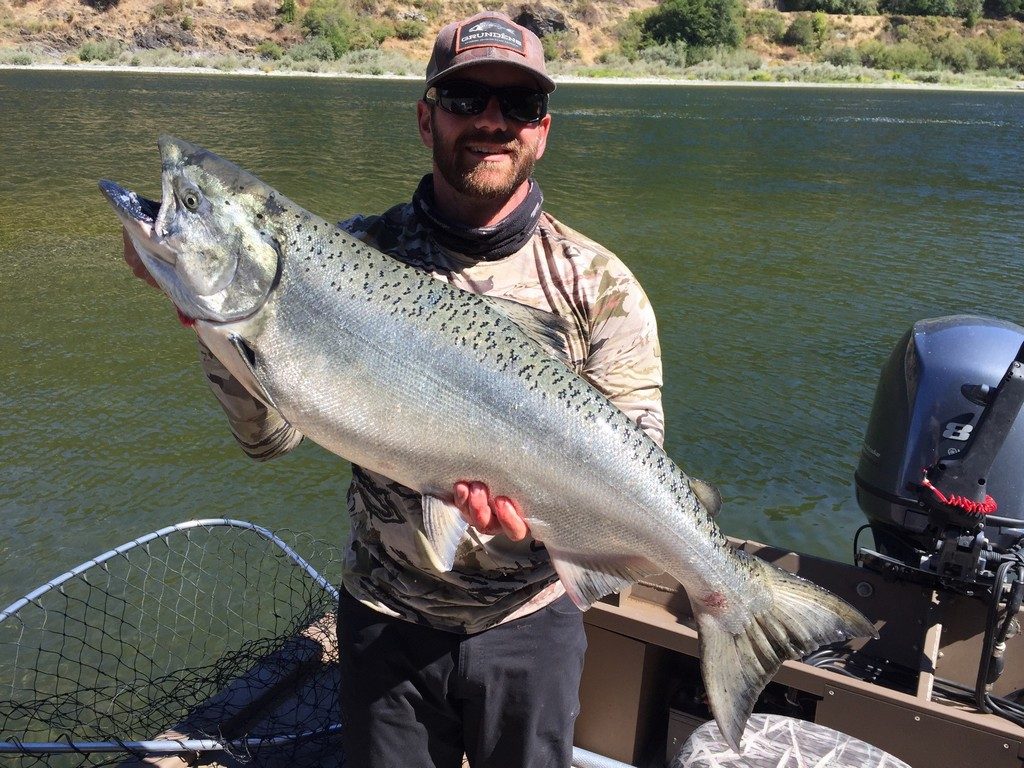 As good as the fishing report was, I wasn’t too excited. I’ve been lured to the siren’s song of the Klamath many times and found that the fishing had gone skunky. “Oh, the mouth sanded in yesterday,” or “the gillnetters have really been hitting it hard.” Those are the all too familiar clichés. This time would be different. My timing was perfect.
Captain JW motored us to Blake’s Riffle in grey light and joined a line of guide boats already working the spot. On my first drift, I hooked a 17” jack. I quickly landed and shook off the fish. Vance hooked another cookie cutter 17” jack. Every boat around us was also hooking up multiple fish per pass. This really didn’t excite me. I’ve caught a ton of these Klamath River micro jacks, and I would gladly trade 10 of them for one 15 pound adult. Be that as it may, the action was pretty much red hot. JW’s boat and every boat around us continued to hook fish on every pass. After we had caught a dozen or so fish, with maybe one of them achieving “adult” status over 22”, JW decided it was time for us to move on and hunt some bigger fish upstream.
Usually leaving fish to find fish is not a good idea. We hit a couple of proven spots on our way upriver. We didn’t find any fish. We continued working our way upriver until we hit a riffle near a creek mouth. JW hooked into a nicer fish. This one was a typical Klamath River adult in the 9 pound range. This one was worthy of tagging and putting on ice. We caught a few more jacks near the creek mouth, and then the action went dry.
Finally, we wound up in a deep run that had been producing over the last few days. There were two boats there working the spot, but they didn’t seem to be having much success. Once again, timing is everything on the Lower Klamath. Our first drift didn’t result in any fish, but our nickel sized clusters of roe would soon get eaten on the second drift.
One of the boats took off, which turned out to be a terrible decision. Unbeknown to us, a huge school of fish had just entered the hole. On our second pass, we hooked a double. Both fish were landed, and they were a very respectable grade of large jacks that were technically adults in the 24” range. 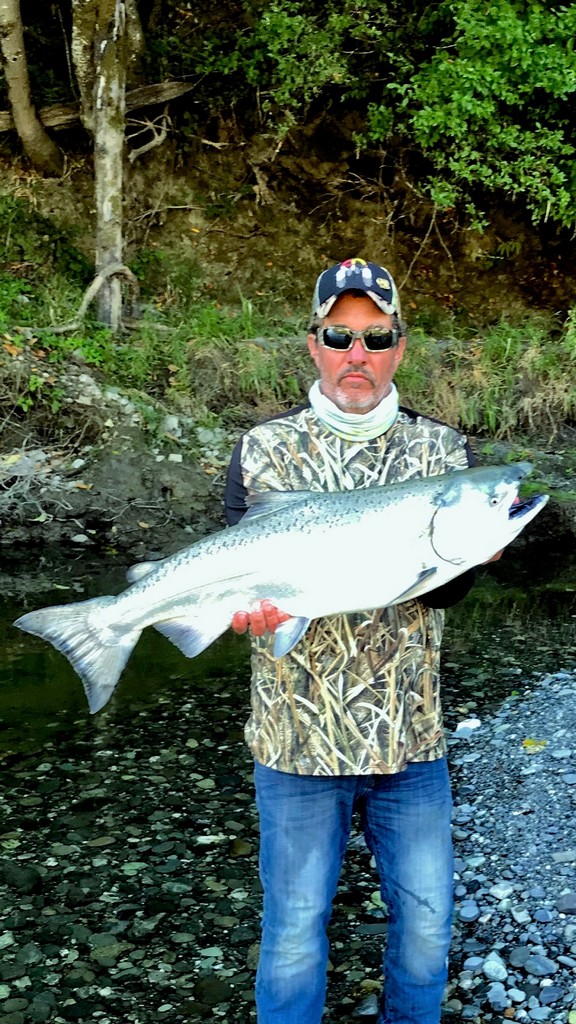 We released them, which turned out to be an excellent decision. For the next three hours we caught fish after fish on every pass. The grade of fish was very good with most in the 5-7 pound range and quite a few in the 8-10 pound range. We started keeping track, and we realized that our tally was up around 35+ fish for the day. Although it was impressive quantity wise, I was still a little put off by the lack of a real big fish. When we think of salmon, giant fish so heavy the angler has to bear hug them in the photo is what comes to mind. 5-8 pound fish are fun to pull on, but it’s the big ones that get my heart pounding. My wishes were about to come true when Vance hooked into a big fish. This fish just fought and fought, staying deep, bulldogging. When we finally caught a big chrome flash from the depths, we knew it was a good one. Another minute or so later, there was a fat 17 pound buck in the net. Vance’s trip was made. The bite continued until we ran out of roe. The day ended with around 40 salmon landed.
The following day was a great day of fishing, although it didn’t quite measure up to the previous day. We landed 15 fish, with the bulk of them being quality adults in the 8-10 pound range. I put the cherry on top with a fat 22 pound hen.
We caught all of our fish side drifting roe. Side drifting roe is the go to method on the Klamath. It allows many boats to work a hole and share the resource. One boat makes a drift while another boat motors to the top of the run. It’s kind of like waiting in line to ride a ride at an amusement park. Size 2 Octopus hooks tied on 12 pound leader are standard fare. A Fish Pill, Puff Ball or similar Styrofoam float is skewered through the hook to add flotation. Roe is cut in nickel sized pieces and cured bright red. Mad River Drifters are the preferred weighting system.
This year’s run on the Klamath looks to be phenomenal. Fishing has been great all the way since back in July when trollers found exceptional action in the estuary. The quota has been hit on the lower river below Highway 96. As of this writing, there is plenty of quota left from Highway 96 to Iron Gate Dam. Plus, there is plenty of quota remaining on the Trinity. Once the quota is hit, the retention of adult salmon is forbidden and only jacks under 22” may be retained.