When it comes to bagging stripers while using bait there is a broad range of rod and reel combinations that are capable of catching fish. Having said that, choosing the proper rod and teaming it with an appropriate reel will 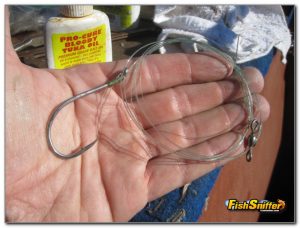 not only maximize your effectiveness in terms of hooking and landing fish, but it will also enhance the pleasure derived while slugging it out with a determined bass. In years gone by, striper tackle tended to be super stout. These days advancements in rods, reels and lines allow anglers to use light nimble tackle without sacrificing the ability to handle even the largest striper.
Conventional bait casting rods and reels are the way to go when fishing bait from a boat. A sensitive graphite rod that is between 7 and 8 feet long is ideal. The rod should feature a fast action, meaning that is should have a sensitive flexibly tip that quickly gives way to a powerful middle and butt section.
Your rod should be teamed with a level wind bait casting reel equipped with a smooth flawless drag and a bait clicker. A smooth drag is exceptionally important, since it is to a large extent your drag that allows you to wear down big hard charging bass with light tackle. A bait clicker is critical because the vast majority of the time when bait fishing you’ll be waiting for a bite with the reel out of gear. The bait clicker will prevent the wind and current from pulling line out of the reel, yet when a fish grabs the bait and runs it can do so while feeling little if any resistance.
Okay now that you’ve selected your rod, reel and line, it’s time to consider the nuts and bolts of bait fishing. I’m talking about end tackle. 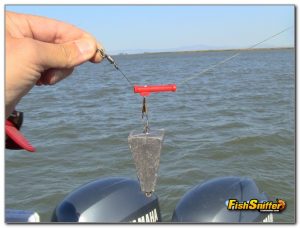 Effect delta bait anglers use sliding sinker rigs almost all the time. To rig up begin by passing your main line through the eyes of the rod. The next step is to slide a bead on the line, followed by a slido and a second bead. Finally tie on a snap swivel using a Palomar knot.
The bead above the slider will protect the top eye of the rod, should you reel the slido up to the tip during the heat of battle. The bead on the other side of the slido is intended to protect the knot from the slido when casting.
To construct a leader, get out a 9/0 octopus hook and cut off a 40 inch piece of your 25 pound test leader material. Using a bumper snell, also known as an egg loop snell, attach the hook to one end of the leader. Tie a one inch surgeon’s loop in the other end of the leader and snap it onto the snap swivel on the end of your main line.