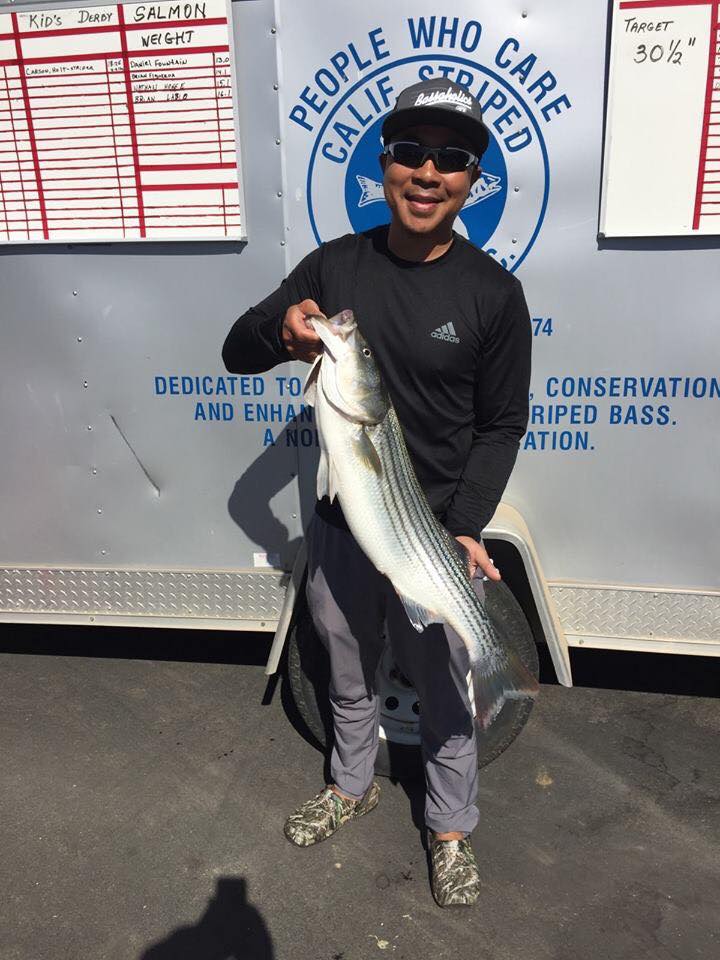 The 71st Rio Vista Bass Derby held on October 12, 13 and 14 drew 300 participants vying to catch the fish closest to the selected striped bass length of 30.5 inches and the sturgeon length of 53 inches.

Don Syengchanh came in second with his 29.90-inch striper weighing 12.4 pounds. He bagged his fish while using a jumbo minnow in False River.

Jim Francis of Concord, a longtime friend and fishing partner of the late Fish Sniffer publisher and founder Hal Bonslett, finished second with a sturgeon measuring 43.28 inches and weighing 23.8 pounds. He caught the fish on grass shrimp in Montezuma Slough.

The participants in the salmon division of the event competed for the largest fish weighed in. Brian Lazlo won first place in the salmon category  with a 16.1-pound Chinook.

In the youth division, Emiliano Martinez caught the biggest catfish, a 7-1/2 pound channel catfish, while bait fishing in Liberty Cut.

“Eighteen kids weighed in fish, including stripers, catfish and one salmon,” said Canevaro. “Every kid that weighed in a fish received a prize, topped by two bikes and $50 cash for the winning striped bass and catfish. The prizes also included gift certificates to Sportsman Warehouse, 10 rod and reel combos, 4 tackle boxes filled with tackle and two other Shakespeare  rod and reel and tackle packs.”

Members of the California Striped Bass Association, Isleton Chapter, measured and weighed the fish during the event. They also sponsored all of the kids’ prizes, except for two bicycles provided by Ace Hardware, Rio Vista, and a couple of rod and reel combos from Sportsman’s Warehouse.

After months of great striper  fishing on the Delta, the fishing was relatively slow, with only seven fish checked in during the three days. Likewise, sturgeon fishing was also tough with only two fish weighed and measured.

The sturgeon fishing has improved since the derby with better tides, with anglers hooking good numbers of sturgeon while using salmon roe and lamprey eel in the Pittsburg area.

While the weather was beautiful on Friday and Saturday, a strong northwest wind made boating and fishing difficult Sunday. Anglers weighed in more salmon, 11, than stripers or sturgeon, according to Canevaro.

The salmon fishing has really slowed down in the Isleton and Rio Vista areas since the derby.

“We landed one 10 lb. salmon and lost a bigger one while trolling Silvertron spinners from Light 37 to the Rio Vista Bridge on a recent trip,” stated Canevaro.

The First Bass Derby held in Rio Vista was in 1933. Since that time, the derby and festival has become one of the Delta’s most iconic and enduring events. For more information, contact the Rio Vista Chamber of Commerce, (707) 374-2700.