It feels kind of ridiculous, or at least out of place, to be writing about fishing when our hearts, minds and hands are so focused on the ongoing tragedy happening in Paradise, California and the surrounding area.
With the local Cascade Fire still fresh in our minds we are attuned to the instant devastation that fire and wind can wash over the foothills, even still it seems we are ill equipped to understand what is going on just 45 minutes drive north of us.
I am however, reminded of a clip I recently watched where bush pilot Trent Palmer suffered an engine failure in his KitFox, luckily managing to land in the middle of nowhere. After walking a ways he found some folks fishing a pond, where he was able to call for help. 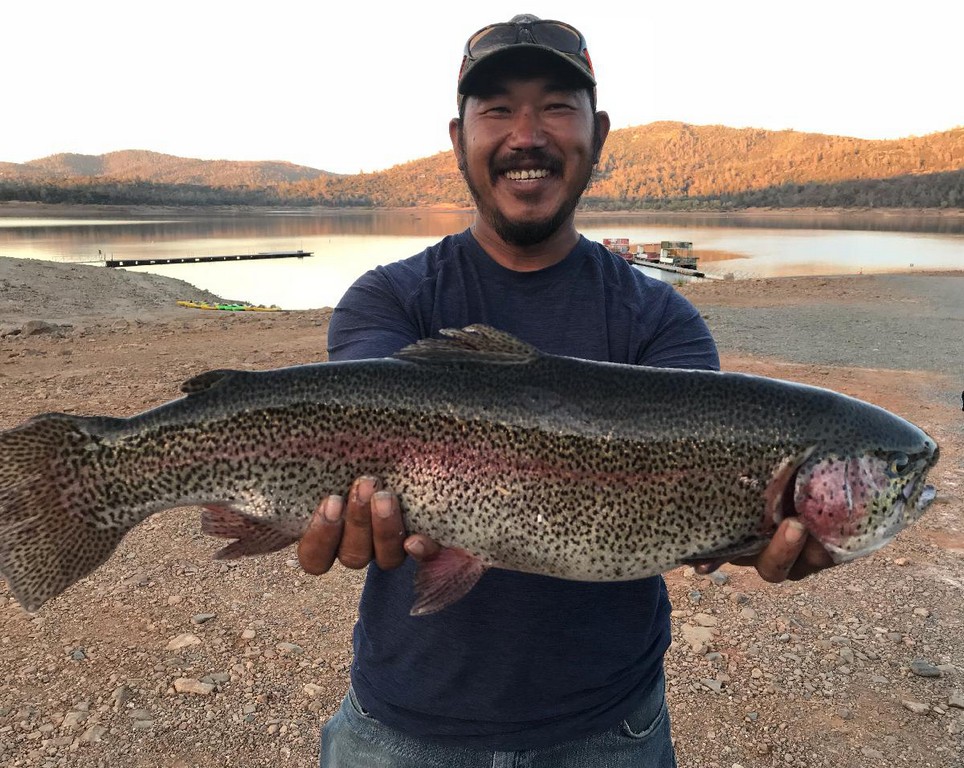 Help was hours away, what to do? The good folks at the pond tossed him an Ugly Stick and he caught (and released) bass while, unable to do anything else, he waited.
Fishing is good for the soul.
I am not at all suggesting that we shrug off the pain and anguish of the people around us but rather that sometimes the last thing they need is a line of people interrogating them about their trauma, about their loss, about their feelings. But meaningful support from a trusted friend or family member helps folks stay grounded. Recovery takes time.
If you are in crisis you might find yourself asking “what am I doing fishing”, often times under the shadow of guilt and confusion. The answer is simply catching your breath (and hopefully catching a fish!).
Give yourself grace and space to work through flashbacks and to process the state of things in your own time. If it’s not fishing, make time for the activities that would bring you joy even when you don’t feel like it. Take care of your soul.
In the midst of the unanswerable questions that disasters-of-nature stir up, being outdoors reminds me personally, that God is still creative. I don’t know if there’s a way to segue to a simple fishing report but I believe that cognizance of our neighbors and ourselves takes priority over a list of fish so I put the most important bit right here at the top.
But FYI, fishing November at Collins Lake is fantastic! 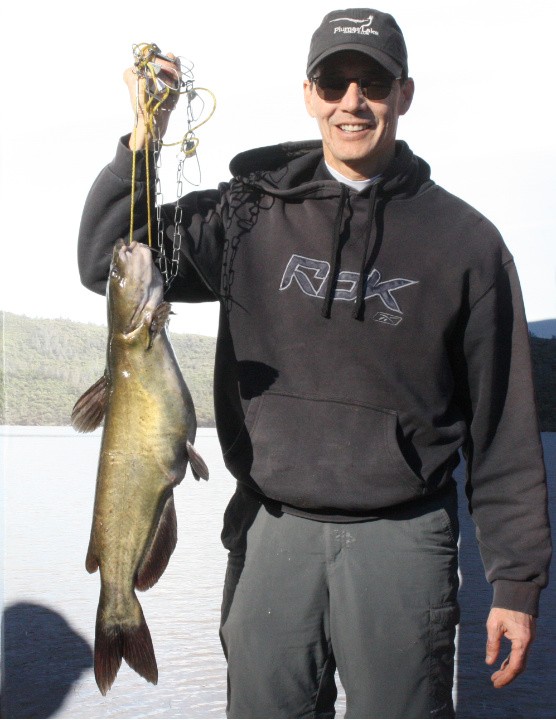 We’ve planted about 6000 pounds of trout since mid-October and we’re expecting another 2000 pounds before Thanksgiving.
Aniyah, Tisha, Sabrina & Fred Tinsley loaded up their cooler three days in a row trolling lures mid-lake and out by the dam. Their biggest this trip was a six and a quarter pound rainbow.
Kelton from Auburn caught his trolling as well but up by the powerlines. Daniel and David were trolling in only 5 ft. Bucking the trend, Rich and Chandler pulled four from the depths at 30 ft. But for the most part dragging in the shallows, like Ramon Cardenas or Sharon Palmer, has been the most productive.
Trolling aside we’re seeing lots of 5 and 6 pound trout caught along the shoreline. There has been a pattern of evening winds which can bring smoke up from the valley and stir up the shallows but as long as the wind is calm shore fishing is great! 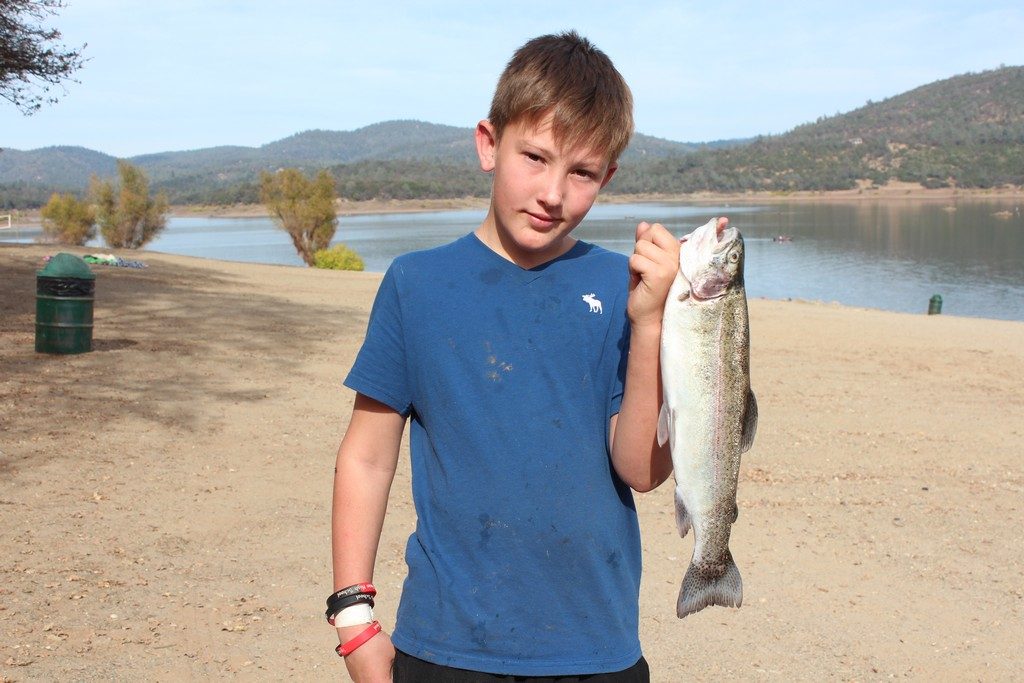 Carol Cabral caught a stringer from the shore on rainbow PowerBait. Tyler Durham from Roseville caught a 5.4 pound rainbow on white PowerBait in the Open Area. Few Chantavimol beat him by a just bit with a five-and-a-half pound trout caught off the dam with a rooster tail and Julie Montoya from Roseville joined the 5 pound+ club with a trout caught from shore at the South end on cheese PowerBait.
Greg Hellon from Marysville caught his 17 inch trout down by the rental docks on yellow PowerBait and Richard Blevens was proud to show off a limit that included a 6 pound fish. The Smith Family filled the rack, catching trout and a cat on worms and PowerDough right in front of camp #56a. And Tom Brown was dipping a plain jane Red Worm off the dam when he caught his 3 pound fish.
Now I have heard stories of a few people coming up skunked, mostly on windy days or trolling around 20 ft. When the lake “turns,” there is no thermocline to hold the trout at depth like there was in October. The lake has turned; So right into early December, on a clear calm day, you’re best off fishing from the shore or in the shallows, or at least look at a fish finder before you troll deeper.
But trout aren’t the only fish in the lake. The two biggest fish we’ve seen in recent days were catfish:
Dr. David Bradley got a surprise as he was dragging PowerBait in Elmer’s Cove with flimsy 4 pound test monofilament he managed to reel in a 9.7lb catfish. Bottom fishing the coves is a great way to find catfish, even if you’re not looking for them! Finally, topping the list Joshua Minas (right) caught a ten-pound catfish on a red worm right out in front of campsite #117.
So there’s the evidence; Trout are biting hard and catfish are patrolling the mud. After what I would call a slow October (in terms of fishing) seeing all these great catches feels a bit like a return to normalcy.
Of course our hearts and prayers are with those who are displaced and have suffered loss, especially as a result of the Camp Fire which destroyed most of Paradise and continues to burn up near Oroville. I hope that you who are affected most find some bit of normalcy wherever you can– and if that’s out on the lake, maybe we can help!