Food and Water Watch, Restore the Delta and concerned Bay-Delta residents will hold a protest at the office of Senator Dianne Feinstein in San Francisco on Thursday, December 6, at 11 a.m. to protest Feinstein’s Water Infrastructure Improvements for the Nation (WIIN) Act) Deal. This legislation, if passed by Congress and signed by the President, would funnel water to corporate agribusiness, harming the SF Bay-Delta environment, fisheries and communities.

Feinstein’s office is located on 1 Post Street #2450, San Francisco, CA 94104. Anglers and everybody concerned about the future of West Coast salmon, steelhead, striped bass, sturgeon, halibut, Dungeness crab and other fisheries is encouraged to attend.

“On November 30, Governor Brown endorsed a congressional rider that would extend of the drought-related, Water Infrastructure Improvements for the Nation (WIIN) Act,” according to a media advisory from Restore the Delta and Food and Water Watch. “This rider, attached to a must-pass spending bill, was proposed by House Majority Leader Kevin McCarthy and U.S. Senator Dianne Feinstein in a deal designed to increase water deliveries from the Delta to agribusiness in the San Joaquin Valley.”

“By endorsing the WIIN Act, Feinstein betrays the future of salmon, Delta environmental justice and legacy communities, the state’s water rights system, and Delta cities’ drinking water quality serving over a half million residents and businesses,” the groups say.

Action Alert from Restore the Delta

We cannot take our eyes off the ball. The time to act is now. Please take just five minutes each day to call Senator Feinstein’s to express your disapproval of the WIIN Act and the California WaterFix project.

“Hello, my name is ____, and I live in ______, CA. I am calling to express my disapproval the WIIN ACT that would weaken protections for endangered species and increase Delta water deliveries to the Central Valley, thereby subverting the objectives of the Bay-Delta Plan. I oppose the deal Senator Feinstein is cutting with Governor Brown and Majority House Leader, McCarthy. She said in 2016 the WIIN ACT was to help with the drought—now it is being used as a tool by the Brown Administration to increase flows permanently in the Delta in exchange for federal support of the Delta tunnels. Thank you.”

Below you will find the numbers to Senator Feinstein’s Federal and State offices. Please keep your messages polite and professional. We want to represent the Delta well.

You can also email her Water Policy staff member, John Watts, at John_Watts@feinstein.senate.gov. 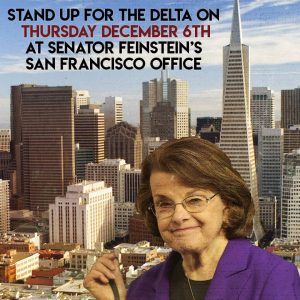