Any time you fish on the North Coast’s legendary Smith River, you have a chance of catching a new state record steelhead.

At 37 inches long with 24 1/2-inch girth, the fish would have been approximately, 28.66 pounds, beating the old record by over a pound, according to Galvan. The official state record steelhead of 27 pounds, 4 ounces was set on the Smith by Robert Hailey of Crescent City on December 22, 1976.

“Every year myself and my buddy go to the Smith in search of a trophy steelhead and four years later here we were,” he said. “As we made the 8-hour drive to Hiouchi, California, I was a little concerned because the water level was really low. it was at 8.3 feet and the best fishing there is at 10 feet, so the lack of rain really had me concerned.“ 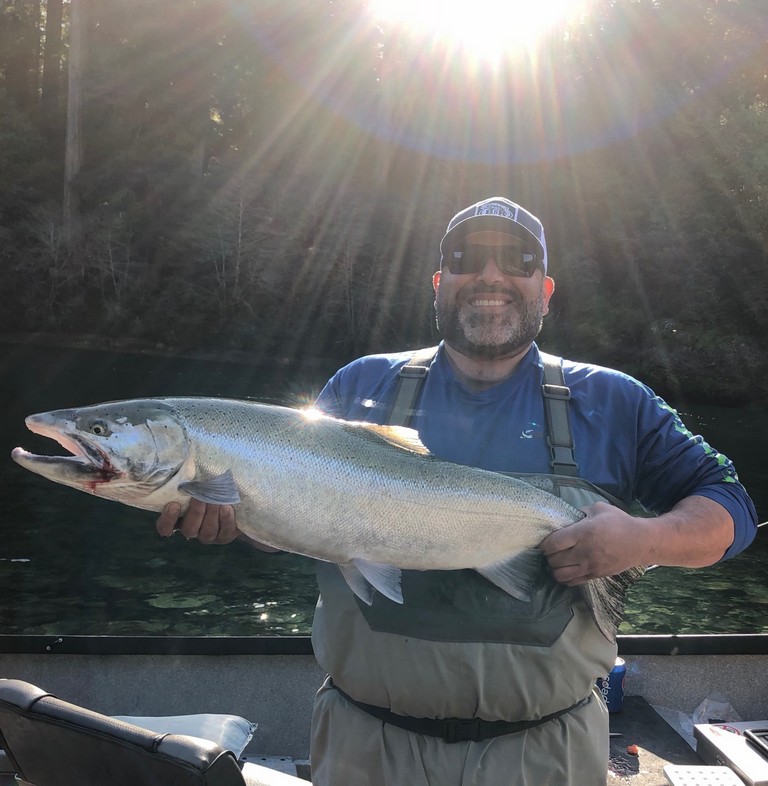 “As we woke up at 5:00 am with only 4 hours sleep the excitement was pouring out of me,” he explained. “As we drifted down the Smith from Jedediah Smith State Park to Ruby Park and seeing no real signs of fish, my excitement started to dwindle. Our guide Jim Mitchell decided we would head up river to the forks and make our way down river and try some plugs. He said maybe the fish need to see something different.”

“We were at the cable hole when we let out the plugs and decided to have lunch while we back trolled the plugs,” Galvan recounted. “I got about halfway done with my sandwich when my plug just got smashed by a steelie. I took the rod out of the pole holder and the fight was on. It drug us down to Jedediah Smith Park where we finally landed it – and what a beauty.”

“It was 37 inches long with a girth of 24.5 inches. I thought I lost the fish about 3 times, but luckily I managed to land this hog of a fish,” he stated.

Previous to catching this huge fish, the biggest steelhead he had ever caught was 12 pounds, caught on the Smith River also, in February 2016. In addition to the Smith, Galvan also fishes for steelhead on the Trinity and Smith rivers.

Kyle Murphy of the California Department of Fish and Wildlife noted that the CDFW has changed the state record requirements to allow anglers the opportunity to submit for a state record catch even if they don’t want to keep or kill the fish. For more information, go to: https://www.wildlife.ca.gov/Fishing/Records

The facts regarding the catch must be recorded on the California Inland Water Angling Record Verification Form (FG 737A). Forms are available on the CDFW website athttps://www.wildlife.ca.qov/Fishinq/Records. Record forms must be submitted within 30 days of catch.

As this publication went to press, a series of long-awaited storms had arrived. This is expected to drive good numbers of Chinook salmon up the Smith from the estuary. Behind them in December you can expect the river’s legendary steelhead to begin moving into the system.

For the latest information on the Smith River and other North Coast rivers subject to low information, call the CDFW 24 hour recorded message line at (707) 822-3164.

The Smith, located in the redwood region of the far northwest corner of California near the Oregon border, is known as the state’s most pristine coastal river. The legendary river produces huge steelhead and king salmon for anglers fishing from shore and boats every year.

Yet this gem is threatened by massive pesticide pollution from lily bulb farms in the river’s estuary. This estuary, along with other river estuaries up and down the coast, provides key habitat for juvenile salmon, steelhead and coastal cutthroat trout on their migration.

The Smith is the state’s last undammed and undiverted coastal river, but fishermen say pesticide pollution is killing salmon and impacting the fishing and recreational industry in this rural and economically depressed area.

In October, the North Coast Regional Water Quality Control Board announced that it was abandoning a seven-year long process to establish a permit for lily bulb cultivation in favor of a “purely voluntary program” for this Wild and Scenic River, according to the three groups.

“The Smith River salmon restoration potential is unparalleled,” stated Noah Oppenheim, PCFFA Executive Director. “Despite its outstanding upstream habitat quality, the Smith has the state’s heaviest pesticide use per acre directly adjacent to its estuary, with virtually no regulatory oversight.”

In contrast, California salmon fisheries are heavily regulated by the federal Pacific Fishery Management Council and California Department of Fish and Wildlife — and North Coast fisheries have been severely curtailed or closed in recent years. “It’s time for other industries that impact ours to clean up their act; our coexistence depends on it,” emphasized Oppenheim.

Oppenheim said at issue is roughly 2,000 acres of the Smith River’s estuary farm land that is used for lily bulb farming,

“Growers use nearly 300,000 lbs. of fumigants, herbicides and fungicides yearly in the estuary,” he stated. “The estuary is critical habitat for coho salmon, a threatened species. Residents and federal agencies have complained of health impacts, drinking water contamination, and impacts to salmon from unregulated pesticide use from farms for over 30 years. Recent studies have confirmed water contamination in the estuary.”

The petition by the three organizations claims that the Regional Board has failed to follow its own laws and policies by proposing a voluntary program. The Water Code and State Board policies require an enforceable permit for agricultural pollution that contains certain concrete features.

The groups say that recent tests detected 17 pesticides in the tributaries and ditches that feed the estuary, 10 instances of contamination of the aquatic life, and copper contamination up to 8 times the levels that are toxic to salmon.

“These are major violations of state and federal law,” said Regina Chichizola, a local policy coordinator for Institute for Fisheries Resources. “It would take very little regulation and action to stop the pesticides from entering the Smith River. Simple actions like stopping direct chemical runoff to creeks, not spraying in the rainy season, creating streamside buffers and restoring salmon habitat could protect public health and the economy on the state’s wildest river.”

“The water in Smith River belongs to all Californians,” said Nathaniel Kane, attorney for Environmental Law Foundation. “The Regional Board’s failure to regulate lily bulb farming violates laws intended to protect people and ecosystems from exactly this kind of contamination. We are petitioning today to demand the accountability and results that the law requires.”