As I sit here at my desk looking out the window, thinking about trout fishing the midday sky is dark and grey. The few battered and torn oak leaves that cling to the trees flap and flop damp and lifelessly as they are battered by slashes of wind and sheets of rain. Certainly it is a better day to be writing about trout fishing than actually doing it!
While the rain is keeping me confined to my office at this moment, rainy days are a cause for celebration here in California where drought is always a concern and winter rain translates to great spring and summer trout fishing.
With so many fine trout fisheries dotting the state, trout anglers have a huge menu of potential trout fishing destinations to choose from when winter gives way to spring
Speaking for myself, the list of trout lakes I MIGHT visit this spring is pretty long, but there are definitely some MUST visit lakes on the list too where I know the action will be outstanding. Let’s take a look at a handful of those. 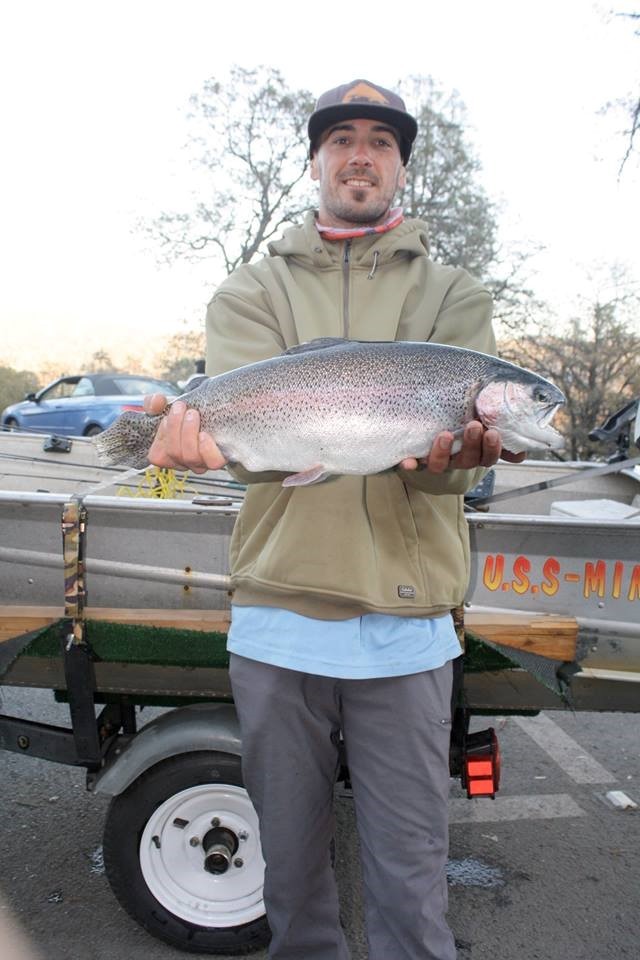 That’s a pretty bold statement, but it’s absolutely true. Lake Shasta is truly a magnificent fishery. It sets a high standard against which all other California Lakes are measured.
The lake is enormous in size, impounding water from the Sacramento, McCloud and Pit Rivers. The waters of the lake support a massive forage base in the forum of threadfin shad. The biomass of rainbow trout that reside in the lake, both in the form of planted and naturally spawned fish is staggering.
The average rainbow caught at Shasta ranges anywhere from 12 to 16 inches. Fish ranging up to 20 inches and 3 plus pounds are pretty common, but rainbows larger than that are a rare commodity. This means that fishing for rainbows at Shasta is more of a numbers game rather than a trophy hunt.
While you can catch rainbows at Shasta during any month of the year, the hottest part of the summer is actually my favorite time to fish the lake. From late June through September you can count on Shasta’s rainbow to be locked into the thermocline from 40 to 60 feet deep where they spend their time gorging on shad.
Attach a shad imitating spoon to a downrigger and drop it down amidst the balls of bait and pods of rainbows that dot the thermocline and you’ll enjoy hookup after hookup.
I remember one fine September day when legendary Lake Shasta guide Gary Miralles and I landed over 35 rainbows in the span of three hours. The trout hit so quickly we couldn’t keep three rods in the water.

French Meadows Reservoir is situated in a heavily timbered granite valley at 5,200 feet near the headwaters of the Middle Fork of the American River. The Sierra Nevada crest is a scant 9 miles distant.
The lake is fairly large boasting 1,900 surface acres and more than 8 miles of shoreline when at full capacity.
The nearest town to French Meadows is the hamlet of Foresthill, which sits east Auburn, California.
French Meadows has a strong population of wild brown trout that range up to and beyond 6 pounds. The lake is stocked with rainbows every spring and summer by the DFW. Most of these fish don’t survive, but those that do often times turn up in the catch one or more years later as handsome 12 to 22 inch square tailed holdovers.
The quality of a trout fishery is dictated in large part by the quality of forage it provides. Look beneath the surface of a great trout fishery and you’ll find a diverse and plentiful prey base. Minnows, crawfish, sculpins, juvenile trout, caddis flies and other invertebrates fuel French Meadows’ trout fishery. Minnows represent the lake’s primary forage, with crawfish running a strong second. Caddis hatches occur on most evenings from summer through early fall. On windless evenings the hatching caddis can provide fly anglers with good surface action.
French Meadows trout aren’t picky in terms of what they will strike. It’s one of those lakes where basic trolling and bait fishing tactics consistently produce quality fish. 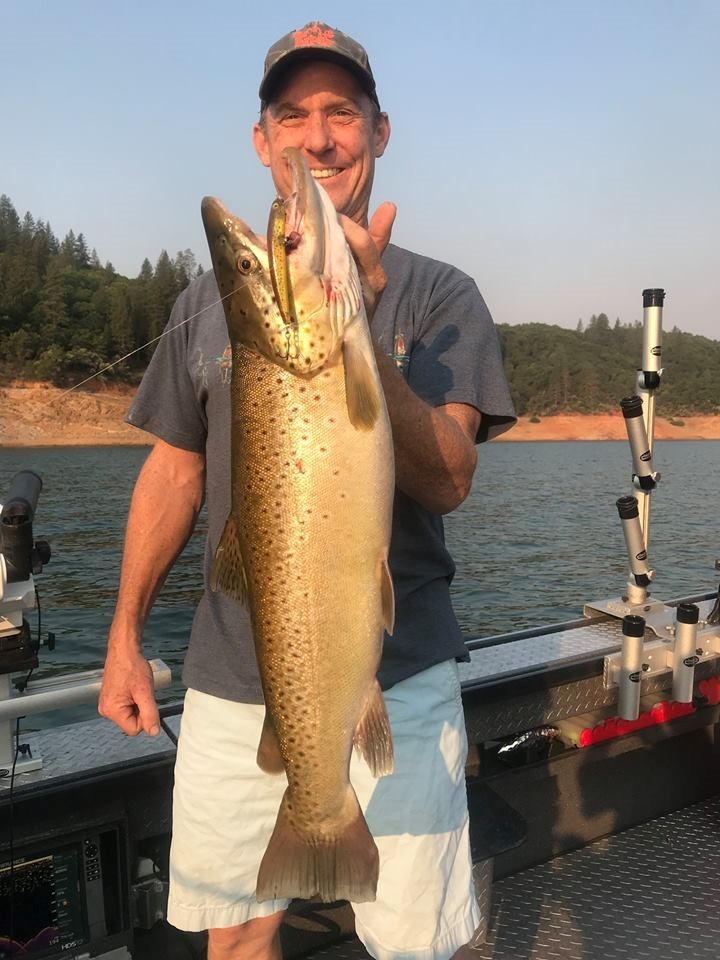 So what makes the diminutive 1,600 acre Collins Lake such an awesome trout fishery? Well there are a couple of driving factors behind the lake’s superb trout fishing. The lake’s rich waters provide an exceptional forage base in the form of prolific numbers of threadfin shad. Yet, the most important factor is the recreation area’s commitment to providing a top notch fishing experience.
Collins boasts the most aggressive trout stocking program in the north state. Spring and fall big numbers of rainbow trout are planted.
In addition to rainbows, the lake is home to a decent population of brown trout. The browns were planted as fingerlings several years ago in hopes that they would grow to trophy proportions. From time to time a lucky angler hooks a good size brown, but none of them have broken the 10 pound mark as of yet.
To catch a limit of handsome ‘bows at Collins Lake you don’t have to do anything fancy, basic tactics will work just fine.
When it comes to soaking bait off the bank at Collins worms work, but dough bait is king. PowerBait is the tried and true standard in color schemes like rainbow, yellow, chartreuse and orange.
During the hottest part of the summer, the trout action tends to shut down during the daylight hours, but fish are available early, late and after dark.
I’ve literally spent hundreds of hours trolling Collins Lake over the past decade and I’ve caught hundreds of trout on dozens of different offerings. I think that any standard trout trolling offering will take some trout some of the time at Collins, but based on my experience there are a pair of offerings that will hook trout almost all of the time. These are the Kastmaster and the Rapala.
If the trolling bite turns slow at Collins it’s time to slow down and either rig up with an earth tone colored Berkley Power Grub or a threaded crawler. You can team these baits with a small dodger, but overall, I prefer to run them naked without flashers or dodgers. 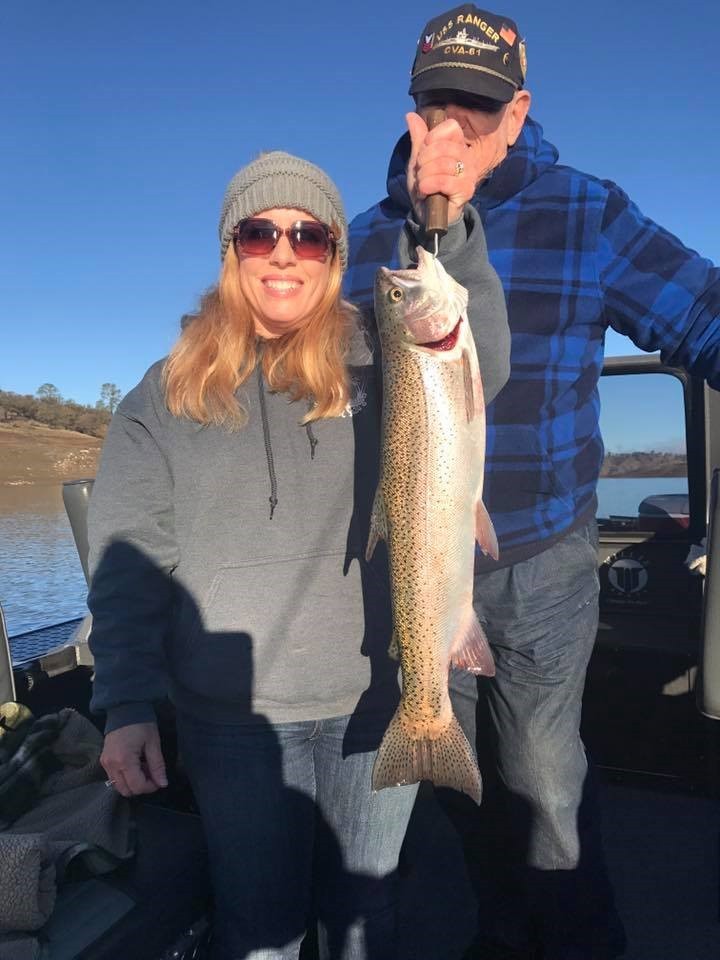 The excellent rainbow trout fishing at Lake Don Pedro, located on the Tuolumne River east of Modesto in the Sierra Nevada foothills, is one of the state’s best kept angling secrets.
Indeed, Don Pedro is one of the best overall fisheries in the state, featuring outstanding fishing for rainbow trout, king salmon, kokanee salmon, rainbow trout, as well as an occasional brown trout.
When Don Pedro’s kings and kokanee are biting the outstanding rainbow fishing that it offers takes a back seat, yet in my opinion, Don Pedro is second only to Shasta in terms of the numbers of rainbows it holds and their willingness to strike.
I recall one time a few years back while fishing a kokanee tournament at the lake when the rainbow bite was so intense that we had to abandon several coves simply because there were so many feeding rainbows in attendance that we couldn’t get our lures down to the deep swimming kokanee!
The average rainbow at Don Pedro runs about 14 inches and fish beyond 20 inches and 3 pounds show up consistently. Shad are the primary forage in the lake and this fact should be reflected in your lure selection.
Early and late in the day during summer, fast trolling with spoons such as Speedy Shiners and plugs like Rapalas works well. When the sun is at its apex it’s time to slow down and drop down, typically into the 40 to 60 foot range.
Wiggle hoochies and Apex Lures work well when trolled deep at 1 to 1.5 mph. These lures do a good job of imitating a wounded shad. For the ultimate in match the hatch effectiveness many anglers “roll” shad at Don Pedro.
Rolling shad simply refers to slow trolling frozen threadfin shad rigged on a special sliding snell that causes the minnow to roll seductively when drawn through the water.
When the rainbows play hard to get and refuse shad imitations a threaded worm either teamed with a flasher or small dodger is an offering that seldom fails at Don Pedro.