“That is a ridiculous looking presentation,” I thought to myself. “What stupid fish would eat such an atrocious looking concoction?” In my hand, I held a combination of a “Nightmare” (black wings with a red and white body) colored Spin N Glo, a rocket red Little Corky, bright red yarn with a nickel sized chunk of roe to really sweeten the offer.
The entire abomination was downright ugly, full of contrast, and likely to frighten any self-respecting steelhead in clearer conditions. However, I was on the Mad River, a stream known for its’ cloudy complexion.
The Mad is almost always off color in the winter time, but it was especially dirty on this trip. I like to be the first guy on the river fishing with bait after the river drops into shape following a big storm.
When everybody else is trying to floss the fish with twenty foot leaders, I’m the guy using a 2 foot leader with a big loud Spin N Glo for vibration. If you can put the bait and Spin N Glo right in the fish’s face, they will bite. The key is to fish slow and methodically. It’s almost like a modified plunking technique. 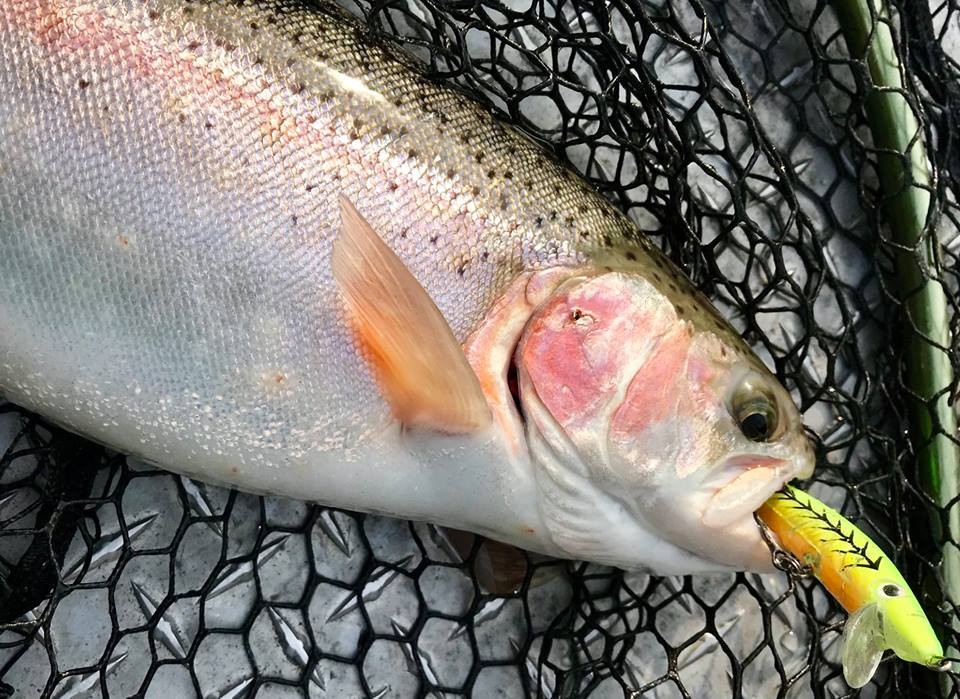 There are still certain rules that an enterprising steelhead angler should follow to maximize one’s success. For starters, you don’t want to fish on a rising river. I’ve had days that had inexplicable lacks of success, and at the end of the day checked the hydrograph to find that the river had a rise of a couple hundred cubic feet per second.
That might be an imperceptible rise to the human eye, but a steelhead must be able to sense it. When a river is rising, steelhead seem to have migration on their minds, and they don’t bite very well.
Of course, there are exceptions to every rule. I’ve also had some decent, note that I used the word “decent,” days of fishing on rising rivers. For the most part, you will want to fish on a dropping river. Dropping rivers get the fish to stop their migrations. They start holding in places that offer good resting and concealment potential.
Most steelhead fishermen would consider ideal conditions to be when a river goes from a muddy color to “steelhead green.” In other words, as the flood waters recede, the color will go from brown to a chalky green. That chalky green color is the signal to most anglers to get out to their favorite stream. However, you can get a jump on your competition by altering your presentation.
For example, the most common and most successful offering in the steelheading world is a dime sized cluster of roe fished in tandem with a Fish Pill or similar flotation device. This is the tool that allows guides to put bread on their tables. More steelhead have been duped by this combo than all other methods combined over the last ten or so years.
This presentation is ideal for clear water situation where it’s both innocuous and appetizing to your average steelhead. There comes a time where it’s completely inadequate, and you may as well be fishing with a bare hook. That’s when the water is dirty, and the river is “pushy.” I’ve heard many fisherman say, “The river is too high. It’s still a day or two out.” It’s that time where plunking is starting to peter out, and drift fishing isn’t quite happening yet. The river may have a foot of visibility at the most. This is when I’ve made my hay as a steelhead fisherman.
The biggest key is to make short casts close to the bank. These fish are still traveling close to the banks since the river is a little on the high side. I’m not plunking with a heavy pyramid sinker but instead making a very slow and methodical drift. 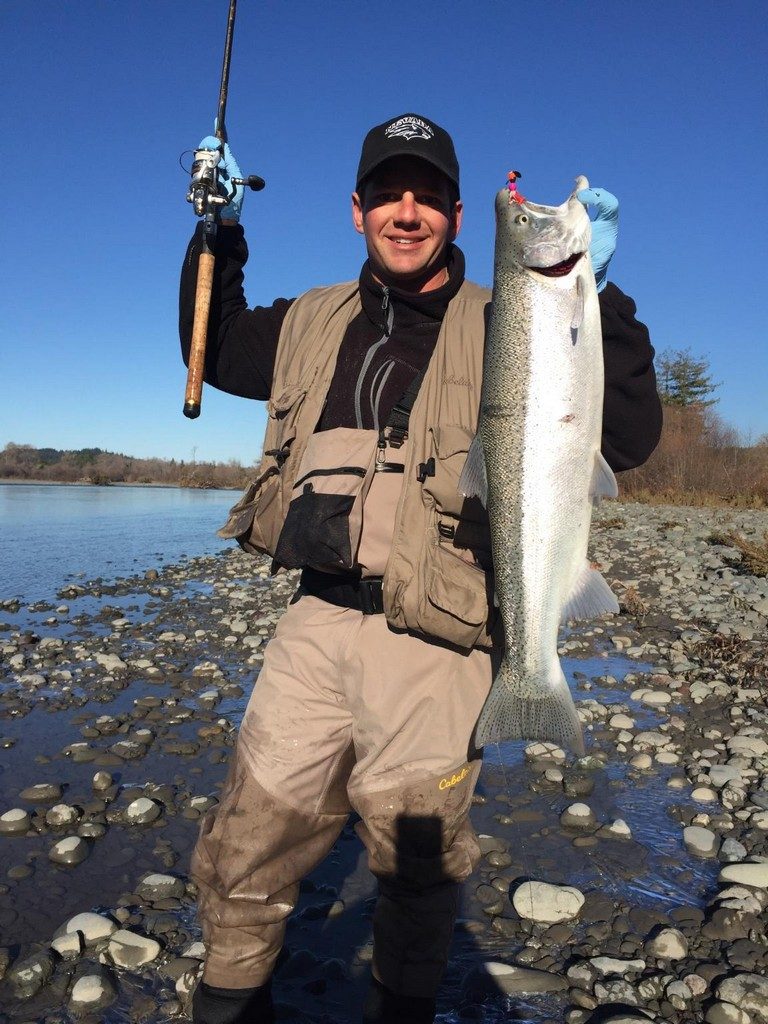 I like to fish my stuff a little on the heavy side. If you’re a steelhead fisherman, you can understand what I’m saying. When you should be using an 8 shot slinky, you instead use a 10 or 12 shot slinky so that you are hanging bottom a little more than you normally would want to be. It’s not a very natural presentation, but steelhead are dumb fish.
There, I said it. They aren’t exactly wild brown trout sipping size 22 mayfly spinners off the surface of a crystal clear spring creek. In fact, they can be one of the dumber fish that swims. It’s almost sacrilegious to call the grey ghost dumb, but they certainly can be.
I would argue that when steelhead get “smart” or “wary” it’s due to heavy angling pressure. When steelhead haven’t been pressured, they are really easy fish to catch. I’ve never seen a fish aside from brown trout that are surrounded with so much lore and supernatural powers as the steelhead.
In fact, they can be extremely aggressive and dumb fish that carry many of their saltwater feeding habits into freshwater. A good buddy and I have a theory that goes as follows: make a reasonable presentation to a fresh from the salt steely, and it will eat.
A few years ago, I would have never had the confidence to throw a big obtrusive combo like a Spin N Glo, Little Corky, yarn and bait at a steelhead. Since then I’ve caught a lot more steelhead, and I’ve caught them on a lot of different stuff.
I’ve caught them in Alaska, California and Idaho on both hatchery and wild rivers. Here’s a fact: If they can’t see your offering, you can’t catch them. So, if the water is dirty and visibility is limited, it makes sense to hang something in their face and let them get a good look at it. There’s absolutely no way that a steelhead is going to see a dime sized cluster of roe or a fly when visibility is in the 1-1.5 foot range.
Those techniques are great when conditions are in the classic 3-5 ft. of visibility range and the river is green to clear. When the river is dirty, you’ve got to give them something that makes a lot of vibration and has a lot of profile and contrast.
That’s why I go with a size 10 Spin N Glo and bait combo. Then I look for current seams and deep pockets along the bank. You can bet that steelhead will be in these kinds of spots when the water is a little on the high side. You don’t even really need your gear to be drifting as long as the wings on the Spin N Glo are spinning in the current. The fish will do the rest. The bite could be the lightest little “tap, tap” or it could be a very obvious tug.
A few seasons back I was on the Mad River. I had had such a good day that I actually ran out of bait about an hour before dark. The fish were still biting, and I only had killed one fish. I had caught many fish that day, but I was really hoping for a chrome hatchery hen to replenish my roe supply.
I had some bright pink Berkley Power Worms in my bag, and I decided, “why not?” I didn’t even bother re-rigging. I just added the worm in lieu of roe. It was hands down the most ridiculous looking presentation I’ve ever made: Spin N Glo, Corky, yarn and a bright pink 4” power worm.
With every cast, as the line would sail towards the opposite bank, I’d say to myself, “This is dumb.” I’d time it so that the sinker would hit the water right as I’d say, “dumb” in my mind. I seriously thought I was completely wasting my time.
As you might have guessed, I wouldn’t be writing about this unless I hooked a fish. I even surprised myself when the world’s dumbest steelhead decided to eat that ugly cocktail.