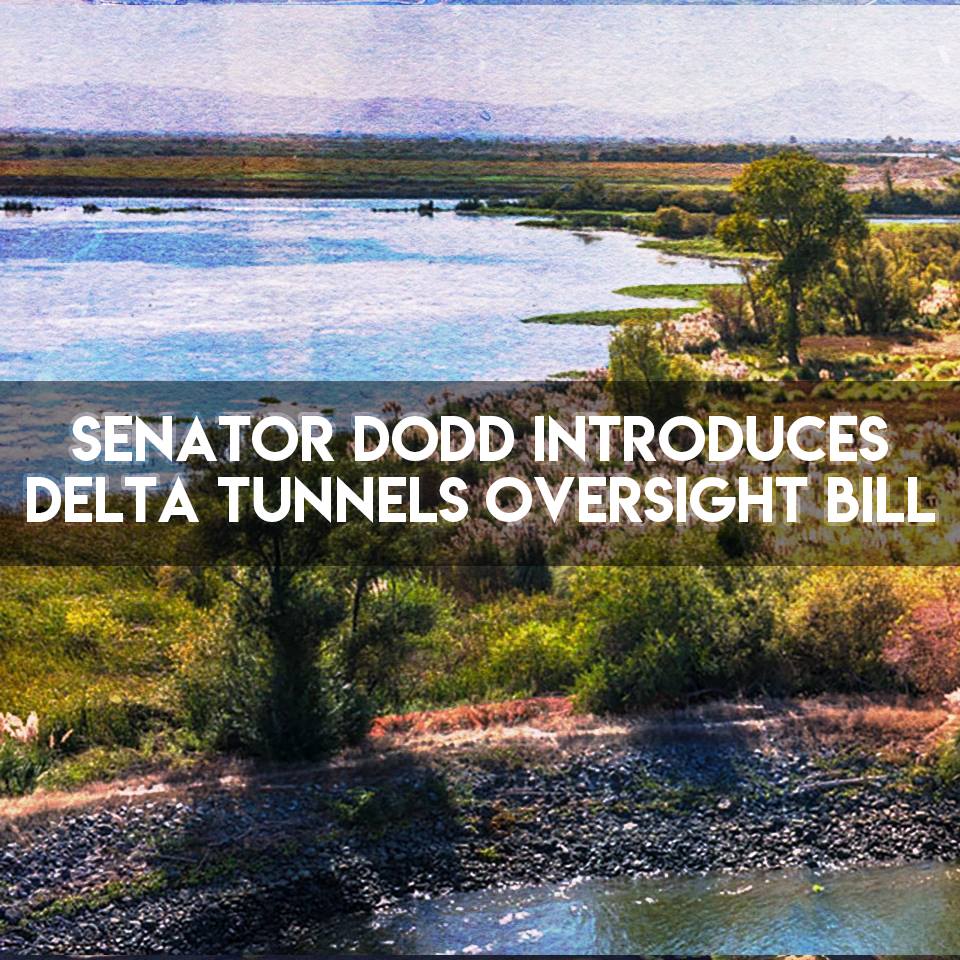 The bill was introduced as Delta advocates are criticizing the Department of Water Resources (DWR) and the Delta Conveyance Design and Construction Authority(DCA), a Joint Powers Authority (JPA), for approving contracts to move forward with project even though the required permits haven’t been obtained yet.

Senate Bill 204 would establish requirements for both DWR and the DCA to submit information about pending State Water Project contracts to the Legislature for public review, prior to those agencies moving forward with Delta Tunnels work, according to a statement from Senator Dodd’s Office.

The California WaterFix calls for the construction of two 30-mile long tunnels that would divert water from the Sacramento River, around the Delta, to the state and federal pumps in the South Delta for export to San Joaquin Valley agribusiness and Southern California water agencies.

“In years past, there has been too little opportunity for impacted communities to influence this flawed project, which will have a massive impact on the Delta’s environment, the local economy and drinking water quality,” said Senator Dodd, co-chair of the Legislative Delta Caucus. “This bill will gives the Legislature and Delta residents a place at the table to learn about what’s going on, express concerns and offer solutions that will serve Californians. We’re eager to begin a new chapter, where the voices of those who live in our Delta communities are adequately considered.”

The bill is supported by Delta advocates such as Restore the Delta and is co-authored by members of the Legislative Delta Caucus, including co-chair Assemblymember Jim Frazier, Assemblymembers Susan Eggman, Jim Cooper, Tim Grayson, Kevin McCarty, and Senators Cathleen Galgiani, Richard Pan, and Steve Glazer.

“Californians deserve to know the true financial and environmental impacts of WaterFix, the largest public works project in state history,” said Barbara Barrigan-Parrilla, executive director of Restore the Delta. “SB 204 will help make the planning process more transparent so members of the public can evaluate WaterFix for themselves.”

“This is a commonsense, good-government bill that increases accountability,” said Assemblymember Frazier, D-Discovery Bay. “Any large infrastructure project or major decision by a state agency should have legislative oversight. This is why people elect us.”

“To protect their interests. Hopefully, the foolish WaterFix proposal will never be allowed to move forward. It would be the most expensive project in the state’s history and we are still totally in the dark about what the true costs will be. But if it does move forward, this bill will provide another level of scrutiny by the Legislature,” said Frazier.

Senator Dodd introduced the bill at a critical time for the future of the Delta and West Coast fisheries.

Following the news that the Delta Conveyance Design and Construction Authority had selected the Jacobs company to be the engineering design manager for the Delta Tunnels, the DCA last week awarded Fugro a contract for a major geotechnical investigation to support the California WaterFix project.

The DCA has awarded the geotechnical investigation to Fugro and selected Jacobs as engineering design manager even though the State Water Resources Control Board has not yet approved the petitions by the Department of Water of Resources and U.S. Bureau of Reclamation to change the point of diversion, a requirement for the project to be constructed. The project needs over a dozen permits in order for construction to begin. For more information, go to: https://fishsniffer.com/index.php/2019/01/29/fugro-awarded-geotechnical-investigation-for-delta-tunnels-even-though-project-not-yet-approved/

The awarding of contracts to Fugro and Jacobs by the DCA also takes place despite an avalanche of lawsuits by cities, counties, water districts, Tribes, fishing groups, environmental NGOs and other organizations against a project opponents consider to be the most environmentally destructive public works project in California history.

Yesterday, Barrigan-Parrilla spoke at the DCA Board of Directors meeting in Sacramento to remind them that the joint powers authority may not initiate construction of a new Delta conveyance facility under certain conditions are met under state law:

“Today, I would like to remind the DCDCA of Water Code 850589 — provision b Construction of a new Delta conveyance facility shall not be initiated until the joint powers authority representing those entities have made arrangements or entered into contracts to pay for both of the following:  (b) Full mitigation of property tax or assessments levied by local governments or special districts for land used in the construction, location, mitigation, or operation of new Delta conveyance facilities.

This has not been completed, and speaks to a broader issue — dozens of permits and processes legally required remain incomplete — yet this body is approving contracts in the tens of millions of dollars to move forward with the project.  And we still do not have a fully flesched financial plan for the tunnels.”

She also brought to light reports about meetings between JPA members and “select” members of the Delta community regarding the California WaterFix that weren’t publicly noticed:

“I also want to remind the DCDCA that Delta County supervisors, assemblymembers, state senators, local district officials and mayors represent the people of the Delta.  We are very concerned hearing about meeetings betweeen JPA members and “select” members of the Delta community to work through issues regarding WaterFix.

Elected officials represent the people of the Delta. Period. Even our organization with 60,000 followers does not represent the local government interests of the Delta.  We understand that past meetings have ocurred — a dinner here, a meeting there.  We expect to see minutes from community meetings and for proper public notice of such meetings before they are held.”

Finally, she pointed out that the video for the JPA meetings is “regularly intermittent.” She urged the board to provide video services for all meetings and create a video archive:

“Last, video for this meeting is regularly intermittent — there is no video archive.  There are no video services for the DCFA meetings. WaterFix it the second largest public works project in CA. There are good government groups from throughout the state that want to understand what it is you are doing. If WaterFix is as good as all of you claim it is, then you should want meetings to be transparent.

It’s time for you to take a page out of the High-Speed Rail playbook and to provide video services for all meetings and create a video archive.  The people of California have a right to know what it is you are planning, the impacts on water supplies, the environment, and finances.”