One of the appeals of fishing is the virtue of optimism it breeds. We are always just one bite away from turning a slow day into the trip of a lifetime. This gift of hopefulness keeps us coming back again and again, while non-anglers abandon fishing as being “too boring”.
A trophy brown trout was the furthest thing from my mind when I journeyed to Lake Camanche on the afternoon of January 19. The purpose of the trip was to test some equipment maintenance I had recently made to the boat and trailer. For a typical fishing trip, I launch the boat before dawn. Instead, my son Adam and I meandered through the gold country foothills in the lazy haze of the afternoon sunshine.
The available sunlight afforded us the opportunity to take in the sights, such as scattered herds of cattle grazing upon the lush green countryside. Lake Camanche is nestled in the rolling foothills between the towns of Ione and Valley Springs in Northern California. 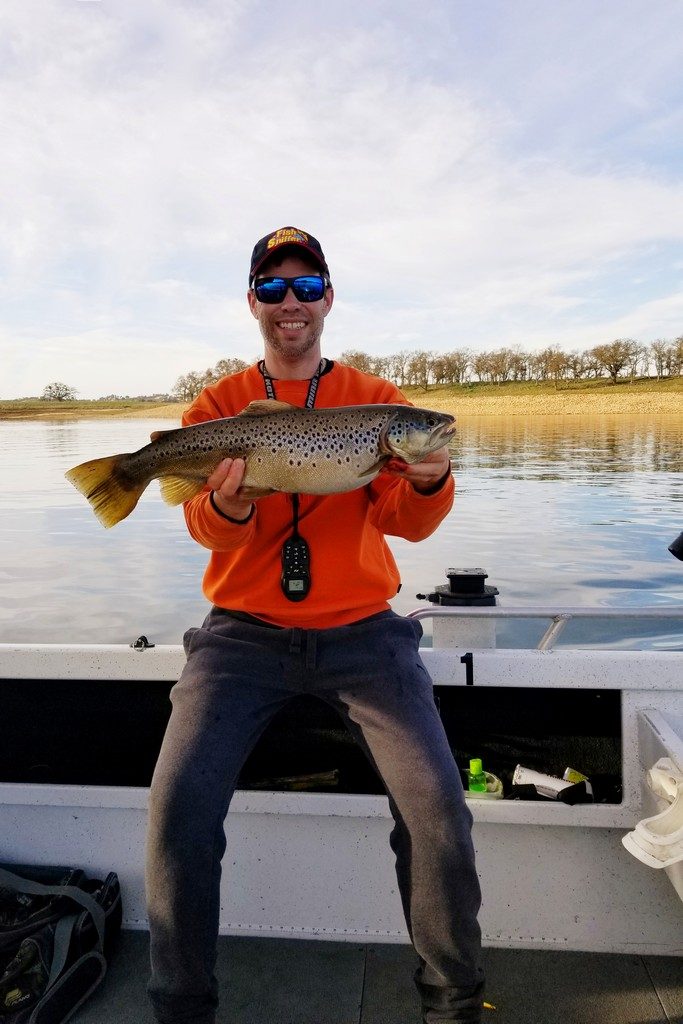 The lake sustains a solid holdover population of rainbow trout, in addition to the 60,000 pounds of trout they plant annually between October and May. For our trip, I was looking forward to picking up a few planted rainbows. The rainbows planted by the Mt. Lassen Trout Farm provide deep orange fillets, which make for great table fare.
As Adam and I pulled away from the ramp, an eager flock of white pelicans paddled over for a closer look. We quickly left them behind as I cut a wake away from the ramp at full throttle.
We started fishing by trolling two rods on downriggers and two rods on side planers. I had spoken to Robbie Dunham of Koke Machine Guide Service the previous evening, as Robbie is a local expert on the lake. Robbie suggested trolling in the narrows, as he had been having good success with clients in that area.
The first hour passed without as much as a bump, and I thought that the ‘supermoon’ we were experiencing might be contributing to the slow action. Be it the moon, or some other factor, something was keeping the fish off our lines. Just then, the downrigger rod set at 8 feet deep popped out of the clip and started pumping.
Adam started reeling, but the fish had come off. I quickly set the second downrigger to 11 feet deep, thinking that maybe the fish had pushed deeper. We immediately picked up a small holdover rainbow on the deeper rod, which was quickly released.
The surface water temperature was reading at 55 degrees, which is fairly warm for the wintertime. With this in mind, I decided to kick up our speed, thinking that it was time to change the game plan. I edged our speed from 1.6 miles-per-hour up to 2.6 miles-per-hour. We switched the lures on the side planers to Rapala floating minnows. The “Hot Steel” color F9 Rapala floating minnow is an all-time Lake Camanche classic, so I put one out on the starboard rod.
At this point, we started trolling back towards the ramp to go home. It was one of those slow days, where you are hoping for that one good bite to salvage the trip. As we passed by an area known as Horse Island, I edged my starboard side planer closer to the rocky shoreline. I was staring out into space…when…BZZZ-ZZZ-ZZZ.
I jolted to attention when I realized that the clicker on the “Hot Steel” side-planer rod was screaming. The rod was doubled over, and line was peeling off the reel. Adam grabbed the net, but the fish was still several hundred feet behind the boat.
The fish was not fighting like a typical rainbow trout. In fact, I wondered if the fish had become entangled in some weeds, another line, or become somehow foul hooked. It was coming in like a catfish, lots of dead weight and staying deep. After several intense minutes, we finally got our first glimpse of the fish. It was indeed was a big trout.
Just then, the trout leaped out of the water, and I could see that it was not a rainbow, but instead a large brown trout! I’ve never explicitly targeted brown trout, but I have incidentally picked up a few while trolling for other species. Adam quickly netted the fish, and we pulled it into the boat for a closer look.
I told Adam that this was rare, as only a handful of browns are landed at Camanche in comparison to the plentiful rainbow trout. I’ve always speculated that either they spill over form Pardee Lake, or they are remnants of some past planting program at Lake Camanche itself.
This particular fish had better coloration than any other brown I have landed, with deep golden fins and large pronounced spots along the sides. I quickly weighed the fish and got it back into the water for the release. At 4.5 pounds, it was truly a trophy brown, especially by Lake Camanche standards.
As the fish sway off, we continued our trek back towards the launching ramp. We lost yet another fish on the downrigger rod, and picked up another holdover rainbow just short of the north shore boat ramp.
Sunlight was fading as we motored up the hill away from the glistening lake. Adam spotted a large gray farm cat standing watch over a still grassy field. The quiet farmlands transformed into streetlights and strip malls as our path brought us closer to home. Despite the slow fishing action, that one bite had made the trip a memorable one. We will be back out there at some point. I know there are bigger browns out there waiting.