The NorCal Trout Anglers Challenge (NTAC) tour began the 2019 season on Saturday, February 2 with anglers braving cold and rain to catch lots of quality rainbow trout at San Pablo Reservoir in El Sobrante.
“This event was amazing,” said Vince Harris president of Angler’s Press Outdoors, the organization that created the NTAC series. “Despite cold, and rainy weather, over 100 trout anglers came out for this 7th year opening day event.”
The event, presented by Gone Fishin’ Marine and Lasher Elk Grove Ram and hosted by Angler’s Press Outdoors and the Fish Sniffer magazine, took place during the opening weekend of fishing season on the East Bay Municipal Utility District reservoir, nestled in the forested and verdant green East Bay hills.
“We are overwhelmed and very thankful for the support we have received from both our sponsoring partners and participants, and it is clear that this series is helping to bring individuals, families and youth together – in one place, to enjoy a great day of outdoor fun,” said Harris.
Jeff Garcia won first place in the event by landing a 5.04 lb. rainbow trout while shore fishing.
“I hooked the fish while using PowerBait off Oak Point,” said Garcia. “It was a matter of a lucky cast and lucky timing. I didn’t get on the lake until around 8 a.m.”
“I lost one larger fish that almost took my rod into the water. I also landed another smaller trout,” he noted.
Dirk Ensweiller finished third with a 4.39 lb. rainbow, while David Cohn placed third with a 3.82 trout. 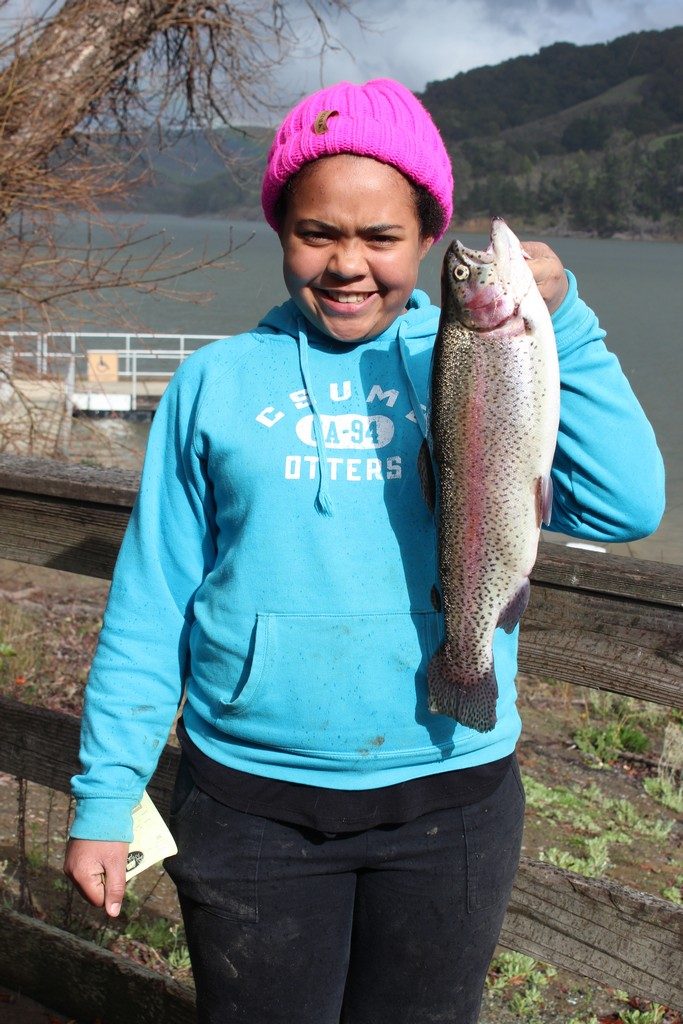 The fourth through tenth place winners were (4) Jason Pandolfi, 2.5; (5) John McGill, 2.3; (6) Chris Nunes, 2.27; (7) Mike Urbani, 2.21; (8) Jay Huey, 2.12; (9) Dan Quick, 2.11; and (10) Adam Hoffield, 2.06.
Solei Richardson of Richmond won first place in the Youth Division by catching a 3.89 lb. rainbow while shore fishing with garlic PowerBait. She was fishing with her dad, Michael, when she hooked the fish.
The second through sixth place winners were (2) Travis Luna, 1.7; (3) Winston Hubert, 1.36; (4) Angel Blanco, 1.32; (5) Brianna Gutierrez; 1.32; and (6) Harley Levin, 1.23 .
The fishing success varied, depending on the angler and the area fish. Some anglers landed limits, others landed one or two fish, and some anglers reported getting skunked.
Therese Carter of Sacramento won a Yakima Rooster Tail tackle pack and $100 in cash for using a Rooster Tail spinner.
Mt. Lassen planted 4,000 pounds of rainbow trout in San Pablo before the opener on January 29, according to Marcella Shoemaker at the Rocky Mountain Recreation Company.
San Pablo Reservoir is stocked regularly with rainbow trout in the fall, winter and spring and channel catfish during the summer. Largemouth and spotted bass, crappie, redear sunfish, bluegill and even a sleeper population of white sturgeon are available also.
The lake is best known for the trophy trout it has produced over the years. Stephen D. caught the lake record rainbow trout of 21 pounds, 12.8 ounces on April 18, 2001 while soaking chartreuse Power Bait off Oak Point.
While trout are the most popular species at San Pablo Reservoir, the lake also has good populations of channel catfish, spotted bass, largemouth bass and sunfish.
Most of the cats taken at San Pablo are in the 1-1/2 to 5 lb. range, but monster cats roam the lake’s waters. Mario Nova set the lake record with a 40 lb. 4 oz. catfish caught on June 18, 2016. He caught the fish on 6 lb. test and released it back into the lake.
That fish eclipsed the previous lake record set by Dave Edwards of Vallejo on March 23, 1995 when he nailed a 31 lb. 4.8 oz. channel catfish while using an anchovy off Oak Point
In recent years, the hard-fighting spotted bass has become more common in the catches at San Pablo, making the reservoir the only one in the Bay Area with a population of “spots.” The spotted bass lake record is 5 pounds, 9.36 ounces. 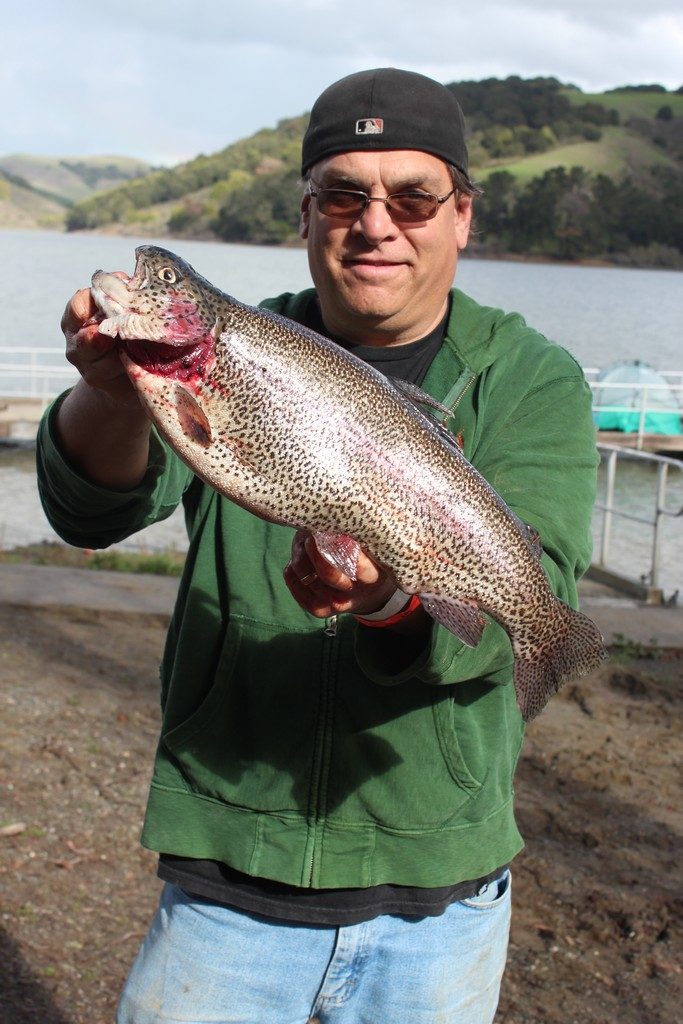 The reservoir’s big Florida-strain largemouths also make it a popular target of a hard-core group of big bass devotees. Anglers fish an array of methods, such as tossing spinnerbaits, split shotting with plastic worms, drop shotting with plastics and tossing out rainbow trout pattern swimbaits.
However, it was a trout angler, Victor Barfield, who caught the lake record 18 lb. 11.2 oz., largemouth on March 22, 2001 while fishing a nightcrawler and Power Bait in Scow Canyon.
Crappie, redear sunfish, and bluegill offer good fishing in the spring and summer for anglers using an array of small baits and lures. The redear sunfish record is 3 pounds, 6.4 ounces, while the lake crappie record stands at 3 pounds, 3.2 ounces
The lake also hosts a sleeper population of white sturgeon that are occasionally caught by anglers bait fishing for trout and catfish.
For example, Greg Peterson caught and released a 62-inch sturgeon on Power Bait and 4 lb. test line at the Pines on July 11, 2013. Carl Moyer and Dick Thomson also caught and released a 5-foot sturgeon while fishing by the boat ramp on September 2, 2016.
Nai Saephan of San Pablo landed the lake record diamondback of 105 pounds while soaking frozen shrimp on June 13, 2003.
San Pablo features 866 surface acres and 14 miles of shoreline that offers anglers their choice of fishing from boats, both private and rentals, or from shore. Since San Pablo is a drinking water reservoir, swimming, wading, and other body-contact activities are prohibited.
The San Pablo Reservoir Recreation Area offers many exciting outdoor activities including fishing, boating, picnicking, kayaking and hiking. The reservoir is located off San Pablo Dam Road between Orinda and El Sobrante.
For more information, contact: Rocky Mountain Recreation Company, San Pablo Reservoir, 7301 San Pablo Dam Road, El Sobrante, Ca. 94803, 510-223-1661, http://www.rockymountainrec.com/lakes/san-pablo-reservoir.htm
For more information on the NorCal Trout Anglers Challenge, contact: www.anglerspress.com or call 916-768-0938.
Tour Sponsors: If you’ve ever attended a NorCal Trout Anglers Challenge event in the past, you know that a lot of tackle and bait is given away, courtesy of the event’s sponsors.
Gone Fishin’ Marine of Dixon has come forward as a major NTAC sponsor again this year and will have a strong presence at tour events. Lasher Elk Grove Ram is also a major sponsor.
Thomas Lures, Silver Horde, Yo-Zuri, Mack’s Lure/Shasta Tackle, Hot Spot/Apex, Rapala, Luhr Jensen, Pro-Cure and Dick Nite Spoons will be providing an array of lures, dodgers, scents and more.
Yakima Bait has jumped into the fray once again and is providing all manner of baits including the tried and true Rooster Tail and Flatfish that have been catching trout for decades.
Berkley is providing line, bait and more.
Pro-Cure Bait Scents is also a part of the NTAC team in 2019, so you’ll be seeing Super Gel and other products at events this season.
The team at Fisherman’s Warehouse is on board as an NTAC sponsor this year.
Finally, Daiwa is sponsoring the 2019 NTAC Daiwa Angler of the Year Award.