I headed to New Melones to film for my new series on YouTube called “The Fishing Lifestyle”.
I arrived at the lake around 8:30 am. With coffee in my hand I immediately begin rigging my 21 ft Bass Cat with GoPro cameras. I slid the boat into the water at approximately 9:00 am. I fired up my 225 horse power Mercury and immediately turned on my Hummingbird Helix 10 to gather information on water conditions.
The water temperature was around 52 degrees and eventually rose to 55 degrees by the end of the day.
The first location I hit was a main point up river. I began filming Matthew (tfl_matt) and Daniel (tfl.daniel), they started the day throwing a drop shot and Neko Rig which yielded little success.
I continued filming with them for about 45 minutes and then decided to run to a fresh location. 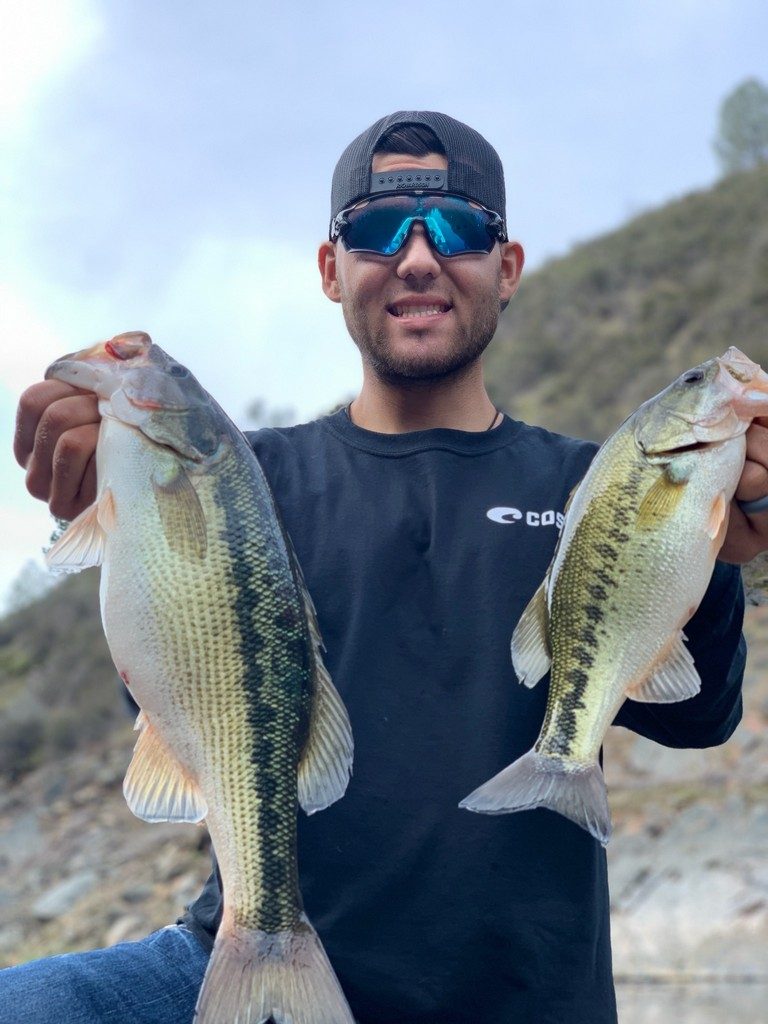 I was looking for steep bluff walls that had immediate deep water access. My weapon of choice was a football head jig. For working the jig, I went with a Phenix Rod M1 7’8” MH rod paired with an Okuma Helios SX baitcaster. I had spooled my reel with some fresh Sunline that I had purchased from my local Fisherman’s Warehouse.
Using my Hummingbird Helix 10 and its side imaging capabilities I quickly zeroed in on a spot that looked ideal.
I made my first cast into about 40 feet of water and before my jig hit the bottom something inhaled it.
I swung and missed. Strike one and of course I got it on camera, LOL!
I shot the next cast into roughly 20 feet of water. My jig hit the floor and I began to drag it into deeper water.
A minute later my rod almost was ripped from my hands! I immediately swung and connected with a 3.5 lb. spotted bass….Boom! I was pretty excited.
With the husky spot in the livewell, I continued making my way down the bank but didn’t make if far before I got hit again. I reeled down with the Okuma and connected with another feisty bass.
With two bass chilling in the livewell, I decided to go and check on Matthew and Daniel to see what they had caught.
As I started filming, Daniel had just begun throwing a football head jig and landed a decent size spot.
It was right after Daniel’s hookup that we unanimously decided to make a run up river in hopes of finding fish in the waterfalls.
As we passed the second bridge, we noticed there was a plethora of floating logs that forced us to be more cautious as we traveled.
At the falls, I hooked a 2.51l b largemouth on my second cast. As I landed the fish, I looked over my shoulder and saw that my partners were busy catching bass of their own. The move had paid off. All 3 of us caught a fish within 5 minutes of dropping the trolling out trolling motors.
We kept at it and kept hooking bass. The day had gone from okay to OH Boy!
As the day was starting to come to a close, we took pictures with our biggest bass and released them back into the water. We motored up to the dock as the sun was setting. We trailered the boats and began to do what every fisherman loves most, CLEAN (just kidding). Thankfully for us, we had a selection of Babe’s Boat Care products which made our cleanup fast and easy.
As the sun went down over the hills, the cool air of January began to take its toll on the three of us. Without the adrenaline of hooking bass, it felt downright cold!
We exchanged handshakes and headed home. While I was driving, I reflecting on how good the day really was. For Matthew, Daniel, and myself, the day had presented a challenge. While winter bass action can be great, finding a pattern can be difficult. I’m proud that we were able to break down the lake as a team and get great footage while doing it!