For most of its history, Lake Chabot, situated on San Leandro Creek in the foothills east of San Leandro, wasn’t even open to fishing.
Built in 1874-75 as a primary drinking water supply the East Bay, the 315-acre lake was closed to fishing and other recreation for 91 years. The lake finally opened for controlled recreational uses in 1965 after legislation was passed in the 1960s. The lake now serves as a standby emergency water supply.
This urban fishing gem, with the forested foothills surrounding the lake now displaying a verdant carpet of green grass after the winter’s big rainfall, supports two types of fisheries – a put-and-take rainbow trout and channel catfish fishery and a resident largemouth bass, crappie, bluegill and catfish fishery.
The rainbow trout are planted in the fall, winter and spring when the water temperature is cool enough to allow trout plants. In 2018, the lake was planted with s total of 15,450 pounds of rainbows by the East Bay Regional Park District (EBRPD) and 1000 pounds by the California Department of Fish and Wildlife (CDFW). 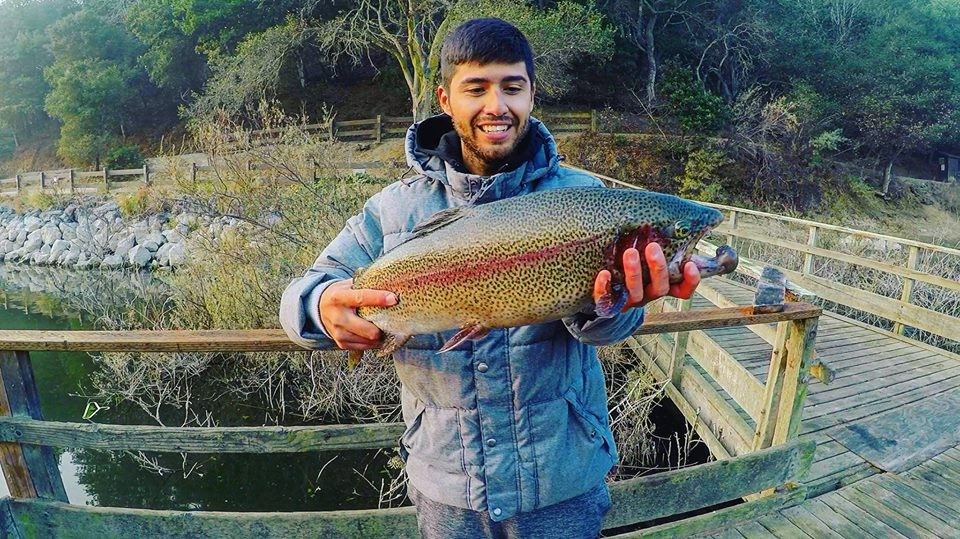 In 2017, the lake received similar numbers of trout – 15,,500 pounds from EBRPD and 1000 pounds from CDFW.
In 2019 to date, the agencies have planted trout twice a month, including 750 pounds the week of January 7, 1000 pounds the week of January 21 and 1000 pounds the week of February 4. Another plant of 750 pounds of rainbows is anticipated the week of February 25, according to Edward Culver, EBRPD Fisheries Resource Analyst.
Although Chabot’s rainbows are hatchery fish, some native landlocked steelhead from Upper San Leandro Reservoir upstream of Chabot are occasionally washed down into the reservoir during high water years, surprising anglers.
The construction of Chabot Dam and subsequent construction of Upper San Leandro Dam on Redwood Creek, a tributary of San Leandro Creek, in 1926 created a unique landlocked population of steelhead that has maintained its genetic integrity and is genetically similar to the native coastal California steelhead.
In this time of declining salmon and steelhead runs in California, the steelhead population is of significant value to restoration efforts due to its genetic integrity. In fact, 615 San Leandro Reservoir trout were used in the steelhead reintroduction project conducted on Wildcat Creek in Tilden Park in 1983.
Planted rainbow trout draw the vast majority of anglers to Chabot. Anglers hook the trout while shore fishing from docks and shore around the reservoir. They use baits including PowerBait, Power Eggs, MiceTails, Zeke’s Sierra Gold floating trout bait, nightcrawlers and lures including Kastmasters, Little Cleos, Rooster Tails and Panther Martins.
Trollers employ nightcrawlers behind dodgers and crawlers, along with Rapalas, Needlefish, Cripplures, Hum Dingers, Apex and other lures.
Every time you go to Lake Chabot you have a chance of catching a monster-sized trout. Ed Evans of Millbrae landed a 22.40 lb. rainbow, the lake record and largest-ever trout to come out of an East Bay lake, while trolling a fire tiger Rapala in April 2007.
The second most pursued fish at the lake is channel catfish. The park district stocks channel cats in the summer and early fall when the lake water is too warm to plant trout. They planted 3250 pounds of catfish in 2018 and 4250 pounds the previous year. 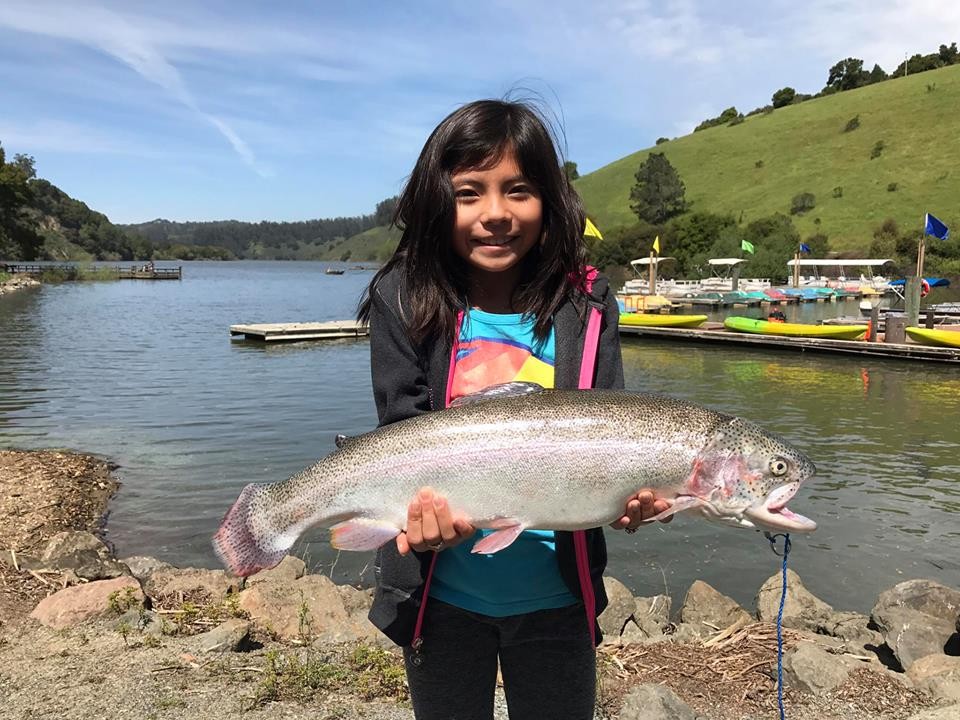 Fishermen hook the catfish while fishing catfish, dough baits, nightcrawlers, mackerel, chicken livers and other “smelly” baits from shore and boat around the lake.
Many of the catfish become “holdovers” and grow big and fat in the lake’s fertile waters. George Goveia of Castro Valley set the lake catfish record of 35 pounds when he fished chicken liver on the lake in 1981.
In recent years, anglers set two new lake records. Ryan Reynolds of San Mateo set a new largemouth bass record for Chabot, catching a 19-pounder, one of the largest bass ever landed in northern California, on October 28, 2016.
Reynolds was fishing with a jig at Alder Point on Lake Chabot at 10 a.m. when he hooked his monster fish. He then released the lunker back into Chabot.
Then an angler broke another lake record in 2017. Francisco Escobar of Castro Valley caught and released a 2.34 lb. crappie at Chabot, a new lake record, on August 16. He landed the fish while fishing a lure near the tules.
The bass and crappie population at Chabot has improved in recent years, due to the habitat project conducted from 2003 to 2006 by Jon Walton, the former owner of Walton’s Pond, and the park district in coordination with the Black Bass Action Committee and Alameda County Fish and Game Commission. 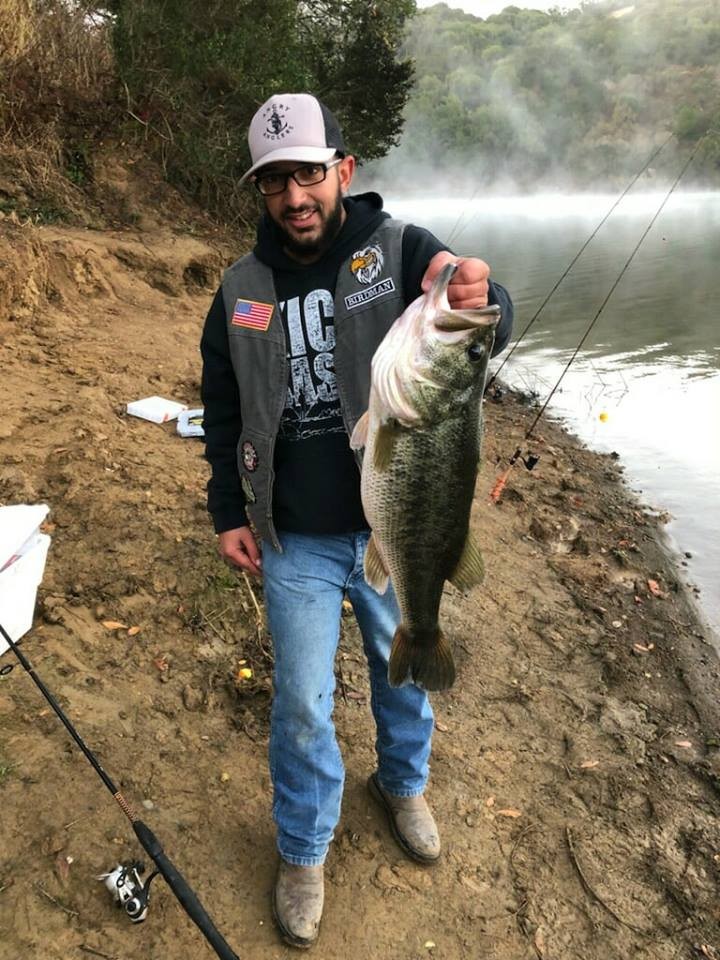 Volunteers organized by Walton put 250 Christmas trees each year in Chabot to create habitat for largemouth bass, bluegill, crappie and other species.
Before they started the project, Chabot was essentially a “big gravel bowl” with little fish habitat. The lake’s bass fishery was characterized by a population of a few big bass that gorged upon each year’s juveniles, since there was little habitat for the smaller fish to find refuge from the larger bucketmouths.
“This type of habitat project allows us to build the food chain from the bottom up,” said Walton. “The trees harbor plankton life and attract juvenile fish to use them as fish hotels. As the bass grow, they will use the fish hotels as ambush sites for forage fish.”
The catch rates, the size of the bass and the numbers of juvenile and adult bass populations have risen since the habitat project was started, as evidenced by electroshocking surveys conducted by the park district.
“The largemouth bass population continues to show good numbers for both juvenile and adult size-classes,” wrote Ed Culver, Fisheries Resource Analyst, and Joe Sullivan, Fisheries Program Manager, in their Lake Chabot Fisheries Report 2013-2017. “Because of the sheer numbers of young-of-the-year largemouth bass caught in 2016, we were unable to measure the length and weight of all of them, and used a subsample to show the length frequencies.
“The high numbers of juveniles in our survey indicate that spawning has been successful and there is high recruitment into the population. We anticipate this trend to continue, and hope to see the large year-class of fish observed in 2016 in subsequent sampling years. As these largemouth bass grow, they will provide anglers at Lake Chabot an exceptional largemouth bass fishery,” they stated.
The bass in the lake are northern strain/Florida strain hybrids. The park district first stocked Florida-strain largemouth bass in Chabot in 1972. The major forage minnow for the bass is the inland silversides while crawdads are also abundant.
Whether it’s rainbow trout, channel catfish, largemouth bass, crappie or other panfish, Chabot offers a great urban refuge for anglers to enjoy outdoor scenery while catching some hard-fighting fish.
A few sturgeon also lurk in the reservoir. Jon Clark set the lake white sturgeon record when he landed a 45 lb. fish on May 23, 2013 while using PowerBait.
After several years of drought that left many docks out of the water, the lake filled again over the past few years with average rainfall in 2016, record rainfall in 2017, average rainfall in 2018 and abundant rainfall to date in 2019.
For more information, contact Lake Chabot Marina and Café, 17930 Lake Chabot Road, Castro Valley, CA 94546, (510) 247-2526, http://www.lakechabotrecreation.com. 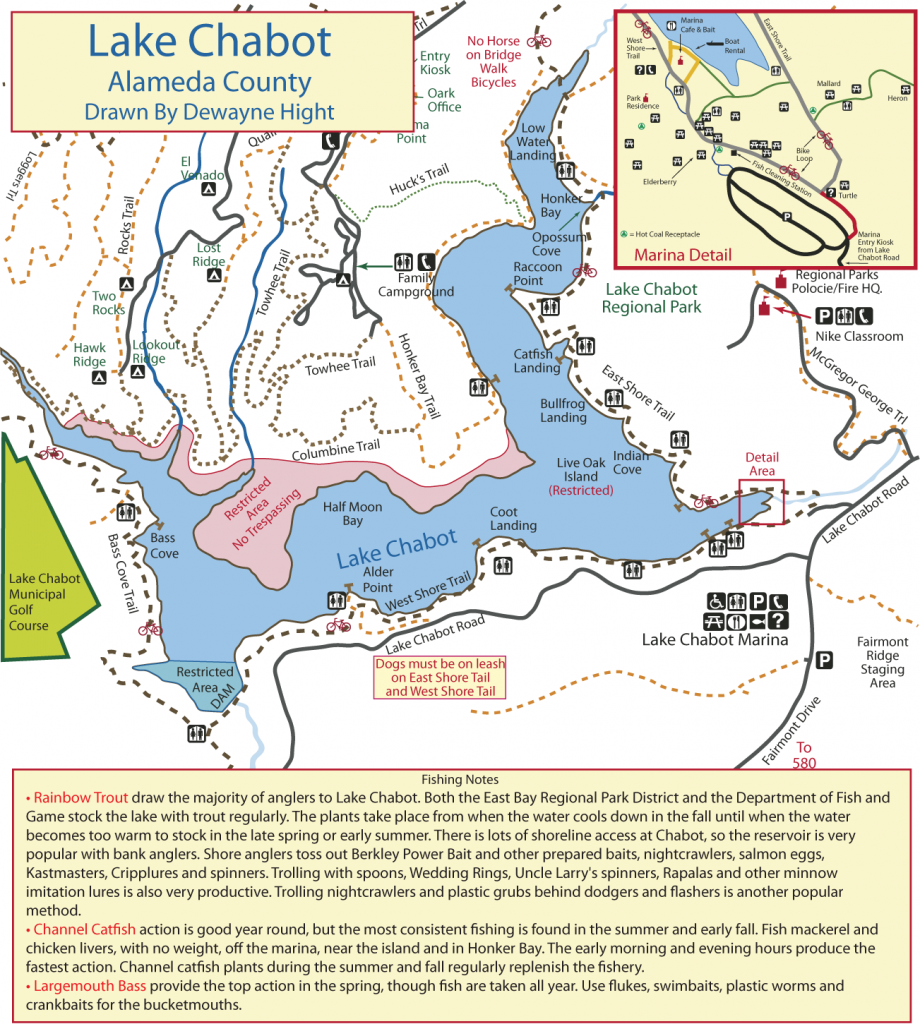 Fishing and Boating: The 315-acre, well-stocked lake is open for fishing and boating throughout the year. The Lake Chabot Marina Cafe offers a well-stocked bait and tackle shop and is open year round (closed Thanksgiving and Christmas). It features a restaurant that serves snacks, breakfast, and lunch. Swimming is not permitted in Lake Chabot.

Regulations: Fishing at Lake Chabot requires a current California Fishing License with stamps and an EBRPD Daily Fishing Access Permit for all anglers aged 16 and older. California Fish and Game regulations apply. Fishing licenses and EBRPD permits may be purchased at the Marina Cafe. No live fish may be used as bait. All other legal bait and lures are permitted. Fish may be cleaned only at the cleaning station along the walk near the parking lot. Catch-and-release angling is encouraged for bass, bluegill, and crappie. However, the release of badly hooked game fish and all non-game fish is not allowed. Please bring any unwanted and tagged fish and your completed creel census card (on back of fishing permit) to the Chabot Marina.

Rental boats and private craft: Rental boats include row boats, canoes, pedal boats, kayaks, Duffy boats, and boats with electric trolling motors. For more information, call (510) 247-2526. Canoes, kayaks, and scull craft 20 feet and under may be carried in and launched ($2). Inflatables with 3 or more chambers are allowed. Float tubes may be used at Lake Chabot. Persons using float tubes must wear waders or other wetsuit material to prevent body contact with the water in the reservoir.

ADA Accessibility: Lake Chabot has several fishing piers that include one with access for the disabled, and there is a wheelchair ramp from the parking lot to the marina. Within the marina area, there are wheelchair accessible restrooms, drinking fountains and picnic tables. The disabled parking spaces are located in the main lot.

Picnicking: Picnic facilities (tables with barbecue pits) are located adjacent to the parking and marina area. These sites include first-come, first-served sites and 6 reservable picnic areas that accommodate 50-200 people each, depending on the site. For information or to make a reservation, call all 1-888-EBPARKS.