Kris Caceres of Loomis caught just one fish at Lake Pardee on Saturday, March 2, but it was the right one.

He landed a 7.03 lb. rainbow trout while trolling with his buddies Ishi Cholette of Sacramento and J. Staffes of Loomis, winning first place in the Norcal Trout Anglers Challenge Tournament at the popular Mother Lode Reservoir on the Mokelumne River. 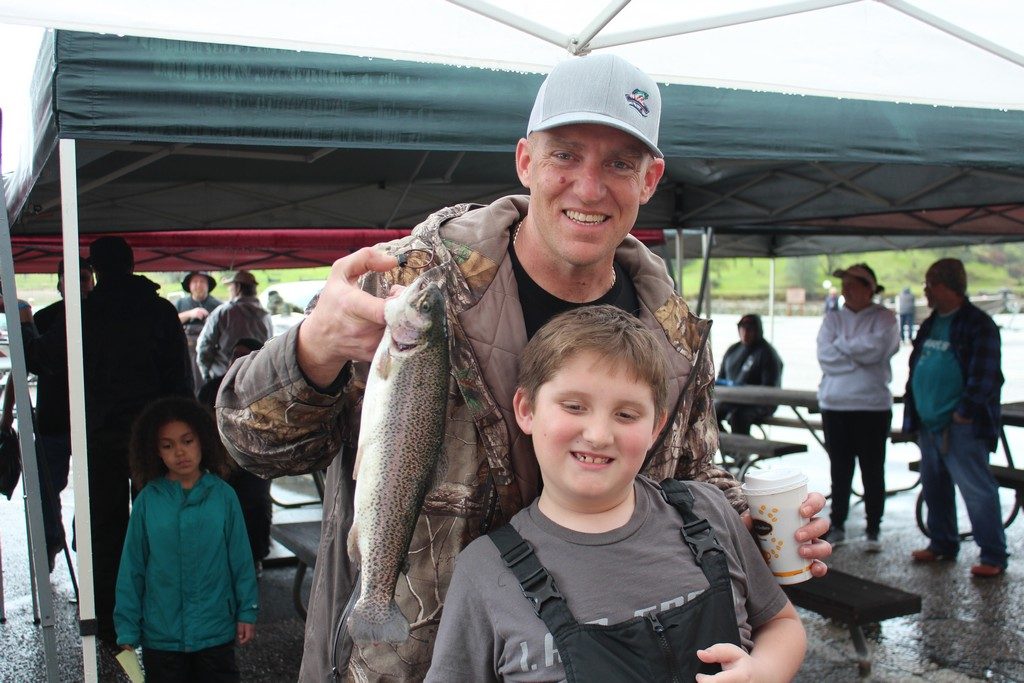 The fish was a beautiful wild trout from the Mokelumne River or a holdover planted fish, with perfect fins and tail.

“I hooked the fish about 8 feet deep behind a boulder,” said Caceres. “It was the only fish any of us hooked all day. The rod broke as I was fighting the fish, but we managed to net it anyway.”

“I didn’t catch the fish until noon,” he emphasized. “It just shows that you are never done until you’re done. It was the first trout tournament that I have ever entered, though I have fished bass tournaments before.”

Joey Hill Jr. won first place in the event’s youth division by catching a 1.76 lb. rainbow while fishing across from the marina with his dad, Joe Hill Sr.

“I was bait fishing when I hooked the fish,” said Hill. “We caught our three fish by 9 a.m. We didn’t catch any fish after that.”

The anglers braved the cold and at times torrential rain to catch their trout in the event presented by Gone Fishin’ Marine and Lasher Elk Grove Ram and hosted by Angler’s Press Outdoors and the Fish Sniffer magazine.

“Once again this group of dedicated anglers braved the elements and showed up in big numbers to stay in the hunt for a berth in this year’s championship on Collins Lake in November. The race is on and it’s shaping up to be and exiting year,” noted Vince Harris, president of Angler’s Press Outdoors, the organization that created the NorCal Trout Anglers tour.

Twelve anglers entered the youth division for the tournament, with three weighing in fish. Aponi Taylor placed second with a 1.44 lb. rainbow, while Jacob White placed third with a 1.3 lb. trout.

One angler won $100 and a tackle box filled with Rooster Tail lures for catching a trout while using a Rooster Tail. 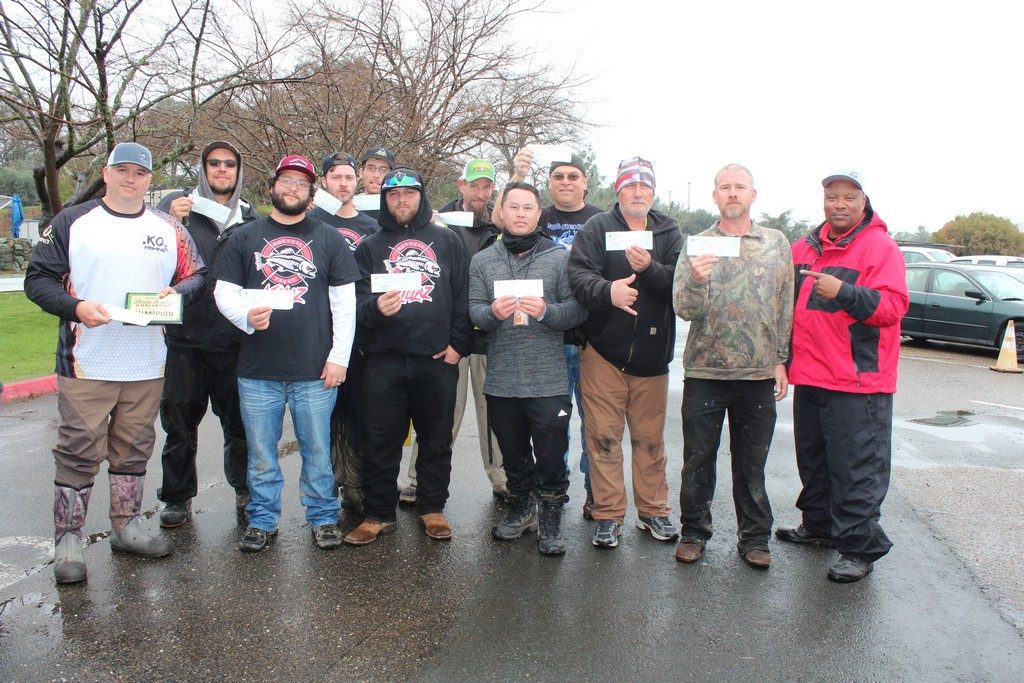 Rainbow trout are the most popular species pursued at Pardee – and grow big and fat in the rich waters of the reservoir. Ronny Shelton of Ione set the lake rainbow record on June 14, 2002 when he landed an 18.65 lb. fish while bank fishing with Power Bait in the recreation area.

The fishing last season opened under new management, the Rocky Mountain Recreation Company. The rainbow trout fishing was superb at Lake Pardee on the opening weekend of 2019.

For example, Daryl and Therese Carter of Sacramento reported catching their five fish limits of trout averaging 1 to 1-1/2 pounds each by 9 a.m. on February 15.

“It was lights out fishing,” said Carter. “We used various colors of Power Bait in the main recreation area. Everybody around us was catching fish also. We both had second rod stamps, but the fishing was so good we couldn’t get our second rods in the water. “

The Rocky Mountain Recreation Company stocked 10,000 pounds of trout for the opening weekend and has stocked trout weekly since then.

Trollers can catch good numbers of holdover rainbows while trolling spoons, spinners, minnow imitation lures and nightcrawlers from the surface to 20 feet deep from the Narrows to the dam.

Shore anglers can also pick up quality rainbows in the 1 to 5 lb. class while fishing nightcrawlers, Power Eggs and PowerBait on sliding sinker rigs.

The lake also a sleeper population of wild German browns that spawns in the Mokelumne River and ventures into the lake in search of forage, including the abundant trout and kokanee.

Chris Harris of Sacramento set the lake brown trout record in 2010 when he landed a 15.36 lb. fish while trolling for kokanee at 30 feet deep near the dam. He was using a pink fire tiger Uncle Larry’s spinner behind a Sep’s dodger. 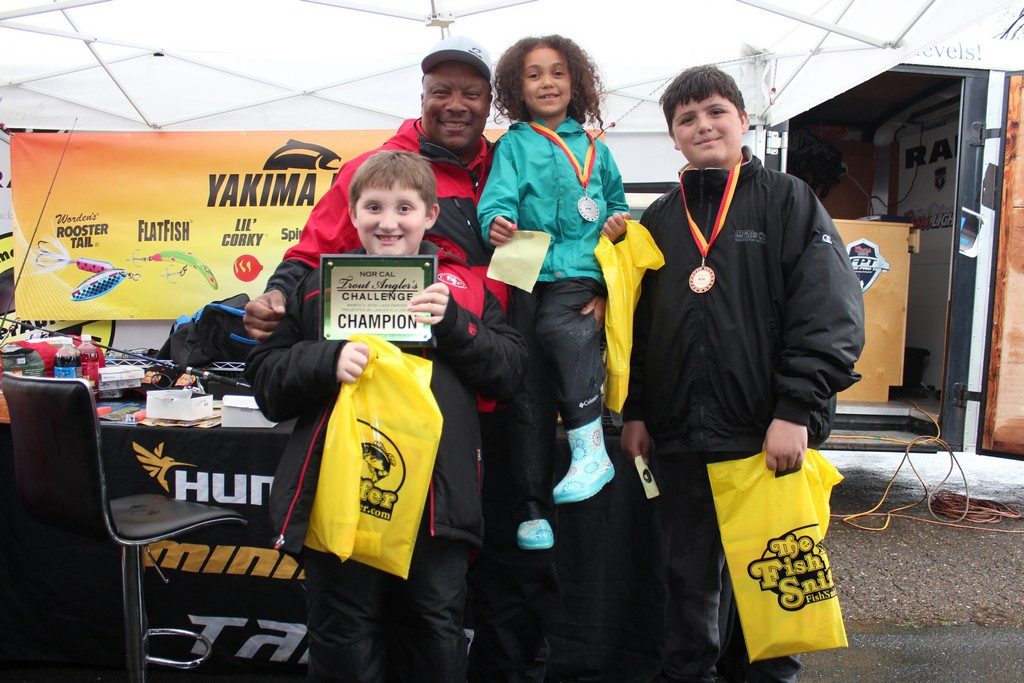 Kokanee salmon offer another quality salmonid fishery at Lake Pardee. The fish are extremely abundant most years, finding excellent spawning conditions in the Mokelumne River, so the CDFW no longer plants the reservoir with the kokanee. The kokanee fishing was tough last year, but hopefully will be better this season.

While most anglers fish the lake for salmonids, the lake is home of record-class smallmouth bass. Harold Hardin of Stockton set a new state smallmouth bass record in July 2007 by landing a 9.83 lb. bronzeback, shattering the previous state record of 9.1 pounds caught by Tom Brady of Weaverville in 1976 at Trinity Lake. He fooled the fish with a 6 inch long charcoal colored Castaic swimbait in his aluminum boat.

Then during a Lake Pardee Media Day in 2008, two anglers bagged two monster smallmouths over 9 pounds in one day.

Allen Fong of Fisherman’s Warehouse in Sacramento caught and released a 9 lb. 5 oz. smallmouth while fishing with a green Yamamoto jig outside of the recreation area cove in 20 feet of water. Bass pro Dean McDaniel also nailed a 9 lb. 2 oz. largemouth while fishing a grub in the same area.

While known for its huge smallmouth, Pardee also has a good population of northern strain largemouth bass. Jack Billington from Ione captured the Pardee Lake record when he caught and released a 13.4 lb. largemouth using Blade Runner chartreuse and white craw jig on March 22, 2007.

Other species found in the reservoir include channel catfish, bluegill and crappie.
Located on the Mokelumne River, Pardee Recreation Area provides stunning views and diverse activities for all visitors, old and young. The park is nestled in the foothills of the Sierra Nevada of Northern California and is just twelve miles southwest of Jackson.
As the center of EBMUD’s drinking supply, to comply with state law, personal water crafts, water skiing, and lake swimming are not permitted.

For more information about the NorCal Trout Angler’s Challenge, call Vince Harris at (916) 768-0938 or go to: http://www.anglerspress.com.

Location and size: Situated on the Mokelumne River in the Mother Lode foothills west of Ione, Lake Pardee has 2257 surface acres and 37 miles of shoreline when full.

Camping: Lake Pardee features a total of 141 beautiful, oak studded campsites located within two separate campgrounds within its boundaries. Campsites offer plenty of shade, are clean and each contain a picnic table and a fire ring. Clean, portable toilets are within a short walk. In each campground, running water is close to or right next to a site. Two ADA designed handicap sites are also available. Lakeview Campground is within walking distance of most facilities. The Oaks Campground is a little more secluded. For reservations and fee information, call (209) 772-1472.

RV Sites: Nightly and weekly RV sites, known as “C” units, are located in the Oaks Campground and feature full hook-ups, including electricity, water, and sewer connections. Each site has a picnic table and fire ring.

Boat ramp: The ten-lane boat launch ramp is a real convenience for easy launching and exiting. The extra long trailer parking area is also a plus to boaters at Pardee. Note: EBMUD rangers will be inspecting boats for the presence of Quagga and Zebra mussels.

Boat rentals: are available out of Lake Pardee Marina for hourly, half day, full day and weekly rates. Deluxe and pontoon boat rentals are also available.

Fishing fees: Permits are $6.50 each day for each individual 16 years and older. A valid California fishing license is also required for all persons fishing who are age 16 and older.

Fish cleaning facilities: The state-of-the-art fishing cleaning station is an automated system where you simply approach the station and the grinder turns on automatically. Also, it is ADA designed for the disabled. It’s open 24 hours per day, seven days per week.