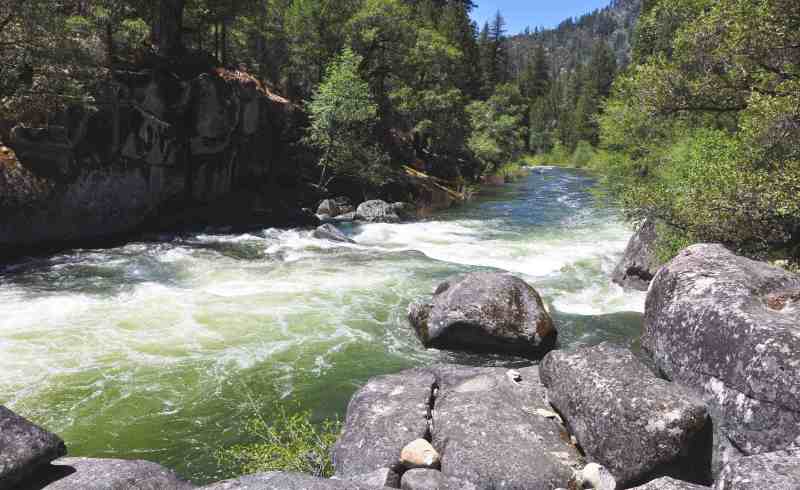 Record numbers of salmon and steelhead have returned to the Mokelumne River Fish Hatchery in recent years, but the outlook is even brighter with the release of a study that shows the possibility of the reintroduction of the iconic salmonid species in a 13.7 mile stretch of the Mokelumne above Lake Pardee.

The California Department of Fish and Wildlife reported a modern record of more than 19,900 fall-run Chinook salmon returned to spawn in the lower Mokelumne in the fall of 2017. The 2018 fall salmon returns were also impressive, with a total return of 17,474 fish.

“The advances in releases of salmon, coupled with the Mokelumne River Fish Hatchery Manager Bill Smith’s care of the fish, have resulted in big, strong fish that are in really good shape,” said John McManus, President of the Golden Gate Salmon Association. “The Mokelumne Hatchery has apparently discovered some type of magic in their stewardship of salmon.”

If a pilot study bears fruit, salmon and steelhead may be once again spawning in the Mokelumne above Pardee, making the magic taking place in CDFW and EBMUD’s stewardship of the lower Mokelumne extend into some of the salmon’s historic upstream habitat.

With that in mind, the Foothill Conservancy, East Bay Municipal Utility District, other nonprofit groups, businesses, state and local agencies, and tribal interests — working together as the Upper Mokelumne River Salmonid Restoration Team — have been exploring the potential to restore fall-run Chinook salmon to the upper Mokelumne River, according to a news release from the Conservancy and EBMUD.

The  recently released study conducted by Cramer Fish Sciences shows that 13.7 miles of Mokelumne River above Pardee show the potential to support both spawning and rearing of chinook salmon.

“The next step in exploring this potential will be a pilot project, likely reintroducing a small number of salmon upstream of Pardee Reservoir,” according to the Conservancy and EBMUD.

“East Bay MUD and the California Department of Fish and Wildlife have done a great job of increasing the salmon population in the lower Mokelumne River through the operation of the Mokelumne River Fish Hatchery,” said Foothill Conservancy Vice-President Pete Bell. “For more than eight years in a row, the number of salmon returning to the hatchery exceeded its capacity.”

“Those ‘excess’ fish could be available for direct reintroduction into the upper watershed without reducing the hatchery production. This new study shows that we may be able to return some of the returning salmon to their historic spawning habitat in the upper Mokelumne for the first time since Woodbridge and Pardee dams were built early in the last century,” said Bell.

The study also points out that the reintroduction of salmon to historical habitats on the Mokelumne may have “profound cultural, economic and ecological benefits.” Spawning salmon also attract people for viewing, which could bring economic benefits from ecotourism. The study states:

“Reintroduction of fall-run Chinook salmon to the Upper Mokelumne River offers an opportunity to provide access to over 27km (~17 miles) of historic habitat. The reintroduction of salmon to historical habitats may have profound cultural, economic and ecological benefits. Salmon are an integral part of West Coast culture, primarily with the native peoples of the Pacific Northwest and California and more recently, with hundreds of salmon festivals taking place each fall. Reintroducing salmon to historic habitats can potentially link cultures to lost traditions in the watershed.”

Reintroducing salmon to the watershed could provide positive ecosystem-level impacts by restoring marine nutrients to the river and watershed and food for fish and wildlife, according to the scientists.

The Mokelumne’s salmon are critical to California’s recreational and commercial salmon fishery. The Mokelumne and other Central Valley salmon stocks generate millions of dollars every year from Morro Bay in the South to Shelter Cove in the north.

“We’re glad to learn there’s still good salmon habitat in the Mokelumne River above the dams,” said McManus. “Researchers are proposing a first step to see if adult salmon can successfully be relocated there to spawn. Fish produced in the upper Mokelumne could benefit the salmon fishing industry, if paired with EBMUD’s successful hatchery program to release juvenile fish in the Western Delta. This program would provide valuable lessons that might be used on other California rivers.”

“We look forward to continuing this valuable collaboration for the benefit of the Mokelumne River fishery and for the enjoyment of a renewed public trust resource in the river above Pardee Reservoir,” said Workman.

Grants from the Lower Mokelumne River Partnership and the Firedoll Foundation funded the salmon habitat study.

“This is an important step in the ongoing effort to restore the Mokelumne salmon fishery,” concluded Chris Shutes, a consultant for Foothill Conservancy. “Now that we have this data, we can start to design a pilot reintroduction project.”

A copy of the study can be found online at www.foothillconservancy.org/salmonstudy