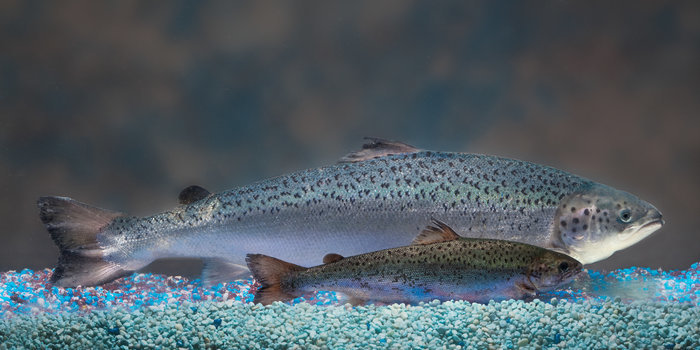 Photo: AquaBounty’s salmon (background) has been genetically modified to grow bigger and faster than a conventional Atlantic salmon of the same age (foreground.) Photo courtesy of AquaBounty Technologies, Inc.

The federal Food and Drug Administration (FDA) on March 8 announced that it will lift the import ban on eggs of AquaBounty’s genetically modified salmon product, drawing praise from the company and strong criticism from fishing organizations.

“Today, we are taking another important step by deactivating a 2016 import alert that prevented GE salmon from entering the U.S.” claimed FDA Commissioner Scott Gottlieb, M.D. “The FDA’s approval of the application related to AquAdvantage Salmon followed a comprehensive analysis of the scientific evidence, which determined that the GE Atlantic salmon met the statutory requirements for safety and effectiveness under the Federal Food, Drug, and Cosmetic Act.”

AquaBounty Technologies, Inc. said the lifting of the import alert would allow the Company to start farming AquAdvantage Salmon in Indiana.

“We are delighted that FDA has lifted the import alert, which will allow AquaBounty to begin producing and marketing AquAdvantage Salmon in the United States,” said Sylvia Wulf, Chief Executive Officer of AquaBounty. “As FDA notes in this announcement, our salmon was approved by the agency over three years ago based upon a very comprehensive science-based review process, which established that our salmon was safe, nutritious, and environmentally sound and met all other regulatory requirements.”

“We will immediately start the process to import AquAdvantage eggs from our hatchery in Canada to begin grow out at our Indiana facility,” she said.

Both the Pacific Coast Federation of Fishermen’s Association and the Golden Gate Salmon Association blasted the decision and vowed they will fight keep fighting against the import of frankenfish for the U.S. market.

“A loophole has now been created that will allow the first genetically modified animal engineered for human consumption to enter the US market: GMO Atlantic salmon,” said Pacific Coast Federation of Fishermen’s Associations executive director Noah Oppenheim. “Fishermen have been fighting against the possibility of these frankenfish entering our waters and our markets for years, and we won’t stop now. Consumers, beware: this product is not the sustainable seafood you know and love.”

“The Golden Gate Salmon Association and allied groups are currently in court challenging the approval of farmed salmon carrying foreign genes that change the basic DNA of the fish,” said John McManus, president, Golden Gate Salmon Association. “You have to wonder how much money changed hands to get our government to now allow this frankenfish onto unwary American consumers.  Consumers should tell their grocers not to carry this product. They should also tell their Congressional representatives to require clear labeling so no one ends up eating this material unknowingly.”

After FDA approved Aquabounty salmon for human consumption in 2015, Congress in 2016 directed the FDA not to allow into commerce any food that contains GE salmon until it issued final labeling guidelines for informing consumers of the GE salmon content in the food. The FDA complied with this requirement by implementing an import alert in 2016 that prevented GE salmon from entering the U.S.

“With Congress’ enactment of the National Bioengineered Food Disclosure Standard, the U.S. Department of Agriculture (USDA) was charged with implementing a mandatory standard for disclosing whether a food is ‘bioengineered’ and FDA was divested of its authority over voluntary labeling to indicate the presence of GE content in human foods,” according to Gottlieb.

“The FDA no longer has the authority to issue labeling guidance on this topic; however, the FDA believes this Congressional mandate has been satisfied by the USDA’s issuance of final regulations implementing that law in late 2018 because the law and regulations require that human food containing GE salmon bear labeling indicating that it is bioengineered. Therefore, the FDA is deactivating the import alert that prevented food from AquAdvantage Salmon, including salmon eggs used to grow the fish, from entering the U.S.” he claimed.

For more information, read my November 2015 article in the East Bay Express: www.eastbayexpress.com/…

The Yurok Tribe, the largest Indigenous Tribe in California with over 6,000 members, in December 2016 banned genetically engineered salmon and all Genetically Engineered Organisms (GEOs) on their reservation on the Klamath River in the state’s northwest region.

The Yurok ban came in the wake of the federal Food and Drug Administration (FDA) decision on November 19 to approve genetically engineered salmon, dubbed “Frankenfish,” as being fit for human consumption, in spite of massive public opposition to the decision by fishermen, Tribes, environmental organizations and public interest organizations.

The Ordinance allows for enforcement of violations through the Yurok Tribal Court. Yurok Chief Judge Abby Abinanti stated, ‘It is the inherent sovereign right of the Yurok People to grow plants from natural traditional seeds and to sustainably harvest plants, salmon and other fish, animals, and other life-giving foods and medicines, in order to sustain our families and communities as we have successfully done since time immemorial; our Court will enforce any violations of these inherent, and now codified, rights.”