Three hundred people braved rain and wind to fish the fifteenth Annual Sand Crab Classic Perch Tournament along the beaches, piers and rocks from Big Sur to Half Moon Bay on March 9.

The event was a benefit for the Monterey Bay Salmon and Trout Project, whose mission is to recover the native salmon and steelhead populations of the Monterey Bay region. The event raised $5,000 for the project, established in 1976. If it wasn’t for this project, anglers would not enjoy the solid fishing that they found in the San Lorenzo River and local creeks this season.

“Weather and ocean conditions were tough, but as usual some really big fish were brought in to the weighmasters,” said Allen Bushnell, who coordinated the event with Mike Baxter. “This was the best Sand Crab Classic ever and next year will be even better.” 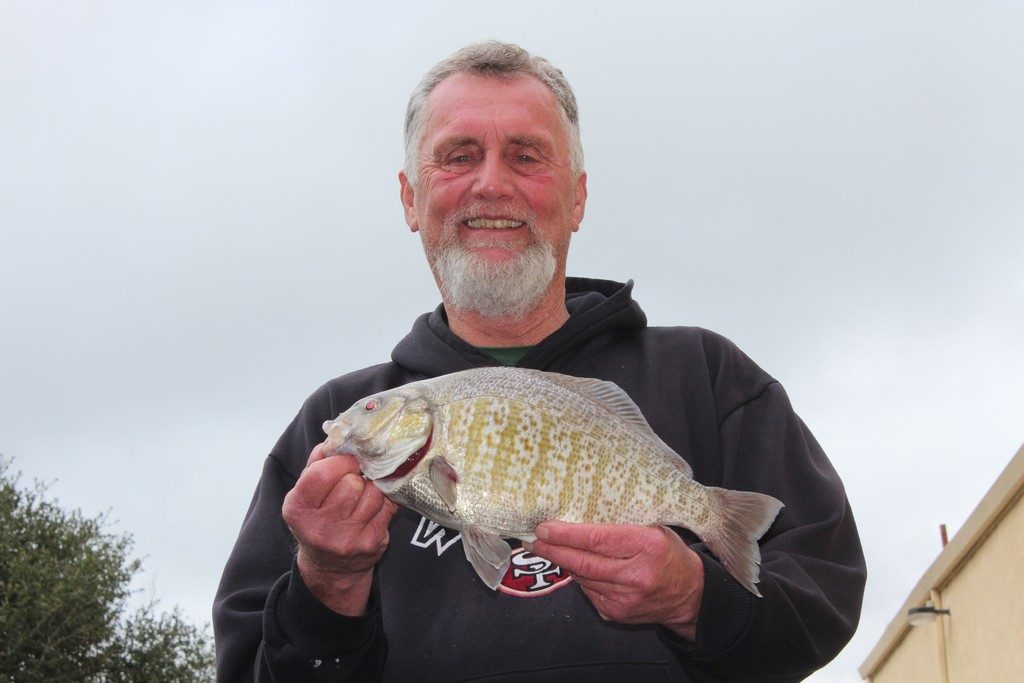 Over 350 people attended the weigh in at the Portuguese Hall in Santa Cruz – and 40 volunteers helped out with the event.

The event is one of my favorite events of the year to go to. The 300 places for the tournament were sold out in only two days this year. This year there were more people than I’ve ever seen at the event.

This year the winning fish were caught from shore from Big Sur in the south all of the way to San Gregorio in San Mateo County. However, most fish were landed inside Monterey Bay. Some of the spots were anglers caught perch included Santa Cruz, Monterey, Manresa Beach, New Brighton Beach and Zuma. Other spots outside of the bay included Carmel and Pescadero.

It is notable that the Monterey Bay area features the most diverse arrays of perch species found anywhere on the west coast. For example, during the first Sand Crab Classic held in January 2005, I saw 7 varieties of perch landed off the Santa Cruz Municipal Wharf alone.

I used sand crabs for bait between 26tth and 21sth Avenues in Santa Cruz to catch the big fish,” said Gomez. “I was fishing with my sons, Matt and Dave, and Paul Giannocaro.” 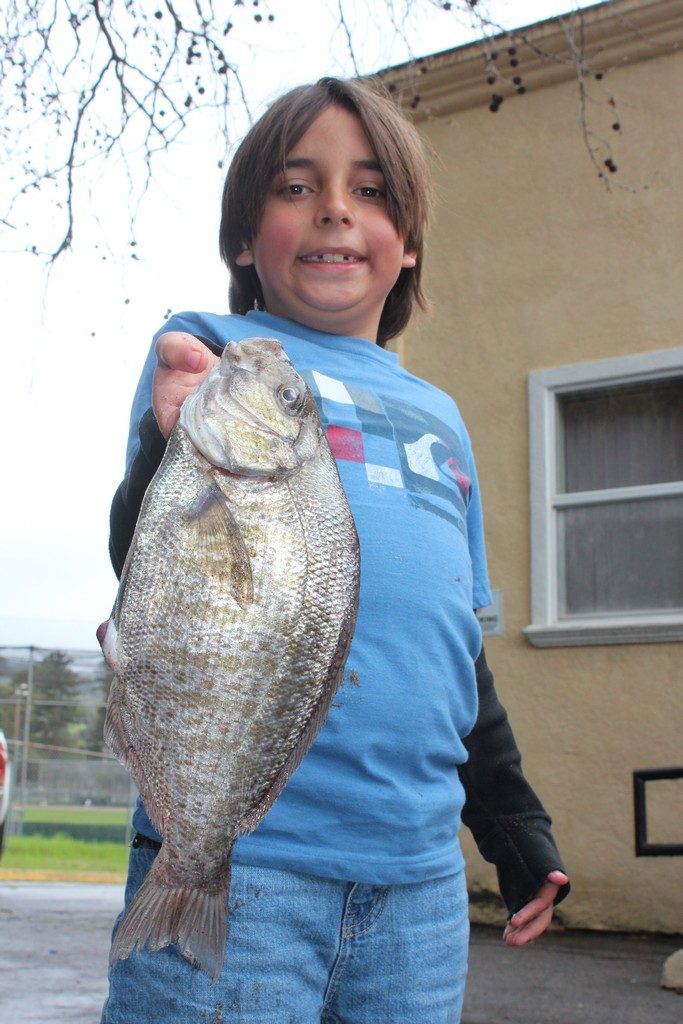 David Hernandez placed second with a 2 lb. 11.8 oz fish that he caught off Manresa, while Greg Gomez placed third with a 2 lb. 10.3 oz perch measuring 15-1/4 inches that he landed off the East Side. 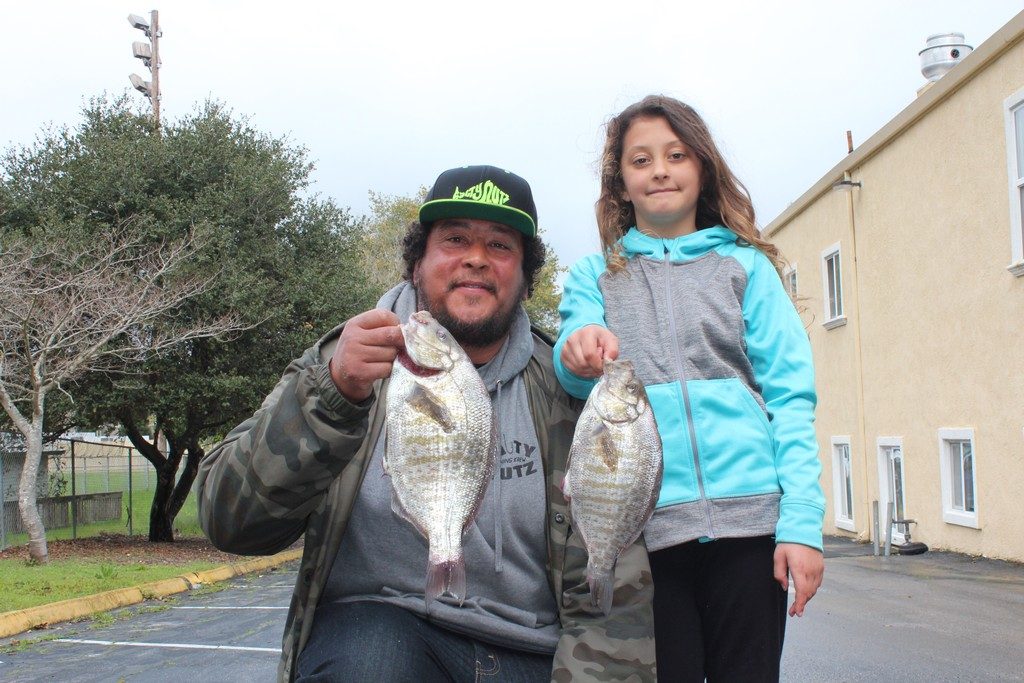 The winners all received trophies. As usual, the Sand Crab Classic was a fun grassroots community event featuring many raffle prizes, wonderful food and lots of good times for all. Information: https://www.sandcrabclassic.com/index.php.

Clara Ricabal, the field representative for Jackson Fishing Kayaks, targets various species of fish and game from ling cod to salmon to largemouth bass, and was very enthusiastic about the event.

“As a resident of Santa Cruz County and a steelhead angler on the San Lorenzo River, I am a huge supporter of the event, and I looked forward to participating this year by pre-fishing the week on a beach south of Moss Landing,” she said. “My game plan prior to derby day was live bait of sand crab or pile worms along with plenty of warm clothing and rain gear, but my true colors came out as, despite bringing everything under the sun in my tackle kit including my sand crab rake, I stuck with a tried-and-true producer, a 2-ounce Kastmaster with white bucktail sprayed with Worden’s Rooster Tail Spray.”

“It was windy and rainy, and in spite of numerous casts, I had only one bite, but it was a good one, creating a few moments of excitement. However, I got too excited as the fish put on quite a fight and I was able to get the it close to the surf before I walked forward when I should have backed up. There were around five other fishermen on our beach, and they also seemed to struggle,” she said.

“My happiest moment was watching my friend, Bryan Servel, take the first spot in the Sea Perch Division. He has been trying for many years, and despite recent health setbacks, he finally came out on top,” she concluded.

I love fishing for perch – and got my start fishing for these light tackle scrappers in Monterey Bay back when I was living and working in San Jose. Felix Alvarez, now living in Modesto, and I often had fun fishing the rocks and piers from Santa Cruz to Moss Landing, with my largest rubberlipped perch, caught in the early 80s, weighing around 4 pounds. It’s always astounded me that so relatively few rubberlipped perch are weighed in the event each year.

For more information about the Sand Crab Classic, go to: https://www.sandcrabclassic.com

Season: Monterey Bay and the adjacent ocean coast features some of the most diverse populations of surfperch (Embiotocidae family) found along the Pacific coast. The season is open year round.

Camping and Lodging: Plenty of motels, hotels and campgrounds are available in the cities of Santa Cruz, Capitola, Aptos, Watsonville, Marina, Seaside and Monterey, but you need to book lodging well in advance, especially during periods of good weather