When you travel up to Alaska, the salmon capital of the United States, and talk to the locals, you learn some interesting things about salmon.
Alaska residents have access to all the major species of salmon including kings, silvers, sockeyes, chums and pinks. When it comes to the species that generates the most excitement from a trophy hunting perspective, it’s the kings. And why not? Alaska’s kings are plentiful and they grow to massive proportions, with 50, 60 and 70 pounders being common fare in the fabled Kenai and other rivers.
When you ask which species of salmon are the most fun to catch, most Alaskan’s will tell you that silvers narrowly beat out sockeyes primarily due to the larger size silvers attain and their tendency to embark on a series of wild jumps when hooked. But when the subject turns to table fare it’s the crimson colored sweet tasting meat of sockeye salmon that spark the most enthusiasm among Alaska’s salmon aficionados.
Unfortunately, here in the Golden State, we don’t have an opportunity to target sockeyes in ocean waters or in our coastal rivers, but that’s not to say that we don’t have access to some outstanding sockeye action, because we do. Many or our inland reservoirs, such as Whiskeytown Reservoir, Bullards Bar Reservoir, Lake Pardee, New Melones Reservoir and Stampede Reservoir to name only a handful, play host to solid landlocked sockeye populations, but we don’t call them sockeyes, we call them kokanee.Over the past 30 plus years no freshwater gamefish has gained as much popularity with California anglers as kokanee salmon. This spike in popularity can be traced to a number of significant developments over the past three decades, including the efforts of conservation organizations and the DFW to increase the range and numbers of kokanee statewide, the widespread popularity of sonar units and downriggers, and the development of light tackle trolling hardware that allows the diminutive salmon to showcase their fighting ability.
Indeed, on light tackle kokanee salmon are determined battlers that will get the adrenaline flowing in even the most stoic angler. Add to all this the excellent meals kokanee provide and it is little wonder why targeting them has become so popular. 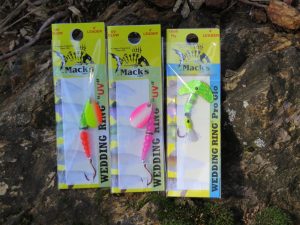 I meet a lot of anglers that are intrigued by the idea of kokanee fishing, but don’t target them because they believe kokanee fishing is complicated. I’ve been fishing for kokanee for many years and I’m here to tell you that it is not particularly complicated, provided you have a few basic tools.
The first step to catching kokanee is learning about their lifestyle. Kokanee are unique among freshwater gamefish in terms of diet. Kokanee feed almost exclusively on plankton and mysis shrimp according to the Department of Fish and Wildlife.
Kokanee prefer water temperatures in the middle 50’s. In the spring, when water temperatures are cool, kokanee will be holding near the surface. Later in the summer, as water temperatures rise the ‘kokes will drop down in the water column in search of comfortable temperatures.
By mid-summer it is not uncommon to find kokanee salmon holding in the 100-foot range. In addition to water temperature, the light level and boat traffic can also cause kokanee to move into deeper water.
Since kokanee are creatures of the depths, the two most important tools for the aspiring kokanee angler is a downrigger and a powerful sonar unit that has a high pixel rating for identifying kokanee. Most downriggers come equipped with clips that have too much tension for kokanee trolling. Kokanee have soft mouths. The result of using a 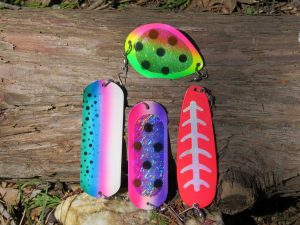 clip with too much tension is lost fish due to hooks pulling out.
This being the case you’ll want to pick up a lightweight downrigger clip before hitting the lake. Several manufactures offer special light and ultra lightweight clips that are perfect for kokanee.
The beauty of downriggers is that once a fish is hooked and the line is pulled from the clip the fish can be fought on light tackle without the interference of added weight. Most avid kokanee anglers prefer light action casting style rods from 7 to 8 feet in length.
As I mentioned kokanee have a soft mouth and pull off the hook fairly easily. Back in the early days of kokanee trolling, anglers integrated rubber snubbers into their rigs to act as a cushion that minimized lost fish due to hooks being pulled out. These days snubbers are no longer needed, since anglers have access to soft slow action rods that provide all the cushion necessary to keep your hook imbedded in the mouth of the kokanee, right where it belongs.
The rod should be teamed with a level wind high speed reel that has an exceptionally smooth drag spooled with 8 or 10 pound test monofilament line. As with rods there are a great many excellent reels available to today’s aspiring kokanee angler.
At the heart of the kokanee angler’s arsenal are lures, dodgers, and flashers. Since kokanee feed on plankton and mysis shrimp they likely don’t strike lures in an attempt to feed. Instead they strike as an act of aggression. No one can say for sure why kokanee choose to attack one lure over another, but it seems to be a combination of shape, color, vibration, and smell.
Visibility and vibration are factors that strongly influence whether or not kokanee will strike. Vibration from lures, dodgers, and flashers draw fish close enough to see the lure. In terms of visibility, you don’t want a lure that is overly visible. Many times the fish will avoid an overly bright lure. In general, during bright conditions its best to use subdued colors such as gold and copper. Early and late in the day when light levels are low, silver and nickel are often the best choices.
When you look into the tackle kit of most veteran kokanee trollers you’ll find many different lures and scores of dodgers, but what does the inspiring kokanee enthusiast need in the beginning?
Spinners are extremely popular and productive offerings, but I’m not talking about the inline wire mounted type of spinners used by trout anglers. I’m talking about spinners like Mack’s Lure Wedding Rings that are rigged on a monofilament leader. For starters you’ll want about a half dozen spinners in colors hot pink, orange, green, gold, copper and chrome. 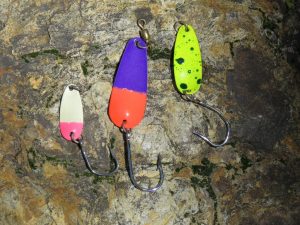 Beyond spinners small spoons such as Dick Nites, Mack’s Lure Hum Dingers and Vance’s Tackle Sockeye Slammers in the same colors as mentioned for spinners are solid choices.
The beginner’s lure selection is topped off with an assortment of small hoochies (plastic squid skirts) in a variety of basic kokanee fishing colors.
In addition to lures you’ll also need some dodgers. A number of companies produce excellent 3,4 and 6 inch dodgers that are routinely employed by successful kokanee anglers. You don’t need a big selection to get started. If you had dodgers in chrome, brass, watermelon and pink or orange in both 4 and 6-inch sizes, you’d have your bases covered in most situations.
The distance a lure is trolled behind the dodger is always a point of much discussion. The basic rule of thumb is that during the early season, you can run your lures that have action of their own, such as spoons and spinners back 18 to 24 inches. This distance should gradually be shortened as the season progresses until the lures are only 8 to 10 inches back in late summer and early fall.
Most kokanee anglers worth their salt wouldn’t think of trolling a lure without adding a kernel of shoe peg corn to the hook. Corn adds a pleasant scent to the lure and acts as a target for the kokanee to strike. Corn can be used plain out of the can or it can be doctored with scents such as Pro-Cure anise or Kokanee Special.
Most knowledgeable kokanee anglers will carry several small containers of corn with different scents added to each, allowing them to experiment until they find the most effective combination.
Once kokanee have been located with the sonar unit, catching them is often a matter of experimentation. Kokanee can be fickle, ignoring today what they loved yesterday. For this reason the best anglers constantly vary their end tackle in terms of color, action, and scent until they find a combination that works. You should also vary the distance you trail the lure from the downrigger ball. I like to begin 20 feet back and then move closer to, or farther from the ball depending on the water clarity and depth I’m fishing.
If you haven’t given kokanee fishing a try, grab a little tackle and go get those salmon this spring and summer. I think you’ll enjoy the experience!