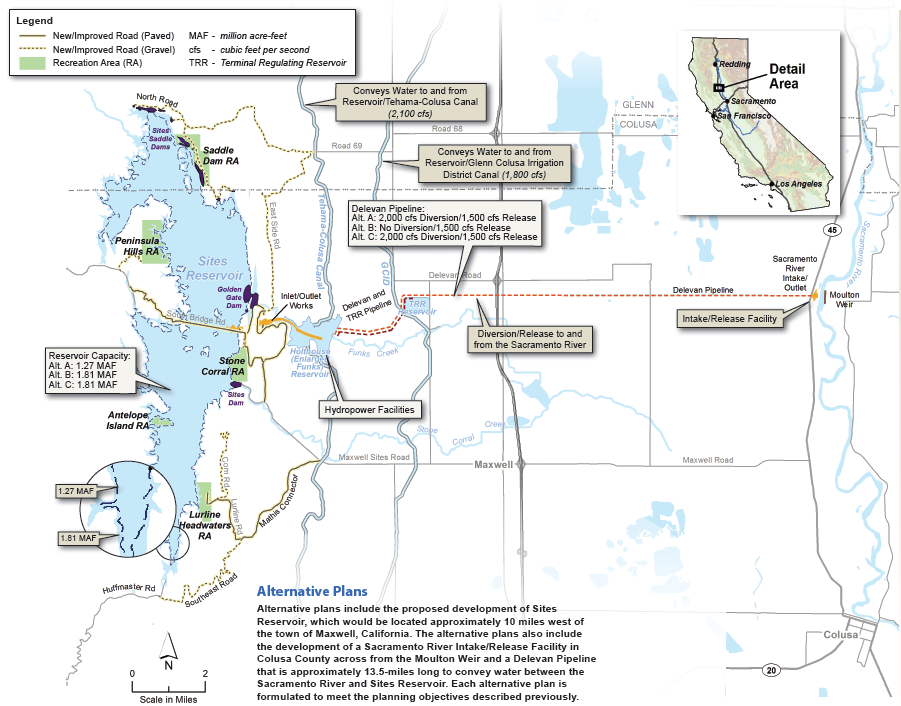 A coalition of 27 organizations, including Indian Tribes, fishing groups and environmental organizations, sent a letter to Jim Watson of the Sites Project Authority on March 17 indicating their concerns about the detrimental impacts that water diversions from the controversial Sites Reservoir Project pose to salmon and water quality.

The project is backed by Rep. John Garamendi, D-Walnut Creek, who introduced the Sites Reservoir Project Act (H.R.1435) to provide federal support for the construction of Sites Reservoir and related water infrastructure in Colusa and Glenn Counties. Congressman Doug LaMalfa (R-CA) is the bill’s original cosponsor.

“Construction of Sites Reservoir would bring California closer to achieving a drought-resilient water system. Our state needs to make forward-looking investments to meet its future water supply needs, and Sites will benefit farmers, precious ecosystems, and our communities.” said Congressman Garamendi (D-CA). “I am proud to sponsor the bipartisan Sites Reservoir Project Act, building upon the nearly $1.2 billion in public funding for the project secured to date.”

Likewise, Congressman Doug LaMalfa (R-CA) said: “Water storage projects, such as Sites Reservoir, are absolutely critical to securing the future of our state’s water supply. It’s important that we have the infrastructure to save more water during wet years so we can prepare for the dry ones California sees all too often. Sites is the most effective project in the state, providing more storage per dollar invested than any other proposed project. I’m proud of this bipartisan effort and will continue to fight to ensure this much-needed project moves forward.”

The Sites project, a proposed off-stream storage reservoir near Maxwell, would store water pumped from the Sacramento River and the Trinity River, a major tributary to the Klamath River that is also diverted to the Sacramento via a tunnel through the Trinity Mountains between Trinity Reservoir and Whiskeytown Reservoir.

However, critics say the project would imperil salmon runs on California’s two largest salmon rivers, the Sacramento and Klamath River systems, that supply the majority of Chinook salmon harvested by commercial, recreational and Tribal fishermen in California. In 2017, all recreational and commercial fishing for Klamath River fall Chinook salmon was closed on the ocean in the Klamath Management Zone (KMZ), while all recreational and tribal commercial salmon fishing was closed on the Trinity and Klamath rivers, due to the low numbers of fish returning to spawn.

In a press release, the groups and Tribes allege that the Sites Project Authority “has left out key facts in their environmental review which serves to downplay impacts.”

“We are here to demand a full accounting of the environmental impacts to the Trinity and Sacramento Rivers,” said Noah Oppenheim, executive director of the Pacific Coast Federation of Fishermen’s Associations. “Both rivers have suffered a steady decline in fisheries for the past several decades and most experts see dams and diversions as the reason. The declines in salmon stocks have crippled California’s salmon fleet, diminished recreational fishing opportunities, and undermined Tribal fisheries and cultural practices.”

“The California Water Commission has awarded $816 million in state bond funds for the project, yet our review shows serious impacts to Sacramento River, Klamath River, and Bay Delta would stem from operations of this reservoir,” said Oppenheim. “These rivers sustain California’s commercial fishing industry, and they’re already severely over-appropriated. We have already lost 90% of our fleet due to poor water management, and we cannot afford to lose more salmon or more jobs.”

The coalition identified a number of issues they said “were not adequately addressed” in the Draft Environmental Impact Statement and Report (DEIS/EIR) that was released in late 2017. These include:
●       A discrepancy in minimum required flows for fish in the Sacramento River
●       The lack of a clear operations plan
●       No formal consultation with affected Indian Tribes
●       Lack of compliance with the California Endangered Species Act
●       Failure to disclose impacts to the Delta
●       Failure to disclose numerous water quality issues such as mercury methylation from inundation of mine tailings, increased potential for algae blooms and salinity impacts
●       Failure to describe the steps to obtain federal approvals for a hydropower facility

“The California Department of Fish and Wildlife has recommended a much higher minimum bypass flow in the Sacramento River than is being proposed by the SPA (13,000 cfs compared to 3,250 cfs at Red Bluff, 4,000 cfs at Hamilton City and 5,000 cfs at Wilkins Slough),” the letter states. ” The impacts to the Sacramento River fishery have not been adequately described in the DEIS/EIR, nor is there an alternative analyzed in the DEIS/EIR that would provide the flow recommendations by CDFW.”

Coalition representatives presented their concerns to the California Water Commission (CWC) at its meeting on March 20 in Sacramento. The coalition also plans on presenting their request to the Sites Project Authority in April.

Recreational and commercial fishermen are not the only ones concerned about potential fisheries impacts from the Sites Reservoir. Tribes from the Sacramento and Klamath River watersheds, who have lived in the watersheds since time immemorial, have also asked for fisheries protections from the Sites Authority.

“We are concerned that tribes have not been consulted nor assured that this project will not take water that salmon need, especially drought years,” stated Caleen Sisk, Chief and Spiritual Leader of the Winnemem Wintu Tribe. “If the Sites Authority had initiated Tribal consultation with Klamath River and Sacramento Tribes, we would have identified these issues, along with mitigations measures to protect the salmon.”

The coalition also identified undisclosed impacts and lack of mitigation for the Trinity and Lower Klamath rivers. These impacts led the Karuk Tribe on the Klamath River to similarly request recirculation of the DEIS/EIR and government to government consultation on the matter. In a letter to the Sites Project Authority, the Tribe cited impacts to the Trinity and Lower Klamath River that were not analyzed in the EIS but identified by an independent scientific analysis.

Morning Star Gali, Pit River Tribal Member and organizer for Save California’s Salmon, confirmed the lack of Tribal consultation regarding the Sites project when she spoke during the public comment period at the California Water Commission meeting on March 20.

In addition, Tom Stokely with Save California Salmon, who also spoke at the Commission meeting, noted that the Sites Project could impact cold water flows that are needed to avoid fish kills like the one that took place in September 2002 on the Lower Klamath River, where over 38,000 salmon perished due to an outbreak of disease in low, warm water.

“The Sites Project Authority had promised there would be no impacts to the Trinity River from Sites,” said Stokely. “However, a hydrologist found that the project will increase water temperatures for spawning fish in the Trinity River during dry years.”

“The project also promises to deliver water to the new reservoir and its customers that is already committed to the Trinity and Lower Klamath rivers to prevent another huge adult salmon fish kill like the one experienced in 2002 on the Lower Klamath. Until these issues are analyzed and resolved in a revised environmental document we cannot support California’s decision to fund and promote the Sites Reservoir,” concluded Stokely.

If built, Sites reservoir would be owned and operated by the Sites Joint Powers Authority, a regional consortium of local water agencies and counties formed in 2010. To date, more than $1.2 billion in public funding has been committed to the Sites Reservoir Project, including $816 million from the State Water Bond (2014 Proposition 1), $449 million low-interest financing from the U.S. Department of Agriculture announced in November 2018, and federal funding from the Bureau of Reclamation for the feasibility study and related work, according to Garamendi’s Office.

A map of the Sites Reservoir Project is available here: https://www.sitesproject.org/wp-content/uploads/2018/08/Sites_Overview_Brochure_August2018-1.pdf