Larry Valderrama of Stockton won first place in the adult division of NorCal Trout Anglers Challenge (NTAC) event at Lake Amador on Saturday, March 23, by catching a 7.79-pound rainbow trout.
The angler was fishing with his wife, Mary, from shore when the big trout hit his Rooster Tail spinner in the launch ramp cove.
“It was the only fish either of us caught,” he said. “After it hit around 9:30 a.m., it took about five minutes to bring in. It’s my personal best trout in my 20 years of fishing the local lakes, including Amador, Pardee, Camanche and Rancho Seco.” 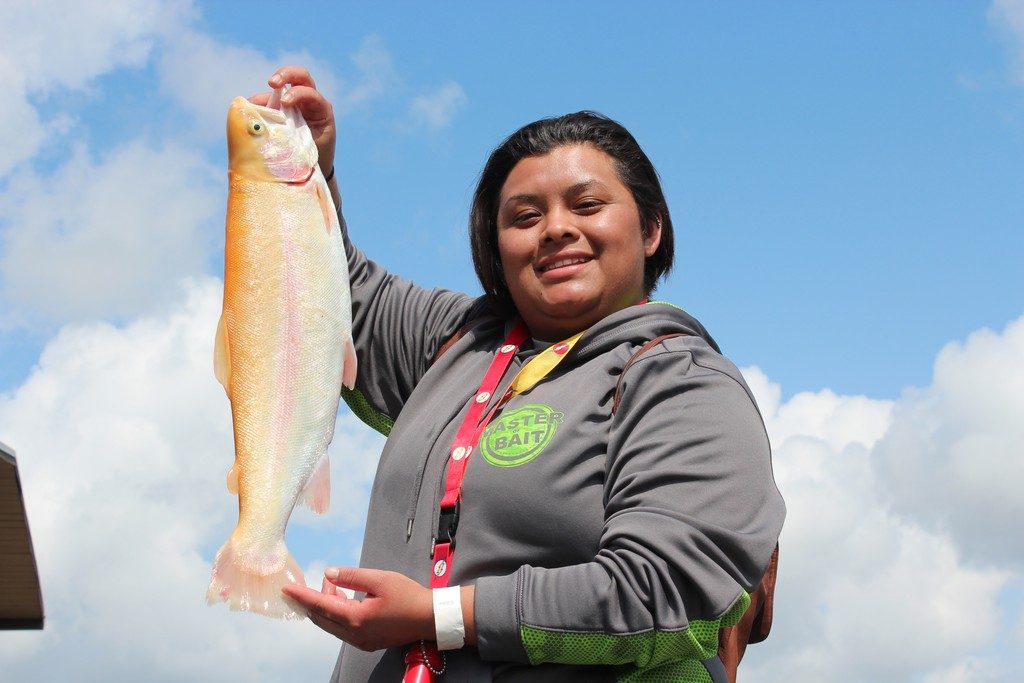 The morning started with some heavy rain, but anglers enjoyed beautiful spring weather on the Mother Lode reservoir the rest of the day.
“The third event of the 2019 NTAC season is in the books and we want to thank all 166 anglers that participated for being part of all the fun,” said Vince Harris, President of Angler’s Press Outdoors, the organization that created and hosts NTAC events. “We look forward to hosting the next big event at Collins Lake on April 13.”
Rich Peterson placed second in the adult division with his 4.79-pound fish, while Jeff Garcia placed third with a 4.63-pound trout in the event sponsored by Gone Fishin’ Marine and Lasher Elk Grove Ram and hosted by Angler’s Press Outdoors and the Fish Sniffer magazine.
The fourth through tenth place winners were: (4) Susy Martinez, 4.51; (5) Jimmie Trejo, 4.31; (6) Chase Ensweiller, 4.19; (7) Jimmy Wynne, 4.12; (8) Adam Chollet, 4.1; (9) Bruce Alger, 4.08; and (10) Mark Wixon, 3.84 pounds.
Twenty-four anglers fished in the youth division, with 11 weighing in fish. Joey Hill, Jr. who had just won the NTAC event youth division at Pardee, also won first place in the Amador event with a 4.44-pound cuttbow. He was fishing with his dad, Joe Hill Sr., during the event.
Ryder Salveson placed second with a 2.91-pound. trout, while Derek Carlson placed third with a 2.76-pound fish.
The fourth through tenth place winners in the youth division were: (4) Jacob White, 2.6; (5) Harvey Levin, 2.22; (6) Ricardo Diaz III, 2.16; (7) Ryder Peterson, 191; (8) Blane Ebojo, 1.63; (9) Bella Bender, 1.2; and (10) Shayden Seda, 1.2. 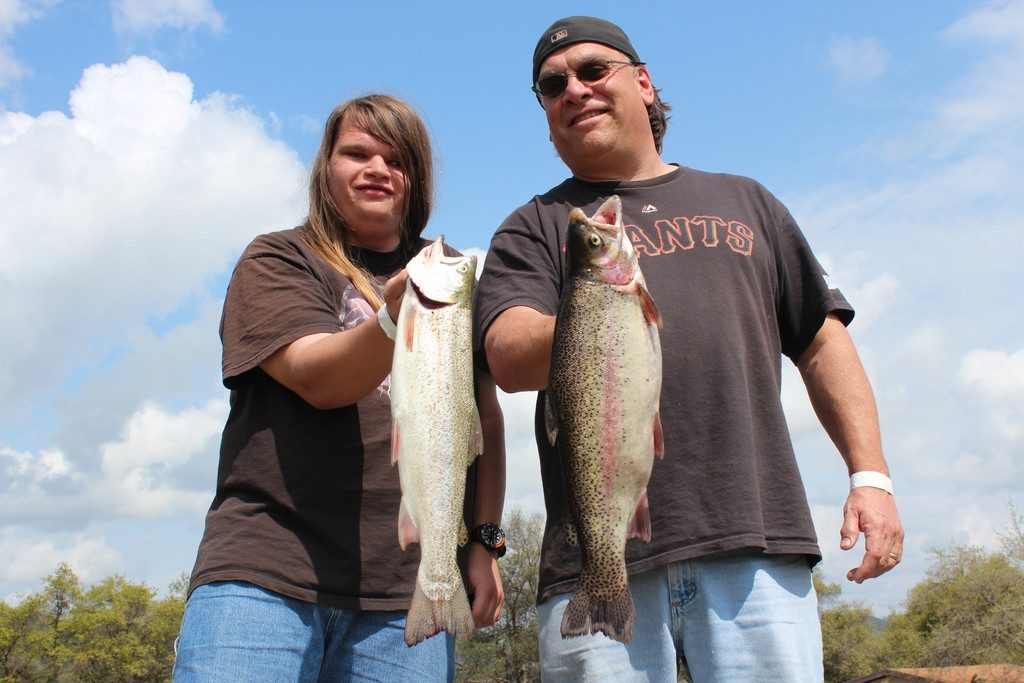 One angler won $100 and a tackle box filled with Rooster Tail lures for catching a trout while using a Rooster Tail.
Sponsors of the event included Gone Fishin’ Marine of Dixon, Lasher Elk Grove Ram Thomas Lures, Silver Horde, Yo-Zuri, Mack’s Lure/Shasta Tackle, Hot Spot/Apex, Rapala, Luhr Jensen, Dick Nite Spoons, Yakima Bait, Berkley, Pro-Cure Bait Scents and Fisherman’s Warehouse. Daiwa is sponsoring the 2019 NTAC Daiwa Angler of the Year Award.
Anglers hooked a mixture of beautiful cuttbows, rainbow trout and lightning trout raised in the lake’s on site fish hatchery. Fishermen landed the trout while fishing PowerBait, spinners and spoons from shore and while trolling Rapalas, Kastmasters and other lures from boats.
Lake Amador’s has planted a total of 21,500 pounds of trout from mid-October to present. “We’re currently stocking a mixture of Bonneville cuttbows, a cross between a Bonneville cutthroat and rainbow trout; Donaldson cuttbows, with heavy steelhead genetics; rainbow trout; and Lightning Trout,” said Lee Lockhart of the Lake Amador Resort.
The Lightning Trout is a unique breed of rainbow trout (Oncorhynchus mykiss) featuring vibrant, yellow, orange and pink colors. Like other trout raised at Lake Amador’s on-site hatchery, the fish being stocked in the lake now have deep orange or pink flesh similar to king salmon, due to the krill-based food they eat, according to Lockhart.
The Lightning Trout (or Golden Rainbow Trout) “is a gold-orange rainbow trout raised under artificial fish culture conditions and stocked as a novelty for angling sport. The golden rainbow was developed from one fish, a single female trout with a genetic mutation that gave her a mixed golden and normal rainbow trout coloration.” For more information., go to: http://www.yorkccd.org/wordpress/wp-content/uploads/2009/12/Golden-Rainbow-Trout.pdf)
Lake Amador boasts an ambitious trout planting program from October through Memorial Day weekend (weather permitting).
I once caught a five fish limit of rainbow trout, in addition to releasing numerous other fish, off the dock at Amador in the late spring while tossing out golden grubs. It was one of the most beautiful limits of trout I have ever caught at a California lake.
Each fish was square tailed and silvery like a fresh-run steelhead and ranged from 3-1/2 to 4 pounds. In fact, a friend I showed the fish thought I had just gone to the American River and chided me for “keeping over my limit.” I told him the fish were not American steelhead, but rainbows from Amador. He was shocked.
The hard fight that Amador’s own hatchery-raised trout have historically provided anglers, along with their beautiful fins and colors, are due to the unique strains of fish grown here and the conditions they are raised in.
First, the hatchery raises the fish in tanks 5 to 6 feet deep, rather than 18 inches deep like other hatcheries, making for better growing conditions.
Second, when the fish reach the age of 8 months and are taken out of the raceways, they are raised in 7 octagonal tanks with a constant current running through them. Swimming in the current forces the fish to become strong and healthy. 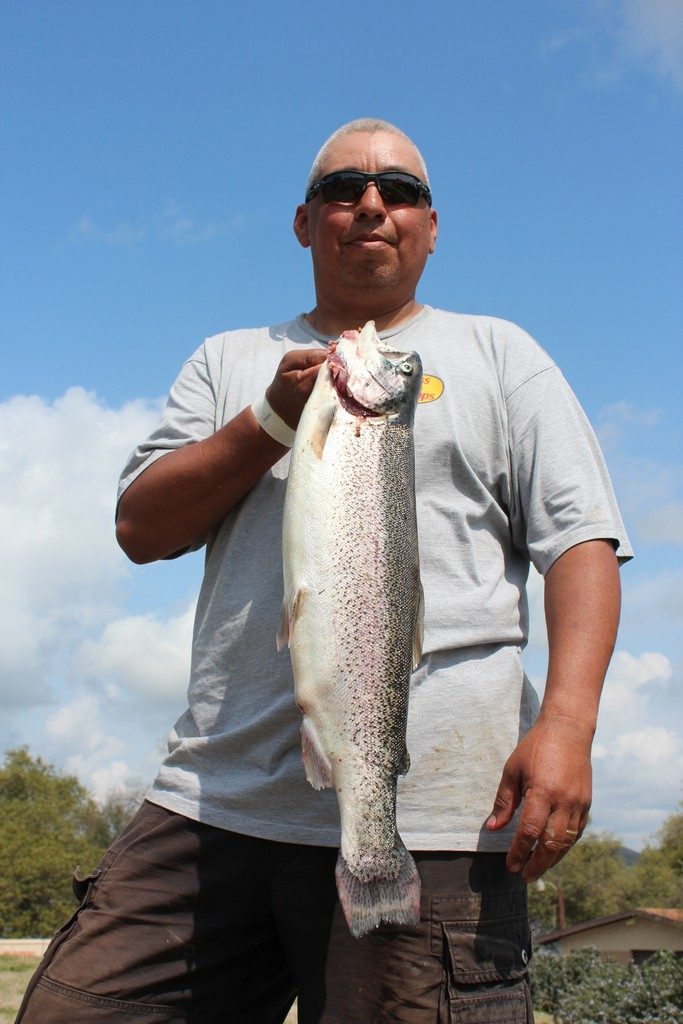 Third, the resort uses top quality “EWOS” food to raise their fish. Since it includes krill and sardines, it helped give the fish’s flesh their unique pinkish orange color.
Fourth, the lake management keeps the amount of fish in the hatchery at a lower density than the state and other hatcheries, so the fish display squared, rather than rounded, tails.
Fifth, the quality of the fish they raised also has to do the unique strains of fish they raise. While they first spawned fish from brood stock, they began buying eggs because it was less expensive.
“We raised kick-ass fish that fought like hell,” said Lockhart. “However, because costs to raise fish have tripled, we aren’t going to be able to raise 100,000 fish per year like we used to.”
But trout isn’t the only fish you can catch at Amador. You can pursue Florida-strain/northern strain hybrid largemouth bass, channel catfish, crappie, bluegill, redear sunfish. A sleeper trophy carp population inhabits the lake, with carp up to 50 pounds landed by anglers.
Threadfin provide abundant forage for bass, catfish and crappie in the impoundment.
A family owned and operated business since 1972, Lake Amador Resort is located in the beautiful oak-studded foothills of the Sierra Nevada only one hour from Sacramento and Stockton, and only two hours from anywhere in the Bay Area,
The 1300 acre facility offers a heavily stocked 400 acre lake, with updated dual lane boat launch and a large fishing dock for shore anglers. The facility also features a huge campground with hot showers, flush toilets and large shady oak trees as well as a full hookup RV Park
The Lake Amador Clubhouse offers free Wifi, a pool table, horse shoes, foosball and TV. The Clubhouse features a beer bar, as well as The Tackle Box Café, where you can eat a delicious breakfast and lunch.
For more information, call: Lake Amador, (209) 274-4739, http://lakeamador.com. For more information about the NTAC, call Vince Harris, (916)768-0938, www.anglerspress.com.