The center of the pool was chaotic with confused current, whitewater and bubbles. In a strip of calmer water closer to my side of the river, but still an impossibly long cast from the bank there were at least four trout repeatedly rising. 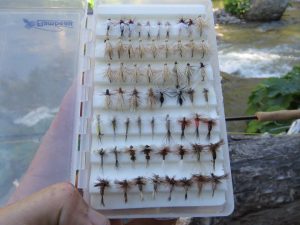 Rusty colored mayflies were in the air and that’s what the trout were targeting. I had some No. 18 rust color parachutes in my box. I tied one on.
Carefully I eased into the current. Inching out I eventually reached a point about 15 feet from the bank. With the water up past my waist, I could go no further.I made a single false cast and dropped the fly well up current of the seam holding the fish. I manipulated the line to insure a drag free float…
When a trout’s snout deliberately broke the surface and inhaled the parachute instinct took over. My left hand stripped back on the line as the rod tip went skyward. Feeling the sting of the hook the trout started gyrating, bolted toward the middle of the river, exploded from the water on a wild jump and tossed the hook. The entire incident played out in mere seconds.
I spent the remaining hour of daylight working that seam and ended up hooking a total of seven rainbows, but I was only able to land and release three of them due to the current and the intense fighting ability of the 12 to 16 inch wild ‘bows.
The action I just described took place in the Middle American about a 15-minute drive from Auburn, California.

Few folks realize that the Middle American holds rainbows in excess of 5 pounds and browns that can top 10. The fish are wild since the river hasn’t been planted since the 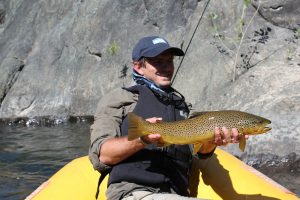 ‘60’s. It’s the lack of truck trout that keeps the river off list of potential destinations for the majority of trouters.
“The Middle American’s trout are aggressive and catching them generally isn’t a problem, says veteran river rafter and angler Roger Lee.
“The river gives up more rainbows then browns, but the biggest fish are generally browns. I practice catch and release, keeping only a few smaller fish once in a while, I don’t weigh the big fish that we catch. We’ve landed a lot of big browns over the years, that I’d estimate to be in the 5 to 7 pound class. The largest brown I’ve ever measure was 28 inches long,” related Lee.
“I’ve been fishing this river long enough that some patterns have emerged. First of all, the largest fish most often come from deepwater pockets that are adjacent to the current right next to the bank,” Lee continued.
You’ll find dry fly action on the Middle Fork at times, but it isn’t the norm. Dark colored nymphs in the No. 12 to 16 range produce the most consistent results from numbers of average size fish.
The river has a robust scuplin population and it is sculpin imitations that often tempt the big browns. These fish hold in deep water and it takes sinking lines and heavily weighted flies to get them in most cases.
For those that learn the secrets of the rugged Middle American, the rewards are often great!