Adam hurled a cast towards the middle of the clear still waters. I instructed him to prop the rod up against my backpack so he could detect a bite. As he positioned his setup, the rod tip started violently shaking. “You got one!” I quickly relayed.
Adam played the fish back to the concrete shore, where we quickly put it onto his stringer. I wasn’t expecting such quick success, and I hadn’t even brought my usual ice chest to pack the fish on.
The scene took place at about nine o’clock on a beautiful Saturday morning at Hagen Community Park in Rancho Cordova. My son Adam and I are fortunate to have a nice fishing boat, so we don’t typically fish off the shore. This trip was a special occasion.
Adam’s Cub Scouts pack was attending a ‘Fishing in the City Program’ event sponsored by the California Department of Fish and Wildlife and the Cordova Recreation and Park District. This unique program offers the opportunity for kids who don’t typically get to experience the outdoors a realistic chance of catching fish.
According to the California Department of Fish and Wildlife website, ”The Fishing in the City Program was established in 1993 and serves Californians living in the Sacramento, San Francisco and Los Angeles metropolitan areas. 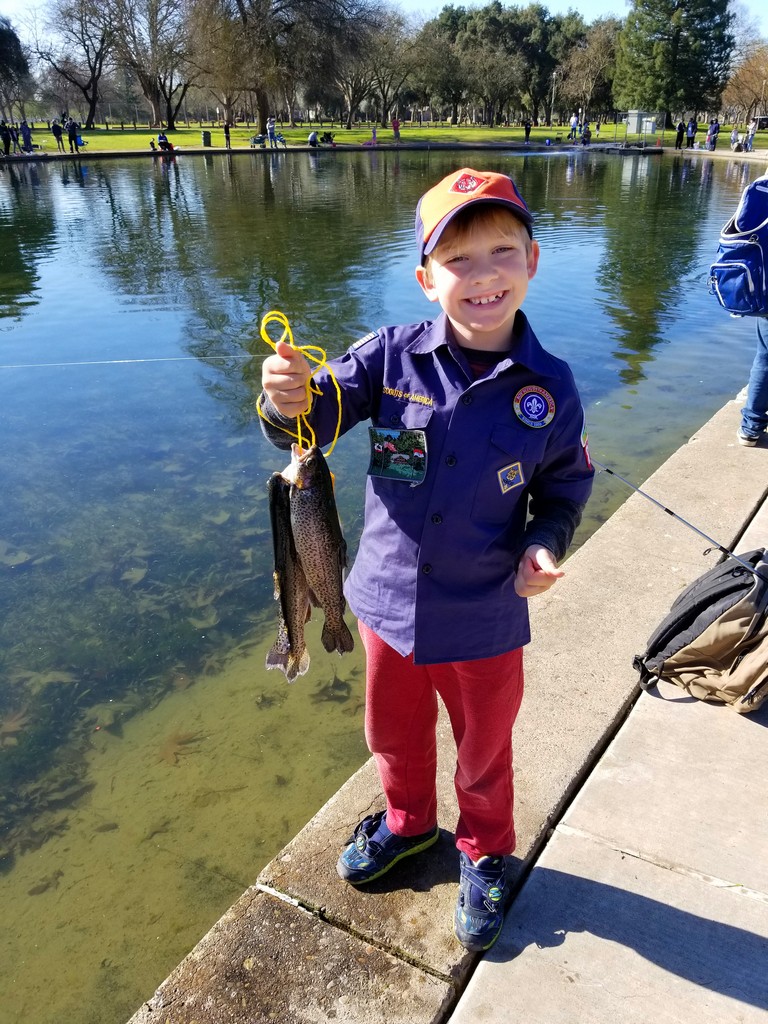 The goal for the Sacramento area program is to teach youth and their families the importance of taking care of lakes and ponds while enjoying them, starting right here in their own back yard. We stock nine inner city ponds in the Sacramento area on a regular basis. We want families to come out and spend time together while learning to fish.
Each “learn to fish” clinic, held at 8:00 a.m., teaches fishing techniques, ethics, and safety while out fishing. We will also provide information about current ecological issues and ideas on ways you can help us conserve our state’s natural resources.
The clinics and the use of our rods are provided free of charge for children ages 5 to 15. Those over 15 who possess a fishing license may also fish after 12:00 p.m., after the clinic is over.
Ponds stocked with Channel Catfish (April – October) and Rainbow Trout (November – March)”.
Although my family spends a good amount of time fishing together, there isn’t always a lot of time to slow down enough for teaching moments on the water. This event was a great opportunity to show Adam some of the basics that we often skip over while trolling from our boat.
Our event started off with a DFW representative holding a brief class on the basics of fishing and ecology. Next, we were off to a knot tying class hosted by professional fishing guide Don Paganelli. I’ve seen Don’s knot tying seminars in the past. In fact, I learned how to join mono to braid using a double uni knot at one of Don’s Fisherman’s Warehouse seminars in Sacramento years ago.
After the knot tying class, we were off to practice casting on the lawn. Adam had a tough time casting plastic plugs using their spincasting setup, as he is used to his standard spinning reel. As he was finishing a successful cast, the announcement was made to start fishing. We grabbed our gear and hurried off to our spot near the middle of the pond.
Several Cub Scout families joined us, and soon rainbow trout were flying over the sides of the bank. A DFW representative told me that about 1,000 pounds of trout had been planted. It was apparent, because kids all around the perimeter of the pond were reeling in fish after fish. The action was hot and heavy until about ten o’clock when it tapered off. Soon after, Adam and I had to leave for a Little League game. He had four trout on his stringer, which he proudly showed to anybody willing to listen. 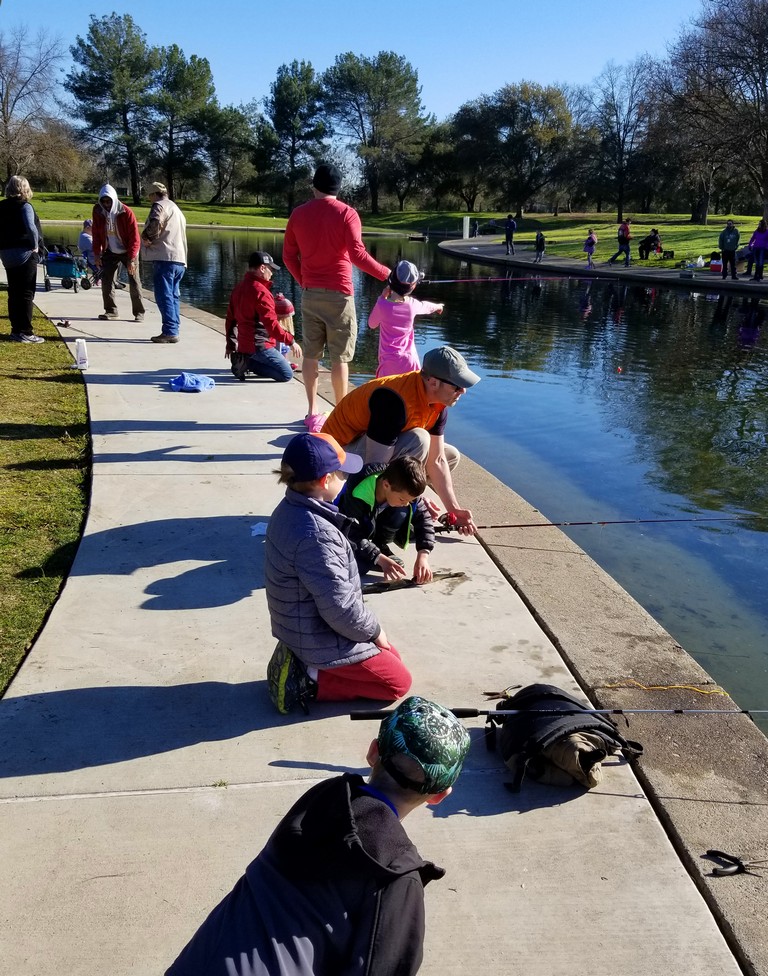 Adam found success using pea-sized balls of green Berkley PowerBait floated over a sinker about 2 feet off the bottom. Other kids were catching trout on other types of dough baits, as well as small crappie jigs and spinners. It was a good opportunity for experienced kids like Adam to learn how to deal with line tangles, crossovers, and other typical issues when fishing in crowds. It was a nice relaxed atmosphere to learn some basics. Everybody was having a great time.
We stopped at the check-in station on the way back to the truck to thank the volunteers for putting on the event. I grabbed some ice at a gas station just outside of the park and packed Adam’s trout on ice for the trip home.
I’d like to take this opportunity to thank all of the sponsors and volunteers who made the event such a great success. There are several upcoming ‘Fishing in the City Program’ events in the Sacramento area, including Saturday April 20 at Granite Regional Park and Saturday April 27 at North Natomas Regional Park. Be sure to check out the website www.wildlife.ca.gov/Fishing-in-the-City for confirmation of dates and more details.