Years ago, when I was youngster stream fishing for trout was a big deal. The opening day of the trout season was something you got excited about and prepared for. Looking back, I remember going through my canvas creel and later my fly vest weeks before the April opener to make sure I had gear to cover every possible situation.
These days things have changed. Sure, plenty of trout anglers still fish streams, but I believe that the outstanding year around trout fisheries that have developed in many of our foothill reservoirs has stolen some of the steam that stream fishing held in days gone by.
Reservoirs hold certain advantages over streams. First reservoirs are easier to access than streams because they are typically closer to population centers. Second, the trout in reservoirs average bigger than those caught in most streams. Finally, reservoir fishing, be it from a boat or the bank, is easier and less labor intensive from a physical standpoint as compared to scampering along a rocky river bed as you weave in and out of the brush.
Yet, there is something intensely satisfying about stream fishing. The surrounds are beautiful and the sport is reduced to its quintessential foundation of man versus trout without the complications of downriggers, electronics and vast expanses of deep water. 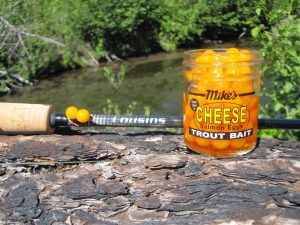 I’d wager that there are three types of anglers reading this article. There are those that currently stream fish, some that stream fished in the past but have not done it in a long time and those that have never given it a try.
For the hardcore stream anglers, most of this article will be a review, but I’ll discuss a few new kinks that will likely make you even more effective. For anglers that fall into the other two groups we’ll go over everything that you need to know to get out there this season and enjoy some great trout fishing action the way it was meant to be…in a stream!
At the center of any stream anglers tackle assortment is their rod and reel. Now as with most angling endeavors a variety of different rod and reel combos will work, but for maximum efficiency a rod that is matched to the specific task at hand will help you achieve the best results.
Over the years, I’ve come to believe that a light 7’ graphite spinning rod with a fast action tip matched with a small spinning reel boasting a smooth drag is the best choice. With a rig like this you can fish both baits and lures effectively on both small and large streams.
In terms of line 8 pound test is good, 6 is better. I like to spool up with Yo-Zuri TopKnot Fluorocarbon, but standard line will work too.
One of the things that I enjoy about stream fishing is its simplicity and nowhere is that simplicity better illustrated than the in the end tackle that is used. When fishing from a 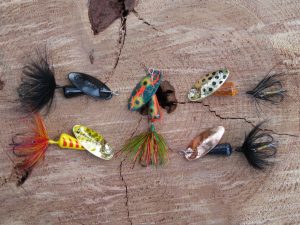 boat you have the luxury of carrying an extensive array of tackle, but when stream fishing you are limited to the gear that you can carry comfortably in a creel or vest as you hike from spot to spot.
Natural bait, synthetic bait, flies and lures all have their place in the stream angler’s arsenal. For fishing natural and synthetic bait, you’ll need a selection of bait holder hooks in sizes 8, 10, 12 and 14 along with good assortment of small to medium sized removable split shot. When fishing with bait depth control and the speed of drift is of utmost importance and you’ll want the versatility to make small weight adjustments that keep your bait drifting naturally along the bottom.
In addition to the hooks pick up a few small wobbling spoons, spinners and flies. My favorite stream fishing spoon is a 1/8 to ¼ ounce gold Kastmaster.
When it comes to spinners I use Panther Martins and Rooster Tails almost exclusively. I really like black and dark colored spinners, but shiny models have a place in your gear selection too.
Your arsenal of flies doesn’t need to be extensive. A few No. 8 black, brown and olive woolly buggers and a few medium to small size nymphs will get the job done nicely.
As far as natural baits I go with baby night crawlers and salmon eggs. Sometimes I might toss in crickets if they are available. Crawlers and eggs are at their best early in the season, while crickets come into their own with the arrival of summer.
In recent years, the folks at Berkley have come out with a number of interesting and effective synthetic baits for the stream angler including Micro Power Nymphs, Gulp! Worms and Gulp! Crickets. These synthetic baits are effective substitutes for live baits. They have a long shelf life and you don’t have to worry about them dying and spoiling the way you do when using worms and crickets.
With rod, reel and the rest or your gear in hand along with a selection of bait it is time to get out on the water and catch some trout. Presenting baits and lures in streams goes hand in hand with predicting where trout will be holding. 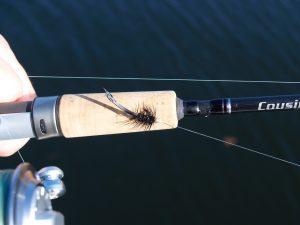 The overriding factor when fishing streams is current. Trout reap benefits from current in the form of the forage, security and oxygen it provides for them. However, current is also a liability because it causes stream trout to expend more energy than they would in a still water environment. Stream trout don’t want to hold in slack water near the bank because they feel vulnerable to predators in these areas, but they don’t want to hold directly in the current either because they will burn more calories than they can replace. As a result, trout will generally be found holding near objects that break the current or in locations that feature swirling currents and eddies.
Anytime the current is broken, say by a large rock or a submerged log a pocket of nearly slack water forms directly next to the object on the downstream side. Trout like set in these pockets because it allows them to burn a minimal number of calories while having access to all the forage items being swept past the pocket.
The most important factor when presenting worms, eggs and synthetic baits is that they need to drift along the bottom at the same speed the water is flowing. This is known as making a drag free drift. Moving and fishing upstream against the current allows you to make a natural presentation with bait.
Achieving a drag free drift is where a good selection of split shot becomes important. Getting a drag free drift while fishing a rock in 4 feet of water will require more weight than fishing a similar rock in a foot of water. When you are first getting started, you’ll have to experiment a good deal to achieve the correct weight for a natural drift. Once you’ve gained some experience a quick glance at the spot in question will give you a pretty good idea of how much weight you’ll need.
When drifting bait, often times the bite is signaled by nothing more than the line stopping at other times you’ll feel a tap or two. When either occurs lift the rod and feel for a fish. If something is detected drive the hook home and start fighting that feisty trout. 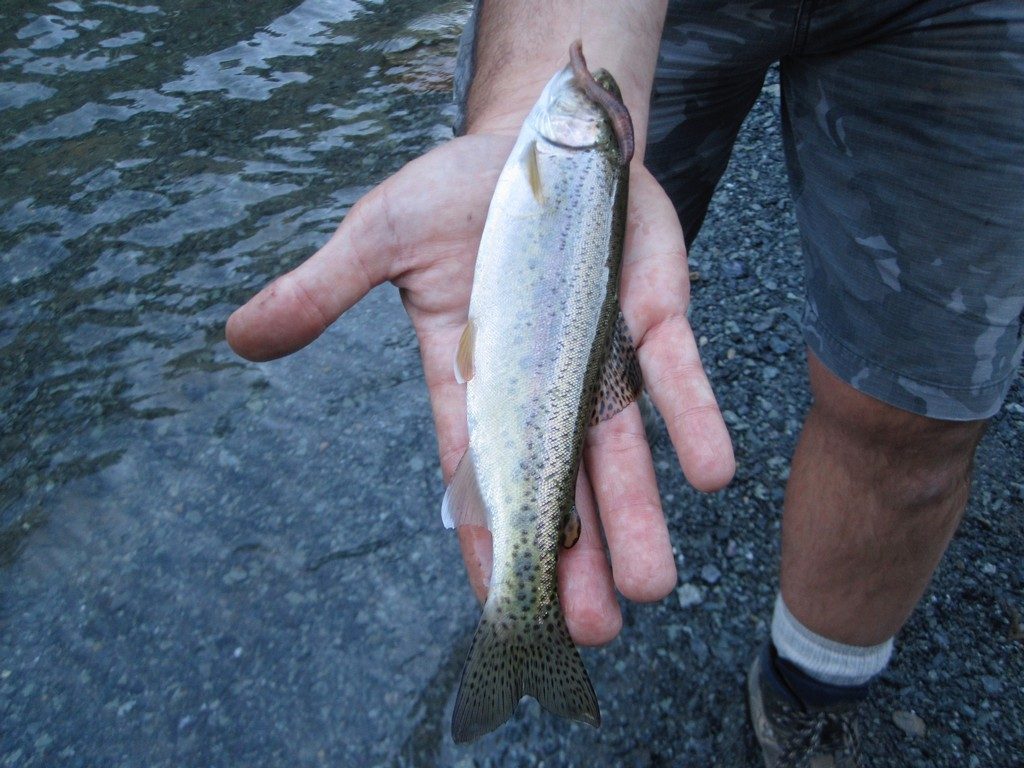 Bait is great, but when you can catch fish on lures or flies that’s even better because you don’t have to fuss with re-baiting all the time. These offerings should be fished with enough added weight to keep them near the bottom as with fishing bait, but the actual presentation is quite different with the exception of nymphs that are fished exactly like you’d dead drift a salmon egg on a semi-tight line.
Lures and wet flies like woolly buggers, are tossed directly across or slightly downstream and allowed to swing across the current on a tight line. Once they’ve reached a point directly downstream, let them to hang in the current for several seconds while pumping the rod tip a couple times before slowing reeling in. After a few casts move downstream to the next spot and repeat the process.
Strikes on lures and wet flies are generally pretty distinct and the trout almost always hook themselves when they turn back downstream after rushing up and grabbing your offering