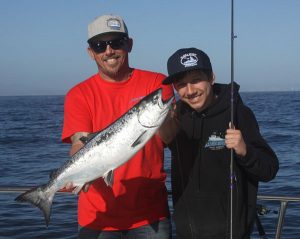 Rohnert Park, Ca. – As salmon fishing raged in Monterey Bay and off the San Mateo County Coast, the Pacific Fishery Management Council adopted ocean salmon season recommendations that provide recreational and commercial opportunities for most of the Pacific coast, and achieve conservation goals for the numerous individual salmon stocks on the West Coast.

Season recommendations will be forwarded to the National Marine Fisheries Service (NMFS) for approval. “Although some salmon stocks are returning in stronger numbers than last year, balancing fishing opportunities with conservation is always a challenge for the Council, its advisors, fishery stakeholders, and the public,” said Council Executive Director Chuck Tracy. “The seasons this year continue to protect stocks of concern, including Puget Sound Chinook, Washington natural coho, and Sacramento River fall Chinook.”

In addition to recommending salmon regulations for 2019, the Council developed a plan to work collaboratively with NMFS on Southern Resident killer whales, which are listed under the Endangered Species Act.

“This year’s package was adopted after careful consideration and analysis in order to meet our conservation objectives, consider impacts on the prey base important to Southern Resident killer whales, and consider in-river and Puget Sound fisheries,” said Council Chair Phil Anderson. “The Council also established a workgroup that will be working closely with National Marine Fisheries Service to assess on a longer term basis the ocean salmon fisheries effect to the prey base of Southern Resident killer whales,” Anderson said.

South of Cape Falcon, fisheries target Sacramento and Klamath fall Chinook and hatchery coho from Oregon and the Columbia River. California coastal Chinook and Oregon coast natural coho stocks are the primary constraints to fisheries in this area. Most areas are seeing improved opportunity over last year.

Fisheries from Humbug Mtn., Oregon to Horse Mtn., California will be open from May 25 through September 2. The Oregon area also includes a mark-selective coho fishery opportunity in mid-summer.

Fisheries from Horse Mtn. to Pigeon Point (Fort Bragg and San Francisco areas) will be open from April 13 through 30, then re-open May 18 and continue through October. The area from Pigeon Point to the U.S./Mexico border (Monterey area) is open now through August 28.

For details on all seasons, please see the season descriptions on the Council website.

Management Process: The Council developed three management alternatives in early March for public review and further analysis. The review process included input from Federal, state, and tribal fishery scientists and fishing industry members; public testimony, and public hearings in Westport, Wa.; Coos Bay, Or.; and Ukiah, Ca. The Council received additional scientific information and took public testimony at its April meeting in Rohnert Park, Ca., before taking final action. The decision will be forwarded to NMFS for their review and regulatory action.

In addition, the coastal states will independently adopt fishery regulations that are compatible with the Council’s actions.

At its April 2019 meeting in Santa Monica, the California Fish and Game Commission took action on a number of issues affecting California’s natural resources, including some great news on Sacramento, Mokelulmne, Klamath and Trinity River salmon seasons and regulations this ;years.

Also in May, the Commission will consider extending fishing in the Feather River an additional two weeks, closing on October 31, and opening 10 additional miles of the Mokelumne River to fishing. The May 16 Commission meeting is via teleconference.

Since February, CDFW held several meetings with the public, fishing interests, affected counties and CESA petitioners to evaluate whether a fishery could happen that would protect the salmon, allow fishing, and provide some economic relief to citizens and counties in the affected area. The Commission voted to reopen fishing on July 1 in both the lower Klamath and upper Trinity rivers with a one fish bag limit and two fish possession limit.

Commissioners received an update from CDFW staff on whale and sea turtle protections in the commercial Dungeness crab fishery, and referred discussion of the recreational fishery to the Commission’s Marine Resources Committee. Marine related items also included an update on CDFW’s transition to electronic commercial fisheries landing receipts (“E-Tix”), an update on the recreational ocean salmon and Pacific halibut seasons, and the publication of the Marine Region Year in Review.